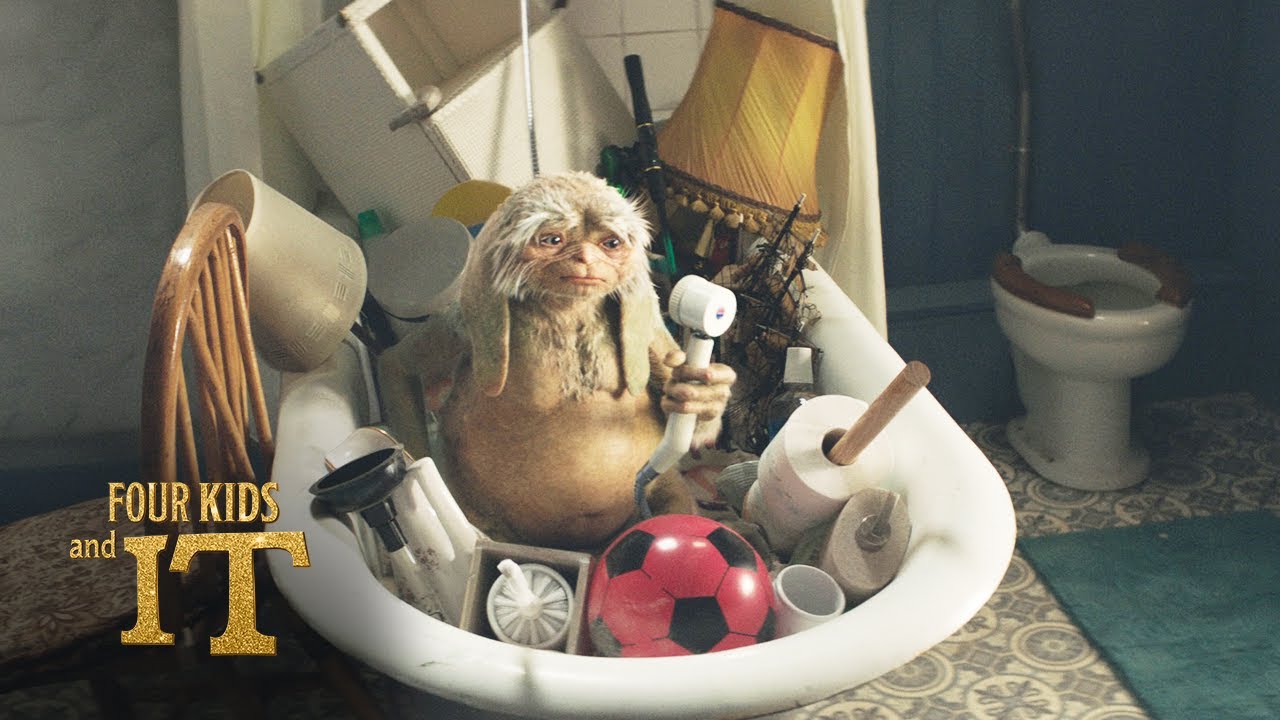 We are living in a world of constant unnecessary sequels. While we have some truly surprising ones that noone asked for, that trend continues with Four Kids & It. The original novel was published by author E Nesbit in 1902 about a sand monster that lives on a beach and grants children wishes. It has been a BBC series, a feature film in 2004 when the world was going YA Fantasy crazy and now we have a odd sequel that is trying to bring it into the modern world with a blended family, fart jokes and Russell Brand.

The movie was set to hit cinemas and due to the ongoing pandemic is finalyl coming to cinemas in Australia (17 Sep and unknown for VIC). Is it worth dragging the family out of the house to watch a movie during a pandaemic? Honestly if the quality of a movie is this, probably not. That being said there is a lot in here that young kids will enjoy. Fart jokes, cute creatures, a blended family that take a holiday together that fight and then love each other at the end, tick. It is all here but probably best left for a Sunday afternoon at home.

The story stars David (Matthew Goode) and his daughter Ros (Teddie Malleson-Allen) and her brother Robbie (Billie Jenkins) they are British, then there is American mother Alice (Paula Patton) and her teenage daughter Samantha (Ashley Aufderheide) and Maudie (Ellie-Mae Siame). Together they dforce their children to meet on a surprise vacation. When things don’t get off to a great start, the kids head to the beach where they encounter Psammead aka It (voiced by Michael Caine) a sand dwelling, wish granting monster who has lived there for hundreds of years. The being can only grant one wish per day and they expire at sunset.

From here the movie takes a fun turn as the kids live out their dreams of being a popstar, time travel and being able to fly. While they are having fun they are under the watchful eye of their neighbour Tristan (Russell Brand), an eccentric collector who lives in a huge musty museum and wants to collect valuable things. Tristan has been tracking Psammead for years and plants a variety of laughter inducing tracing devices on them straight out of an 80’s spy movie.

While the story struggles in parts, it is mainly let down by the US vs. UK thing that starts to really grate on you after a while. This will go over the heads of children but will annoy adults after a while. Performance wise the children are passable for child actors, with the parents a little cringey to watch at times. Michael Caine is the stand out here, he steals every single scene he is in, while the visuals are odd, his cockney twangs and poignant lines are familiar fun and definitely carries the film. Brand was an odd choice as the villain. He isn’t bad necessarily, he is just a bit out of place as this character. I would have liked to see him lean fully into the eccentric side of the character and take it there, but he was quite restrained.

Visually the location in Cornwall is beautiful. The beach and the ocean look inviting and the rolling green hills of the village they are staying in is well showcased during the film. I was quite impressed with the detail of the CGI in Psammead. The character doesn’t look as garish as previous versions and this is probably enhanced by having Michael Caine as the voice.

Look it’s not a total disaster, kids and people unfamiliar with the source material may find some joy here. Those versed in the lore and love for the original book will cringe at the attempt to bring IT into modern times. If you are hard up for movies for the kids this Spring this could be an easy escape, otherwise it is definitely a Sunday afternoon movie at home.

Four Kids and It is now showing in Australian cinemas in states that are open. Novastream was provided with an online screener and did not attend a cinema to review this film. A release date for VIC is currently unknown due to the restrictions.