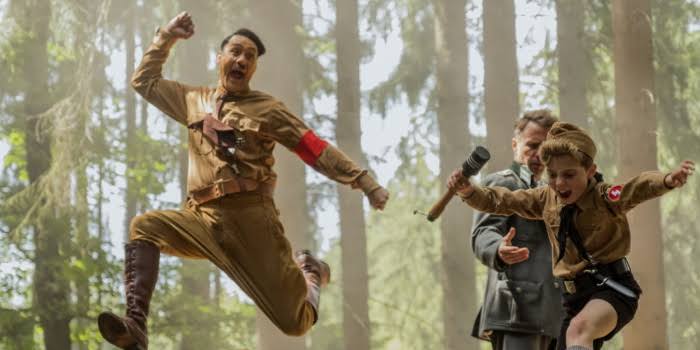 Taika Waititi has crafted a world war 2 comedy infused with some serious dramatic elements to tell a story from the point of view of a radicalised german child. It is a completely different concept and the shift of this point of view really opens up the comedic element while also allowing for an important message to be told. While this movie may not be for everyone, it is a comedic and dramatic story that manages to find a balance with a great story about propaganda and listening to your own voice that shines through.

The story revolves around younger Jojo Betzler (Roman Griffin Davis) a young german boy who walks around in his Hitler Youth uniform longing to get into battle and brags about wanting to hunt down and kill Jews. His mother Rosie (Scarlett Johansson) is clearly gunning for Germany to lose the war and the country to resume some sense of normalcy. When a surprising (and hilarious!) accident renders Jojo unfit for service in the army. His recovery and bed-rest cause him to discover Rosie is hiding a local jewish girl Elsa (Thomasin McKenzie) upstairs inside a wall. The two must learn to attempt to understand each other and as the story moves forward their relationship develops to challenge Jojo’s upbringing.

The most interesting part of this film is the exploration of relationships and how each small interaction between Jojo and Elsa challenges everything that Jojo is being told by his micro universe. The stories he is told like Jews sleep upside down like bats and turn into creatures with fangs and venom, he all takes to heart and believes that it must be real. Similarly Elsa turns out to be a schoolfriend of Jojo’s sister who he didn’t know was Jewish before the war started. The two have this great chemistry that was required to get these scenes just right and really sell the story. As the two bounce off each other in staccattic bursts, it brings things into perspective in the final moments of the film when it dramatically turns into a proper war film with death, destruction and a battle to end it all. Adding into the mix the character of Yorki (Archie Yates) who acts as the humorous anchor of the film always showing up to bring things back down to Earth when they get too serious. Johansson is also fantastic in this film, her role of duality playing both mother and father is literally played out at the dinner table and it is a side that we don’t often get to see.

Having a comedic character like Waititi playing as Adolf Hitler is a bold and risky move, fortunately it comes off perfectly and the balance between dictator, devil on the shoulder and conniving friend is something a less experienced actor may have buckled under. The tone of the film does shift a bit in the last act and fortunately Hitler isn’t around too much for this showcasing the growth of Jojo and a reflection of his surroundings.

Visually the film is unlike any other war film you have seen. The environments are bright and light, Germany is painted as a European paradise with lush forests and bustling cities. The majority of the film is set inside a house and the period furnishings are beautifully detailed with creaky floorboards and woodwork. This all works hand in hand with the score by Michael Giacchino and the drop dead gorgeous cinematography from veteran Mihai Malaimare Jnr. The film feels very Wes Anderson style without being a pale imitation.

Jojo Rabbit is the perfect boxing day release, it is a lot of fun with a different premise and the combination of comedy and drama is balanced perfectly by veteran director Waititi. The performances from the child actors are really strong in this film and their chemistry holds the movie together. Johansson, Wilson and Waititi excel in the adult roles in the film bouncing off the child actors and fleshing out this complicated world that exists in the film. Jojo Rabbit is a comedy worth leaving the house for.