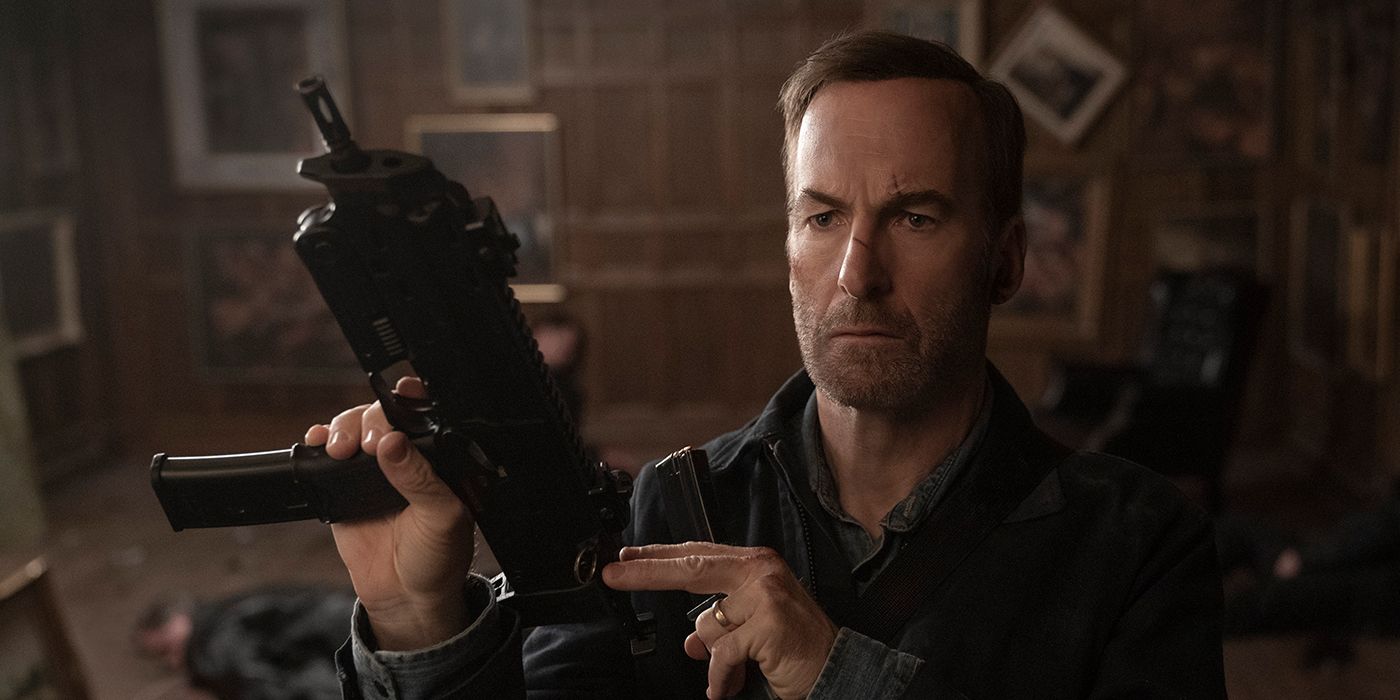 Nobody is the story you know. It’s the character you know. It’s the ending you knew was coming and above all, it’s the outcome you expect the moment you realised what the film is about. And even though you know all that, it’s still a high-energy, clever, choreographed action film that will leave you wanting a second instalment.

Nobody follows Hutch Mansell (Bob Odenkirk) through his mundane life. He lives in a marriage lacking any romance and he can’t remember when or why it stopped. His son despises him. His colleagues, which also happen to be his wife’s family, don’t hold him in much esteem. But worst of all, he always misses bin day.

Things really sink in how much his life hasn’t quite panned out as expected when his family home is invaded as they sleep. Avoiding confrontation and giving into the assailant’s demands, Hutch hands over all the cash he can find. But in a split-second Hutch’s son, Blake (Gage Munroe) jump tackles one of the burglars which throws Hutch into protection mode and a deep-seeded aggression surges up from inside.

Hutch calculates the situation and stands down from making his attack. His family and neighbours ridicule him for not defending the home more vigilantly. But what tips Hank over the edge is his daughter Abby’s (Paisley Cadorath) kitty cat bracelet was stolen by the burglars.

In a quest to find the bracelet the skills Hank once used when the government needed a situation to be taken care of without anyone knowing comes out in full force. And while his body surges with the adrenaline of his long-dormant skills, Hank gets caught up in the moment and takes on the wrong Russian gang.

There is no denying Bob Odenkirk makes this role his own. Bringing in his quirky, awkward persona he truly demands your attention the entire time. It’s the Bob you know just 100 times better. Not only is his line delivery and timing on point, but he also manages to handle a fight scene and its choreography as good as any Jason Statham or Lian Neeson.

And it’s the fight and shoot ‘em up scenes that truly make this film stand out. They are highly choreographed to the point you’d think it was some sort of ballet. It’s best if we don’t think about what trickery was used to make such scenes work, they just worked. These scenes do have a very similar vibe to that of the John Wick films.

And it goes beyond the choreography for John Wick similarities. That’s because the Writer Derek Kolstad and Producer David Leitch of the John Wick films are also that for Nobody. The themes work for both films. A highly trained and skilled assassin is living a normal life only to step out to handle a situation. It’s just Nobody has a comedy undertone.

It would be easy to cast someone with bulging muscles and a history of being to go-to guy for such an action film. But what makes this film relatable is how Hank is not bulging with muscles and he does look just like any Dad down the street.

While Odenkirk leads the cast there are so many more amazing performances. Connie Nielsen who you’ll know as Wonder Woman’s Queen Hippolyta. Nielsen plays Hank’s wife Becca and brings the emotional depth you might not usually see for such an action film. But who truly is a standout, Christopher Lloyd as Hank’s father David. Lloyd is the crazy Scientist, Doc Brown, from Back to the Future giving you instant awesome 80s vibes.

Overall, Nobody is the film we all needed. It’s the nobody kicking the man down and standing up for himself and his family. It’s action-packed with some great comedic lines and the best thing, it’s only an hour and a half.

Nobody is in cinemas March 25 Australia wide.