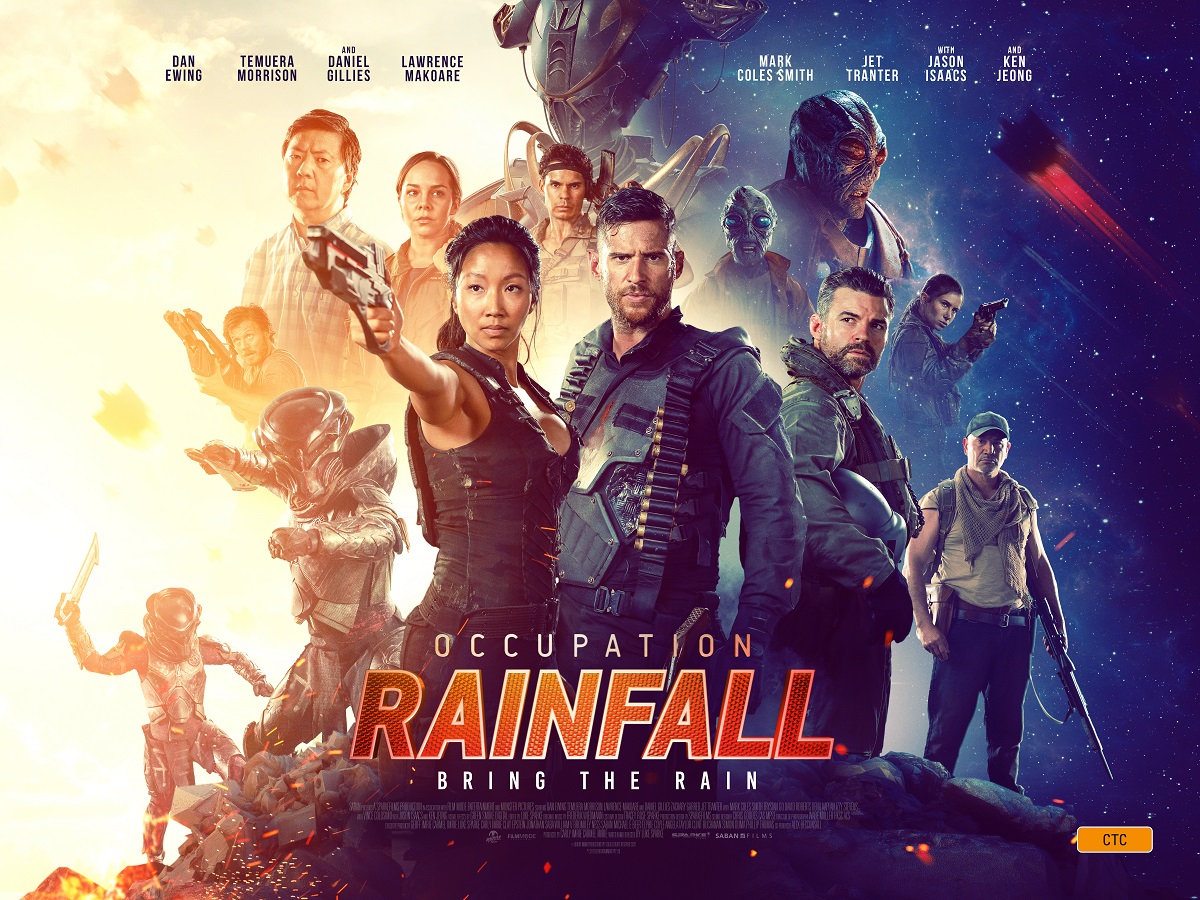 A big blockbuster alien invasion movie is a hard gamble. While Hollywood has millions to splash it out, asking an Australian film company to shell out 25 million for a sequel from a film that was primarily successful on Netflix is a really hard gamble. Fortunately the time is right with Luke Sparke helming hits like Red Billabong and the first Occupation film, Sparke has once again delivered an action packed entertaining sequel that is balls to the wall one of the most entertaining and thrilling sequels that easily outshines the first. There are a ton of special effects, dog fights, explosions and a well rounded out cast of Aussie and international favourites that should see this delight fans of the original and bring in a whole range of new ones into the Occupation universe.

The story revolves around Matt (Dan Ewing) and Gary (Lawrence Makoare) as they travel from Sydney to Alice Springs in search of Rainfall, a rumoured weapon to help turn the tide against the alien war. Joining the crew is Peter (Temerua Morrison) from his community hiding in the mountains, feeling scarily Covid-safe. While this serves as the main story, there is a side plot with Amelia (Jet Tranter) who is held up in the Blue Mountains at a fortress where she works with Commander Hayes (Daniel Gillies) to find out exactly what is going on at the facility and fend off the alien invaders from their recent attack on Sydney.

While some of the story elements work better than others, the movie is incredibly ambitious and each character gets their own space this time around to really shine. Amelia I felt in the previous film was a bit undercooked (you can read it here) In this film she is really given time to shine as the girl in between the two worlds, speaking the language of the aliens, communicating between the two worlds and trying desperately to find a diplomatic way to find peace. There is something so pure and mesmerising in Tranter’s performance, by comparison Ewing has the strong man muscle lead that leans into a stereotypical lead, fortunately Ewing brings the most out of this character and his rapport with Steve builds, the eye roll inducing dialogue from the early minutes of the film fade away. Morrison is similarly placed as a over protective father just wanting to keep out of the mess and survive. Morrison is becoming a staple in Aussie films and the more screen time and seeing him go up against Vince Colosimo is one of the highlights of the film.

Visually this film is miles above anything that Australia has produced before. We quite often see a lot of picturesque Australian country films with beaches, country and sweeping plains. It was refreshing to see capital cities in a state of disarray with explosions, guns, lasers and a massive apocalypse raging across the country. This is no easy feat and while this film did have a modest budget for an Aussie film, it definitely looks Hollywood blockbuster style which will surprise and delight audiences. The real work of combining the Australian landscape with an alien world has been rendered beautifully (on a $25 million budget!) and can definitely hold its own against Hollywood counterparts.

To get the international audiences in Kim Jeong makes an appearance later in the film and really is just let loose. His rapport with the Rainfall team and the hilarious alien comes at a perfect point in the film to keep you interested in the story while a barrage of action scenes assault your senses.

While all of this sounds like a big Hollywood blockbuster, it has that vibe with a definite Australian flavour that permeates throughout the film. There is so much ground work here for more films to be made in this universe and while the budget is modest, there is enough substance in the story and characters to to warrant it all, this is something that these kinds of movies often lack. Fortunately for us director Luke Sparke really knows his way around both of these elements and steers the ship in the right direction.

The design of the costumes and look of the Aliens is something that definitely needs to be addressed. Particularly during the Sydney scenes there is this blue/yellow tinged light that really makes the aliens design stand out and shifting from underground to aerial shots effective. There is also a great scene in which Matt and Gary travel across the country on an alien creature that truly looks spectacular.

Occupation Rainfall far exceeded my expectations from the first film. While I did enjoy the first one, this follow up steps up the stakes significantly and kept me on the edge of my seat from start to finish. While there is some questionable dialogue at the start of the film, each character gets their chance to really shine this time around by utilising multiple locations and missions that play to the strengths of the lore. The visuals are truly spectacular and watching this in a Dolby Atmos cinema really immersed me in the world. Occupational Rainfall is an achievement in Australian blockbuster filmmaking and cements Sparke’s career as Australia’s next big filmmaker.

Occupation Rainfall is in cinemas now.