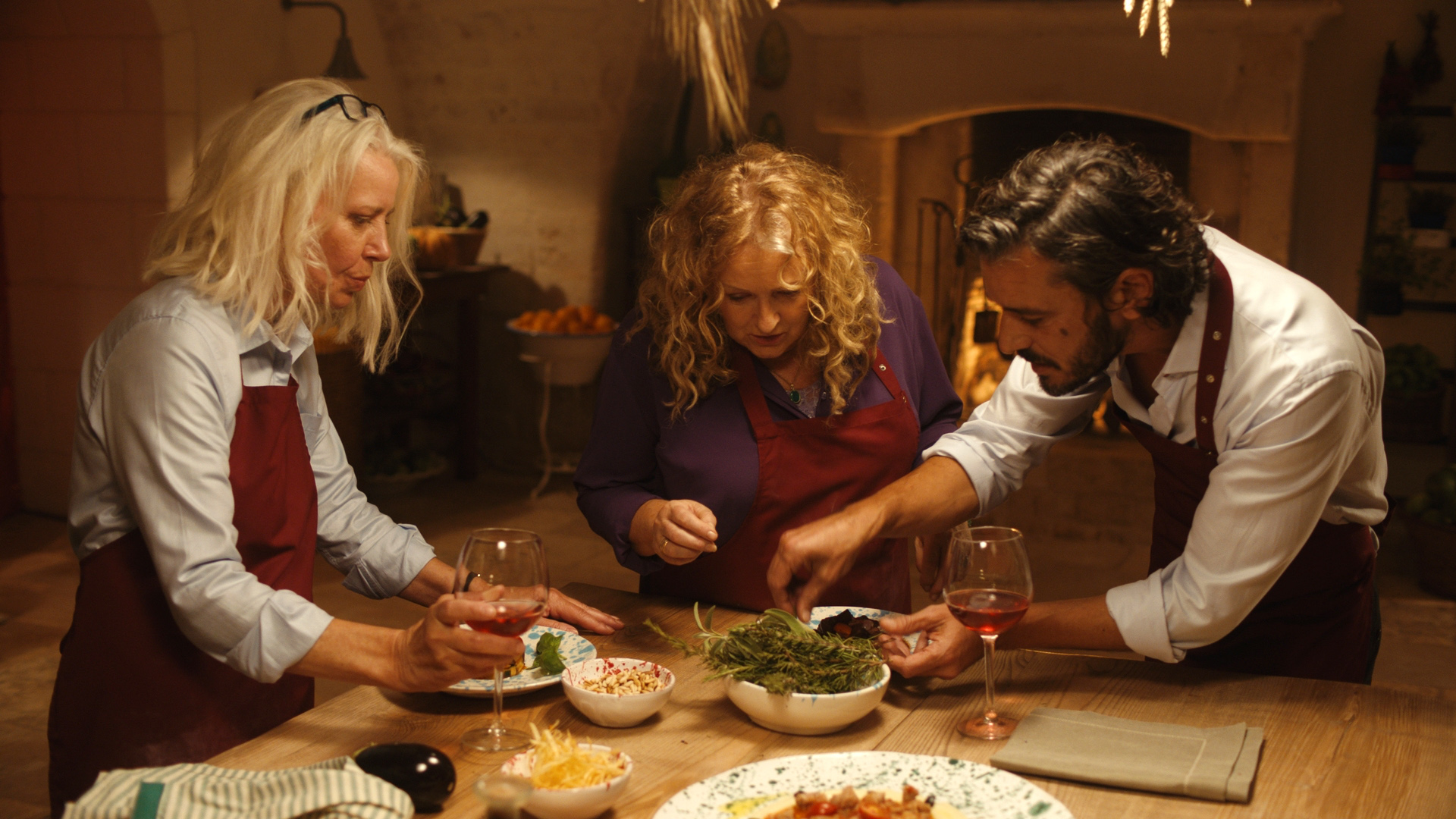 A Danish film that has a contemporary take on Eat, Pray, Love with 3 leading ladies fed up with their marriages, families and struggling with their transition into their 50’s, they take off on a trip to Italy for a cooking holiday. The movie is lead by three charismatic women who leave the cold and dark Denmark to the colour and vibe of southern Italy where they learn how to cook, eat and bond together ready to take on the next phase of their life.

The film revolves around Marie (Kristen Olesen) having dinner with her family on Christmas Eve, she is given a couples holiday for her husband (Peter Hesse Overgaard). When she discovers that he is cheating on her with a “garden gnome” (it will make more sense when you see it!) she turns to her two best friends Vanja (Kirsten Lehfeldt) a grieving widow who is obsessed with her dog and Samantha Jones-esque desperately clinging to her youth and sexual desires Berling (Stina Ekblad). The five days that the three women spend learning how to cook and eat are set each morning by the menu.

The three women learn to cook by taste and feel as opposed to set recipes and this flows over into their lives. Marie is trying her hardest to get her husband to come back to her, convincing herself that it is just a phase and is assured by her friends that this is true. The more that she cooks and learns about herself, the more she accepts that her life of cooking, cleaning, raising their kids and running her husbands business has void her of knowing herself. It is this process and realisation that sets off a chain of events for Vanja and Berling. Vanja learns that she must let go of her husband and move on from his long departed death and after flirting with another guest Jacob (Troels Lyby) is ready for love and a second Mr. Right in her life. Berling learns to accept that just because she is reaching her next phase of life, her love and vitality doesn’t have to go with it. It is a great message that is told expertly by the vivacious three leads.

Director Barbara Topsoe-Rothonborg is in full control of this film as the camera whips around the dinner table each meal looking more colourful and sumptuous than the rest. Honing in on the relationship between the three friends and how their bond effects the world around them and their families envelopes the audience in this world. The film is subtitled and the story and world is so well told that you completely forget you are reading subtitles. The performances and food pull you into the world that much can be understood from non verbal cues. This is the sign of a true master filmmaker.

The setting of Southern Italy and the large farm and small town that serves as the setting is incredibly picturesque. This is increasingly evident after the stark contrast from the start of the film set in a cold harsh winter of Denmark. Filming food is never an easy feat and while it is not in the same realm of the groundbreaking Hundred Foot Journey or Eay Pray Love, it does have its own distinct style that realises that food is an important part of the story but will focus more on the human characters and their relationship to it.

The Food Club understands its audience and what they want to see. It takes three very different characters and throws them into a unique setting to allow them to move into the next chapter of their lives. While we have seen this many times before, this take on it has added depth due to the incredible performances from all three lead characters and the camera that is intent on making everything look incredibly beautiful.

The Food Club is in cinemas from the 4th of February with a special preview screening on the 27th of January.=