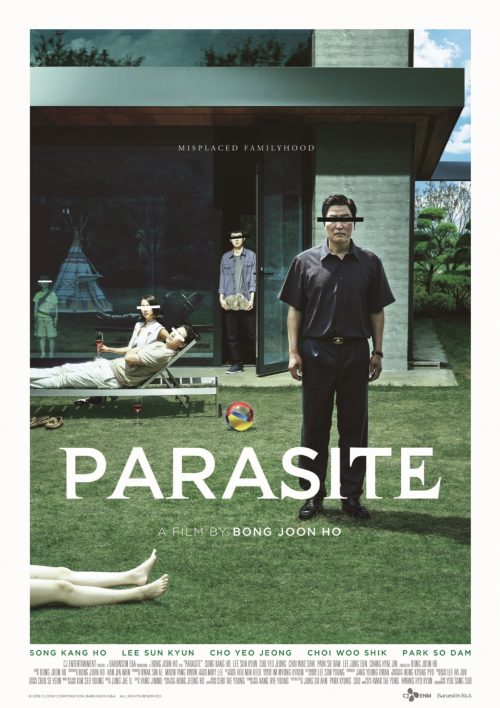 After winning the Palme d’Or in Cannes, the French Oscars let’s say, Sydney Film Festival was quick to reel in that line and get Parasite to screen at multiple sold out venues around the city. At the end of the festival, the film got awarded the biggest price (Best Film) and distributor Madman Entertainment decided to ride that wave of interest in the film, releasing this Korean dark comedic masterpiece just a week later in Australian cinemas.

Ki-woo (Choi Woo-sick) is a young man with not much to look forward to. He basically lives in a basement apartment with his scruffy dad Ki-taek (Song Kang-ho), snappy mother Chung-sook (Hyae Jin Chang) and his clever sister Ki-jung (Park So-dam). Their tiny confined home feels too small to live in with four adults. They use free wi-fi from their neighbours and try to make some easy money by folding boxes for a pizza delivery company, until Ki-woo’s friend offers him to take over a student to tutor.

Faking a university diploma and a shameless backstory, Ki-woo introduces himself to a rich family in a dream house with the most well maintained lawn you’ve ever seen. Here he becomes the tutor to Da-hye (Ziso Jung), daughter of wealthy CEO Mr. Park (Lee Sun-kyun) and his emotionally unstable wife Yeon-kyo (Jo Yeo-jeong). Everything seems to go just as planned, until the almost perfectly executed plan starts to unravel more and more out of control.

Scriptwriters Bong Joon-ho (who also directed) and Han Jin-won have so many twists up their sleeves to make this the most entertaining and well-written film you’ll see this year. Every line gets delivered so smoothly, as if it seems like these characters are real people who are living through this story, with Jung Jae-il’s classical score, masterfully playing in the background. The cinematography by Hong Kyung-pyo differentiates itself from a more realistic gritty style in the basement apartment, to a more dreamlike perfectly slick style when focusing on our wealthy characters. This point of view makes us look at these two very contrasting groups of people in a different way, to make it even clearer that they don’t belong in the same world. Class systems have never looked more down to earth yet perfect before.

Though Bong wants you to feel for both parties, the lines will blur at certain points and make your sympathy for anyone bounce back and forth with feverish consequences. Everyone has a sense of selfishness to them when it comes to goals, but being nice doesn’t take that much effort. The film focuses on poverty, desperation and what we are willing to do to take what should be ours. Tension between upperclass elegance and underground threat has never been more in your face. Bong (Okja) always loves to blur the lines of genre and he makes sure he hits every step on the staircase, to succeed in his efforts.

Parasite is a mite that doesn’t discriminate and will get under every moviegoer’s skin, no matter what background you come from. The power of this story, is found in the way comedy and drama rub each other in just the right way to spark a bit of thriller, that flips over into pure horror when despair and hate meet each other. This is one infestation you can’t get rid off.