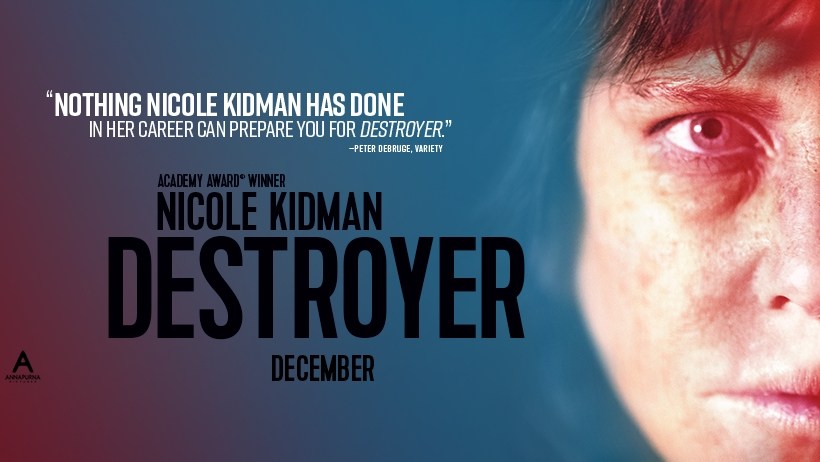 There’s this hard line between an amazing performance and a terrible film that makes it hard to know if it was any good or not. Sometimes you’ll get a film where one actor outshines the rest but it still works. Other times the film carries the poor performance. What you have in the case of Destroyer is a mostly tremendous performance from Nicole Kidman, but a rather boring and draining storyline to get you to a questionable finale twist.

Erin Bell (Nicole Kidman) joins a gang as an undercover cop. When a heist goes wrong and her life is turned upside down Bell lets the guilt, regret and anger fester. But when the leader of the gang returns, Bell becomes obsessed to finally get herself the closure she needed.

The film flips between a younger version of Kidman as she enters the gang giving context to her current state of mind and reason or relationship to her current actions. It also adds a great deal of depth to the transformation Bell has grown to be.

Nicole Kidman (Aquaman, Lion, The Interpreter) gives one of her most complex character performances. For the most part it’s helped by her transformation to look at least 10 years older than her actual age due to alcohol and drug abuse. While there is an extensive backstory to Kidman’s character it’s almost as if the performance was too well thought out for the rest of the film.

The film didn’t manage to capture the depth or interest of what it was trying to do. On the basic level, it’s an extended version of a Law and Order TV episode. Its merits lie in the story telling between the past and present. However, it doesn’t provide enough understanding or give enough to form any relationships to the characters or story.

Destroyer comes from Director Karyn Kusama who has brought us Æon Flux and the assassin Charlize Theron. Kusama tries to give this female lead power in a situation where she doesn’t have any. The strong desire to put a vulnerable yet independent woman into situations where she needs to use her femininity to her advantage doesn’t quite work in this case.

Overall, Destroyer has all this potential to be a clever and well executed artistic film. But in the end, it isn’t well thought out or considered when putting it all together. The storyline doesn’t match the performances. The cinematography doesn’t match the story line. And because nothing quite fits in with each other it becomes a rather boring episode of Law and Order that’s on in the background as you make your dinner. Not quite worthy of your attention.