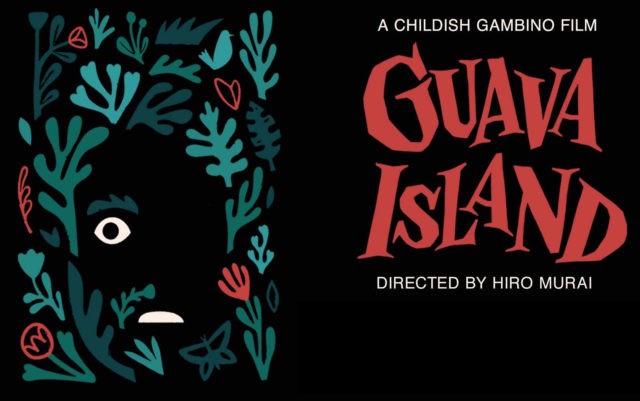 Glover gave unto his fans demands and in the footsteps of Beyoncé and her visual album of Lemonade, compiled a short film with a number of his songs entitled Guava Island. Of recent times Glover has used his art to share his views and thoughts on the society he is part of. Gambino’s 2018 hit This is America is one of those expressions full of symbolism and ideas throughout the song. Guava Island follows a similar idea.

While Guava Island is only a short 55 minute film Glover teams up with Director and long-time collaborator Hiro Murai (Atlanta, Barry, Childish Gambino : This is America). Together with the written help of Gambino’s brother Stephen, they tell the story of Deni Maroon and his quest to liberate the oppressed folk of Guava Island.

Guava Island starts with a beautiful animation showing the story of how the island came to be where it is today. With the voice over by none other than Rihanna herself who plays Kofi Novia, Deni’s pregnant girlfriend. The story explains how the Island was created free of greed and war only for it to become industrialised and the locals oppressed.

Deni is a musician who is about to host a music festival for the locals to liberate them even if just for a day. That is until his boss, Red Cargo, out of fear of his production lines to export the most beautiful blue silk known to man might come under threat, he demands Deni to cancel the festival.

Kofi gets wind of the request and fears for Deni as she knows how forceful Red can be. And while the people of Guava Island enjoyed the music festival Red took matters into his own hands and ended the festival and the life of Deni.

In a show of solidarity, everyone refused to go to the factory and instead marched through the streets singing and dancing in celebration of Deni’s life. Kofi devastated by Deni’s death takes refuge in the fact Deni did something far greater than his life and gave the folk of Guava Island hope once more. A greater future for their unborn child.

The setting for Guava Island is the beautiful Cuba. Streets filled with Havana architecture and colour, beautiful beaches and plenty of sunshine plays backdrop to the Guava Island story and music from Gambino. Feels Like Summer, Summer Magic and This is America are just some of the well-known songs you’ll expect to hear. This is America is intertwined into the actual story itself giving further life to the dance from the video of the hit song.

Glover gives a great performance as has come to be expected from almost anything he touches. It feels like a culmination of a number of his characters over time. There’s some Troy Barnes from Community, Andre from Magic Mike, Rich Purnell from The Martian and a touch of Earnest ‘Earn’ Marks from Atlanta. Glover brings a childish innocence yet street smart character to life where you just want to be his friend.

Rihanna who plays his Glover’s partner Kofi Novia captures something sweet, cautious but full of love. While she has a whole lotta sass, Rihanna shows a much softer and intimate character of which isn’t usually seen in her characters. Her chemistry with Glover on screen is heart-warming and full of love. Rihanna really took ownership of this role and gave it something unexpected from her usual roles.

If you’re a lover of Childish Gambino’s music, acting or how he uses his art to express his views and ideals, Guava Island is worth the watch. It’s a fun and entertaining short film that puts what feels like how he envisions his music into a story. The journey from when he gets the idea for a song and then the execution of the song itself.

The film was first shown to audiences of Coachella to coincide with his performance at the festival this year (2019). But for now, you can find it on Amazon Prime Video.