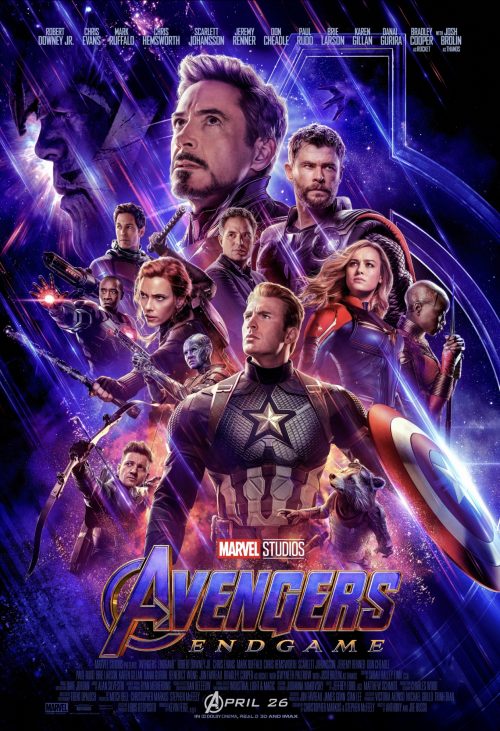 Thanos (Josh Brolin) snapped his fingers while wearing the Infinity Gauntlet, and half of all life in the universe disappeared. That’s how last year’s Avengers: Infinity War ended and left us craving for its epic conclusion.

One year later, we are finally in the Endgame. The Russo Brothers filmed this arc of the Marvel Cinematic Universe back to back and reminds us of the “snap”, as we sit down to witness what’s coming. Unaware of the battle happening in Wakanda, a family is in for a surprise that will have some serious consequences. Not just for them, but for the entire universe that doesn’t know how to move on.

The surviving Avengers – Thor (Chris Hemsworth), Hulk (Mark Ruffalo), Captain America (Chris Evans), Black Widow (Scarlett Johansson), War Machine (Don Cheadle) plus brand new members Rocket (Bradley Cooper), Okoye (Danai Gurira) and marvellous Captain Marvel (Brie Larson) set off on a mission to stop Thanos once and for all. Will they find Iron Man (Robert Downey Jr.) and Nebula (Karen Gillan) in time to join them on this quest? And if so, what if it all fails in the end and make things even worse?

11 years and 21 films have been leading up to this chapter. Avengers: Endgame says farewell to characters that have been part of our lives for such a long time, tears are inevitable. Emotions will peak, because movie fans have sat in the backseat for such a long time and got to know these heroes as if we’re part of the team. Plots will be wrapped up (even some continuity errors are being corrected, to make sure everything is correct). Everything is at stake and there is only one solution. This is it.

Christopher Markus and Stephen McFeely‘s script knows just how to find that balance between science, drama and action. These guys know what they’re doing and find the heart in the midst of all the heroism. The battle of Wakanda was just a warm up – you ain’t seen nothing yet! The Avengers and all of their friends get enough screentime to be remembered with honour or to leave an everlasting mark on all of us. Our superheroes have some extra tricks up their sleeves to keep things exciting. Every one of them gets a moment to shine and the clash we witness in the third act of Endgame is one of the most perfectly constructed and visually mesmerising war scenes you will witness – maybe, EVER! There will be laughs, you will cheer and gasp and you will definitely cry.

After Endgame, there’s a whole new saga to start and an entire universe to explore. But for now, let’s just enjoy the finale to our Infinity Saga and take one last bow to salute them. Thank you Avengers. We love you 3000!

Avengers: Endgame is playing in cinemas all across Australia