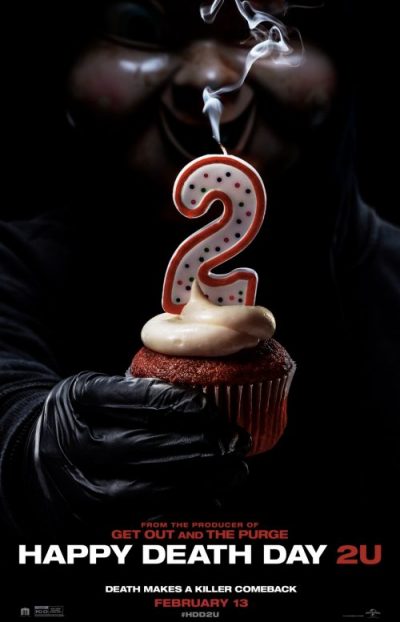 Coming from someone who thought Happy Death Day was just okay – this sequel really worked for me.

Tree Gelbman (Jessica Rothe) has a new chance at life after the events of the first film. She’s now dating cutiepie Carter (Israel Broussard) and she killed of her killer roomie Lori (Ruby Modine) who was hiding behind the babykiller-mask.. until she wakes up on her birthday all over again. Ryan’s (Phi Vu) science project explodes and now dimensions get mixed up and everything is not what it seems.

Christopher Landon‘s sequel is crazier and shakes things up in the timeloop without boring us. Characters from the first film are back and thus we dig a little bit deeper in who they are – although some of their personalities are a little bit different than before. Jessica Rothe is a sight to behold and the driving force in this story. After finding out she has to go through all of it once more, it’s her frustration coated aggression dipped in confidence that makes us cheer for her more than before. She’s a mourning daughter trying to get over the loss of her mother and moving on to a new life. But this seems to be a harder task than overcoming the fact that a killer is following her every move. Her energy is what makes Tree Gelbman a 21st century screamqueen.

Rachel Matthews as Bee Danielle – our queen Bee – steals the spotlight in every scene she’s in. Who knew she’d be able to pull off physical comedy this well? Some audience members were almost rolling on the ground laughing. Ryan, Dre (Sarah Yarkin) and Samar (Suraj Sharma) meanwhile try to find the right formula to clean up the mess they made. There are some characters from the previous film that are more important this time around. And they are here to show everyone they’re not just one-trick-ponies.

Landon’s Happy Death Day 2U is taking a different turn from his 2017 slasher that joined forces with comedy. He and co-writer Scott Lobdell step away from horror even more and go full-on sci-fi. Even the death scenes (incl. inventive suicides to get back to the start faster) are made to laugh at. Some of the teen-drama is where the tone of the film stumbles. Those who are looking for a light slasher horror flick, might come home from a cold shower. But if you’ve seen the first one and embraced its premise and craziness – this one is right up your alley. Happy Death Day 2U made me feel more alive than its predecessor. Who knew that less “death” could make me more “happy”?