Review - If Beale Street Could Talk 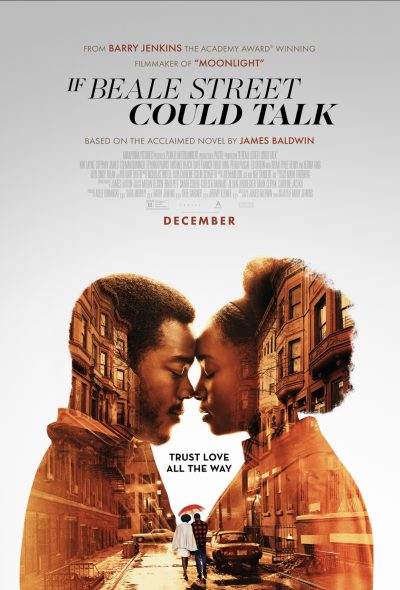 Kiki Layne plays Tish, a 19 year old living in Harlem in the early ’70s. She’s madly in love with boyfriend Fonny (Stephan James), a 22 year old artist she has known since her childhood. They’re excited to get married until he is arrested, charged with raping a Puerto Rican woman. Everyone knows he didn’t do it. While Fonny’s behind bars, Tish finds out she’s pregnant.

If Beale Street Could Talk shares a common theme with his former Oscar winning picture Moonlight – love. The challenges African-Americans face in a country where they often don’t feel welcome. Barry Jenkins‘ films always show how a simple emotional connection can heal all wounds. Feeling useless, lonely or miserable just fades away with a touch or by looking into that special someone’s eyes. Beale Street tells their story with flashbacks, while we see Tish struggle to prove Fonny’s innocence.

Stephan James’ gentleness and pride compliment Kiki Layne’s euphoria on first love. They never fail to make their joy and pain luminous onscreen, even if it’s all a little too idealized. Bryan Tyree Henry only has a small part playing Fonny’s close friend, but sure leaves his mark on this film. Regina King is phenomenal playing Tish’s mother, and deservedly got nominated as best supporting actress by the Academy.

Jenkins’ style is unique. The way everything is edited and shot – close ups of faces in love, black and white pictures of real life arrests – it all completes his exploration of romance and vision on African-American life, family and racism. These different narrative elements may be overwhelming to some, but if you just let it flow through you and enjoy what’s on screen it can be something truly remarkable.

Cinematographer James Laxton shows us a dreamlike Harlem anno early 1970, as if it’s an extend of the character’s feelings. Nicholas Britell‘s score stimulates a range of moods, especially when accentuating the blissful moments between Tish and Fonny.

The story is partially legal drama, love story and family saga. It’s about people learning to accept how to live in difficult circumstances.

The writer-director might not achieve something as seamless as Moonlight, but the adaptation of James Baldwin‘s novel still proves to be a riveting, entrancing experience.