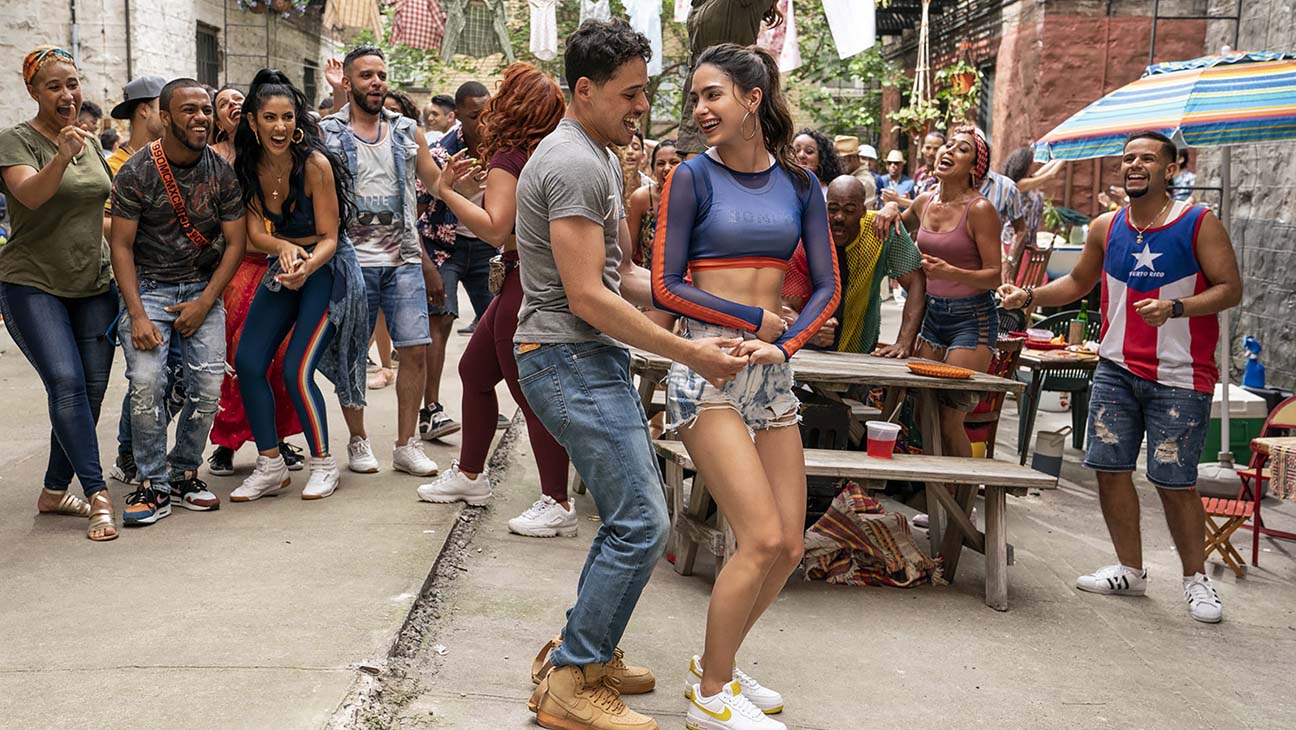 Everyone has a dream, un sueno and Lin-Manuel Miranda has taken his own dream – his first Broadway musical In the Heights and brought it to the big screen – splashing colour, some beautiful special effects, superbly choreographed routines, and, of course, songs and glorious music. Working together with director Jon M. Chu (Crazy Rich Asians) and writer Quiara Alegria Hudes, the result is indeed a fiesta for the senses and the soul.

In the Heights is a snapshot of life in a corner of Washington Heights, a bustling, predominantly Latin American community where everyone has an immigrant story to tell and is chasing a dream.

The film begins with the brilliant titular opening number led by our chief protagonist Usnavi de la Vega performed endearingly by Anthony Ramos in his first lead role in a film. This opening sets the scene of life in Washington Heights, introducing the other main characters and their intertwined relationships and stories. Usnavi is the owner of the local bodega, the corner store and is dreaming of one day returning to his Dominican Republic homeland which were ‘the best days of his life.’ He is helped in the bodega by Sonny, Usnavi’s larrikin younger cousin, a lazy clown of a kid with boundless promise.

Then there is father and daughter Kevin (Jimmy Smits) and Nina Rosario (Leslie Grace). Kevin has worked hard to send Nina to Stanford to make a better future for herself. Nina is the one resident of Washington Heights who is going to be an example of someone who ‘makes it out of here’. Yet, Nina has returned home for the summer disillusioned and disturbed by her initial experience at college and doesn’t wish to return.

Nina’s former boyfriend Benny (Corey Hawkins) is elated to see Nina return and hopes to rekindle their romance for as long as she is home. Vanessa (played exceptionally by Melissa Barrera), Daniela (Daphne Rubin-Vega), Carla (Stephanie Beatriz) and Cuca (Dascha Polanco) all work at Daniela’s Beauty Salon across the road and are in the midst of moving out to another neighbourhood.

Fondly watching over these characters of the village and lovingly cared for in return is Abuela (grandmother) Claudia (a delightful Olga Merediz) who moved from Cuba with her mother as a child and worked as a cleaner. She is a gentle soul giving sage advice to her loved ones, emphasising the importance of taking pride in their cultural identity and maintaining one’s dignity at all times as these dreamers make their place in America. She has a special place in her heart for Usnavi who she has helped raise as a child.

These characters and their dreams and stories are gloriously told through songs which represent their individual personalities which give us a variety of musical styles ranging from hip hop to ballads and freestyle rap. It brings an extra dimension to the film which rapidly enhances our connection to each character to a surprisingly intimate level.

The neighbourhood is going through one of the hottest summers on record which results in a blackout lasting days, and the neighbourhood bands together to endure its impact together. We travel through the highs and lows of our protagonists’ lives brought to life through songs with clever lyrics and Latin flare. It really is an amazing feat to feel each character’s joy and longing with such a large ensemble cast. It highlights the genius of the musical genre which does not have to rely on clever scripting to develop its characters and instead uses creative lyrics to provide emotion and engagement to draw the audience in.

Miranda has stayed true to form in transporting us into his world of musical genius. There are no less than seventeen songs performed, with the first act barely having spoken dialogue in between. For those viewers not accustomed to musicals, it can be an experience that may require some perseverance. The intervals between songs do become longer and more frequent in the second act and, despite the engagement of the songs, they are welcomed as the plot arcs and we are invested in the characters’ journeys. The brilliant lyrics are truly a testament to Manuel’s incredible songwriting flair.

There are some notable highlights in the musical numbers. The title song, “In the Heights” performed by the ensemble cast is superb with a medley of vocal and musical styles, with Usnavi’s rap the underlying theme to explain backstories as each character is introduced. It provides the perfect introduction in seven and half minutes which any ordinary film would spend half an hour trying to do, and even then, often leaving viewers unsatisfied.

The final song, “When the Sun Goes Down,” features Nina and Benny singing a sweet duet imagining their summer romance was a forever event. As they become lost in one another’s presence, they begin dancing on the side of an apartment block, the world seemingly turning on their cue. It’s a glorious routine akin to a Fred Astaire and Ginger Rogers moment or something Gene Kelly would have cooked up.

Another wonderful musical moment is “96,000,” which again brings in the entire ensemble and indeed the village, singing out their dreams in a wonderfully choreographed display centred at the local swimming pool. There are some lovely animations which dance across the live scenes which come across as cute embellishments while dance routines include a nostalgic number in the pool itself, reminiscent of the films of Esther Williams in the 1940s and 50s

Indeed the film channels inspiration from a number of Hollywood musicals of yesteryear as well as recent successes like La La Land in its use of colour, animation, and choreography and yet Manuel’s product is entirely his own. It doesn’t always work though. As wonderful as all the main characters are in their own right, some of the relationships don’t seem to gel – most notably the lack of chemistry between Nina and Benny. And despite the number of wonderful songs and routines packed into it, the film’s 143-minute running time does tend to feel stretched in certain scenes. But these are minor quibbles that seem lost amongst all that is joyous.

It’s certainly worth a trip to the theatre to view this film in its bright and colourful best. When all is said and done, In the Heights is a spectacle that lifts the spirits and brings out the fiesta feels in all of us.

In the Heights is released in theatres on June 24

Like Loading...
Newsletter Signup
In this article:2021, Anthony ramos, in the heights movie review, Jon m chu, lin manuel miranda, movie
Up Next: