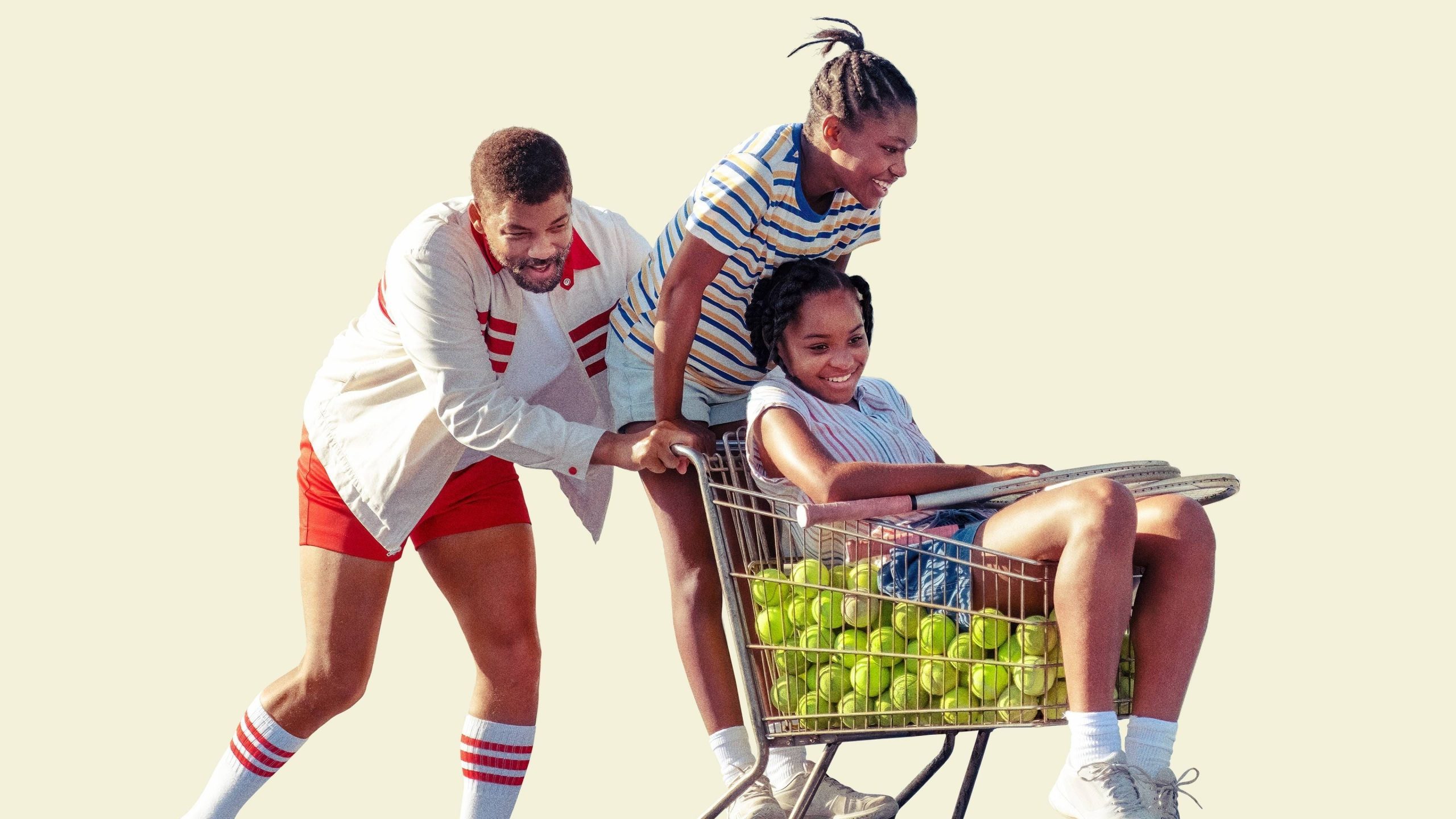 Awards season is in full swing, and no category is filling up as quick with potential nominations like Best Actor is. In the dramatic biopic, King Richard, Will Smith gives a fully immersive portrayal of Richard Williams. Richard is the father-coach (or at some points, coach then father) of the powerful and dynamic Queens of the tennis court, Venus and Serena Williams (played by Saniyya Sidney [Venus] and Demi Singleton [Serena]). Based on their true life story, King Richard doesn’t stray far from the familiar conventions of a sport-drama, but solid direction and outstanding performances in a story full of hope make this film one of the year’s best.

Compton, California in the early 1990s, Richard Williams alongside his wife, Brandy (Aunjanue Ellis), is raising his two daughters and three stepdaughters. Dedicated to being an enforcing presence in all the girls lives in order to fulfill his self-proclaimed promise to keep his children off the streets, Richard subscribes to a military style routine for the family. While education in high-class fields is at the forefront for his stepdaughters, it’s sport – specifically tennis – that has Richard being the full-time tennis coach for Venus and Serena. Vigorously training them both in the sport, both physically and mentally, in order to pitch them as prospects for future champions, Richard faces his truest internal battle when Venus gets the chance to train under a world class coach whose ideals clash with that of King Richard’s.

At its core, King Richard follows a lot of the story beats that are familiar with the underdog-sports-drama. Establishing early on that the Williams’ family together is full of tenacity, drive and passion, it quickly fills the audience with hope that Venus and Serena will reach their goals (and to an extent, Richard’s desire too) to be world champions. It’s when we watch the Williams’ sisters training travel in an old VW combi-van (with more space taken up by ancient training equipment than people), to a raggedy tennis court that doubles as a hang out for the local gangsters who harass Richard and his daughters at any chance, that it’s obvious becoming world tennis champions is going to be a steep, uphill battle. It wouldn’t have been easy having to learn to be professionals with equipment that was used 10 years earlier, let alone being two Black-American teenagers trying to make their name in a sport played predominately by caucasians. Richard understands the road ahead for Venus and Serena will not be easy, and he has trained them to also understand that, so much to the point that their sheer ferocity on and off the court is nothing but awe-inspiring.

Director Reinaldo Marcus Green (Monsters and Men) balances the two strongest aspects needed to make King Richard the outstanding sports-biopic that it is. Being such a personal and intimate story, his pacing really allows the audience to be fully connected to the Williams’ family. Even when ideals clash and heads get heated, Green’s focus on the reason’s of why each character is pursuing their dream in their own way creates an engaging, heartfelt and human story to watch. And while that intimacy with each of the main characters emotions really work on the heartstrings, it’s the coaches who aren’t Richard that act as the audience and question the morality of Richard’s eccentric styles when needed. The first coach to take on the Williams’ sisters is Paul Cohen (Tony Goldwyn), who’s a tennis legend in his own right, coaching the likes of John McEnroe and Pete Sampras. Goldwyn is brilliant as the stoic Cohen, who is an authentic coach who genuinely wants Venus and Serena to succeed, but understands it may come at the price of going against everything they’ve learnt from Richard. The relationship between Cohen and Richard is built on respect, which makes their emotional back and forth truly engaging to watch. Their second coach, Rick Macci (Jon Bernthal), has more of an eccentric style, but equally sees the potential in both sisters. Hosting them at a state-of-the-art tennis coaching facility, the realisation soon comes that the scales have tipped the other way, and trying to regain that balance for training styles becomes Richard’s problem. Bernthal truly chews up the scenery in a charismatic and entertaining performance, a highlight of the supporting cast for sure.

Green’s other ability is to capture the fierceness of tennis on the court is exciting. Feeling the strike of every tennis ball, every exerted grunt as Venus and Serena give all they have to this sport builds up to a fantastic finale that exudes the tension that the third act sporting event needs in a film like this.

Sidney and Singleton as Venus and Serena respectively, truly shine in their roles. Capturing the true essence of the Williams’ sisters as seen through their careers by being both joyful and sweet, and simultaneously being fierce and powerful. It’s impossible not to back these incredible athletes throughout their journey. Aunjanue Ellis is a tour de force as the step-mother who conflicts internally (and later on in the film, outwardly towards Richard) with being a mother and a co-coach, and how far should the be pushing these girls. It’s an emotionally driven, empathetic performances that is the anchoring heart of this story.

But it’s no surprise that the scene-stealer is Will Smith, who already is and deservedly so being talked about for Oscar contention. Smith transforms himself physically through a gait that is uncannily familiar to the real Richard, and has a spot on vocal impersonation too. But, it’s the heartfelt performance that only a father and an actor could give. Richard is a man who truly believes in his mission to make sure his children have it significantly better than he did when he was young. Watching Smith in this role, even though he is at many points so immersive he’s unrecognizable, seemingly pulls so much from his own paternal experiences to give a strong, emotionally gripping lead performance.

Even at 2 hours and 20 minutes, every single second of this film is captivating due to its amazing portrayal of the true events. Even though you know the Williams’ sisters end up being the most successful tennis players ever (both on the court and financially), director Green still manages to engross the audience into their lives and create the doubt and tension that comes with the rocky journey to overcoming all odds. And while the story is engaging, it’s the work of the supporting cast, anchored by an award winning comeback performance from Smith that makes King Richard one of the unmissable, heart-warming movies that must not be missed.

Thank you to Universal Pictures Australia for the early look at King Richard – in Australian cinemas January 13 and on HBOMax now. Read Nick’s interview with Will Smith, Venus and Serena Williams, plus the cast and crew of King Richard here!