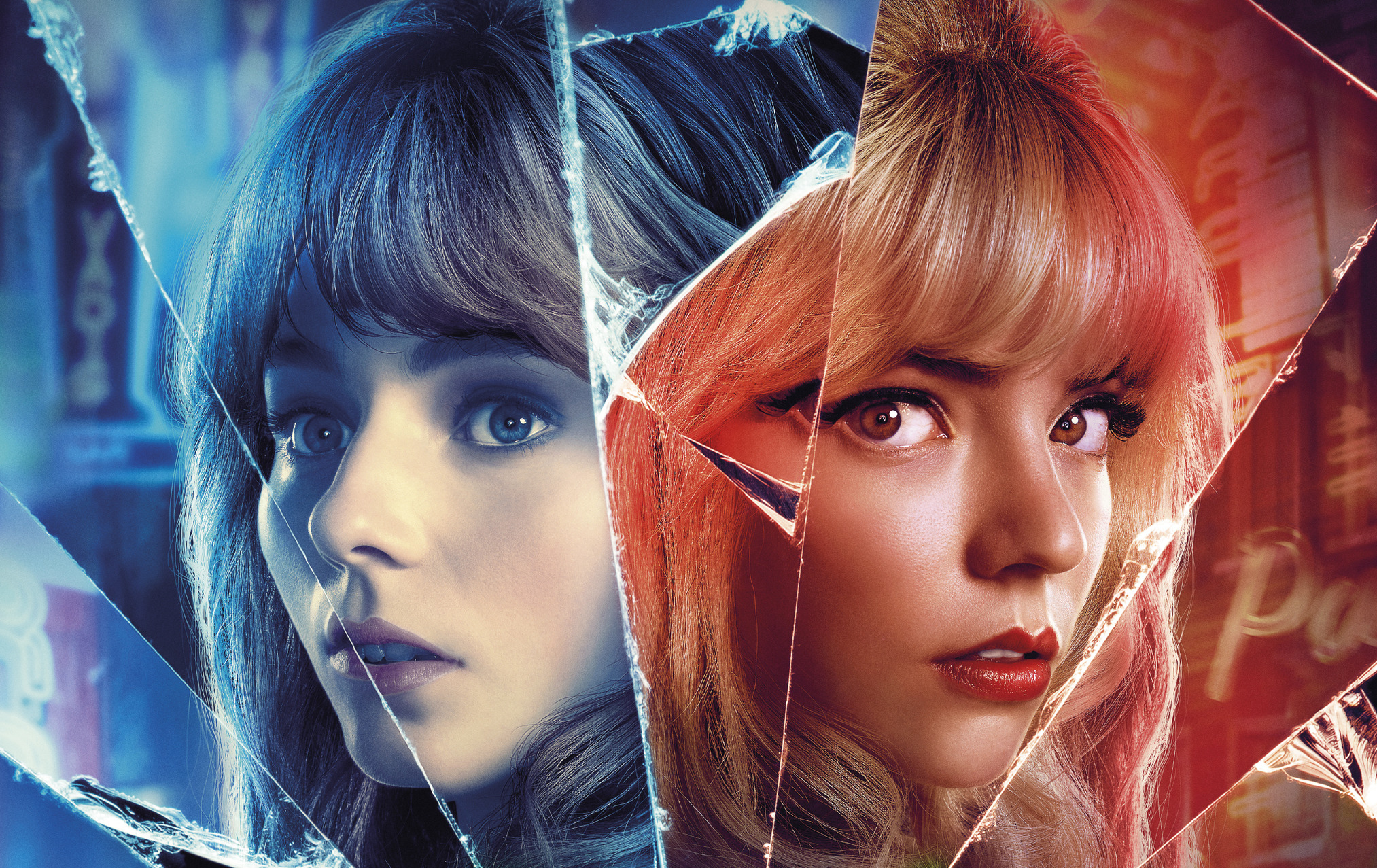 I will confess… I wasn’t the biggest fan of Edgar Wright’s 2017 film, Baby Driver. In fact, I walked out of that movie quite disappointed. After the slew of success with the entertainingly brutal and bloody Cornetto Trilogy and the hilarious, video-game-esque Scott Pilgrim vs. The World, it felt wrong that Baby Driver was such a misfire in my mind. I just couldn’t understand how a movie by Wright could be so stylistic yet so incredibly average story-wise. However, I wouldn’t let one movie out of Wright’s filmography turn me away from his future work. When I initially heard that his new film, Last Night in Soho, would be more of a horror/thriller, I was certainly intrigued, but I couldn’t shake the feeling of ‘cautious optimism. I stayed away from all trailers and as much marketing material as possible (I would even close my eyes and plug my ears in the cinema when the trailer showed before other movies, looking like an insane person). I even stayed away from the reviews when it premiered at the Venice and Toronto Film Festivals. And boy, am I glad I did because Last Night in Soho is a strength-to-strength piece of cinema from the British filmmaker that feels like the movie event many cinemagoers have been longing for since the start of the pandemic.

Eloise (or Ellie, as she prefers to be called, played by Thomasin McKenzie, Jojo Rabbit) has been obsessed with all things pop culture-wise since the 1960s. Movies, music, and fashion are at the forefront of the dream life she wishes to live. Having to move from her small town of Cornwall to London to pursue her dream of becoming a fashion designer, Ellie rents a room from an elderly lady in Soho. Feeling an odd connection with the room she is staying in, during her first night’s sleep, Ellie is mysteriously transported to the 1960s, where she has visions of an upcoming yet troubled singer called Sandy (Anya Taylor Joy, The Queen’s Gambit). As her dreams become more lucid and sinister, Ellie unwillingly begins to merge her two worlds, fantasy, and reality.

It’s almost a standard for movies today, but the less you know about where the story of Last Night in Soho goes, the better your viewing experience will be. This is an engaging and intriguing story that goes in many unexpected directions. Still, the script was co-written by Wright and 1917 screenwriter Krysty Wilson-Cairns, which genuinely draws you into the film’s mystery and begs you to let the story unfold in front of you and enjoy your time at the cinema. The script uses visual and thematic horror elements to create an account that serves as a cautionary tale about obsession, with a side of genuinely sinister character motivations that bring a consistent feeling of tension throughout. There will undoubtedly be moments and aspects of the film that won’t work for everyone, especially in the third act. However, within the movie-logic and artistic liberties taken by Wright and Wilson-Cairns, the craziness of the finale is satisfying and enjoyable.

Edgar Wright has created a visually intoxicating film that will captivate your senses. A trance-like element within the cinematography with neon lights and mirrors (reflection being a prominent theme within the story) creates the dream-like feeling of the scenes set in 1960s Soho. Every shot is a magical painting, carefully constructed for its place within the story. The use of mirrors is phenomenal and adds a sophistication to the film, both technically and thematically. There wasn’t a moment during Last Night in Soho that I wasn’t enthralled by what I saw on screen. However, the film highlights a dance sequence that expertly and flawlessly transitions between our two lead characters (Ellie and Sandy) dancing with the same partner. This may well and truly be Wright’s most visually beautiful film to date, and that’s saying something considering his visual filmography leading up to this point in his career. It just must be seen to be believed!

In her first actual leading role, Thomasin McKenzie is outstanding as Ellie. Ellie is reserved and quiet, but she is also filled with a firm tenacity. When it is opened after a few hallucinatory encounters with Sandy, it really allows McKenzie to thrive in this performance. Anya Taylor Joy is stunning as Sandy. Encapsulating the seductiveness that was seemingly required of a singer in the 60s to succeed while also hiding her own ferocious tenacity behind the performer’s mask brought some incredibly thrilling moments during her character’s arc. And finally, Matt Smith (Doctor Who) pulls off the charm-filled manager who offers Sandy the world on a platter but undoubtedly has more sinister intentions, with ease, and allows his acting chops to fly with some genuinely intense moments later in the film.

Last Night in Soho is capped off with an outstanding soundtrack. Never shying away from his love of music and how it’s used in the film, Edgar Wright has orchestrated equal amounts of spine-tingling and upbeat nature with the music used in this movie. Whether it’s eerie musical notes or the song’s lyrics setting up the scene’s tone (and inclusive of a beautiful rendition of Petula Clark’s Downtown performed by Taylor Joy herself), the music is just as much an important character within the movie.

While its ending may divide some audiences, I believe that Wright has created yet another incredible film with Last Night in Soho. This movie diverts from his usual action-packed-comedic outings in turn for a genuinely thrilling, always visually stunning tale that is captivating both technically and thematically. Helmed with outstanding lead performances that will lure you into the trance-like dream of a story and not let you go until the movie is over, Last Night in Soho feels like the movie that we have been waiting to return to cinemas for.