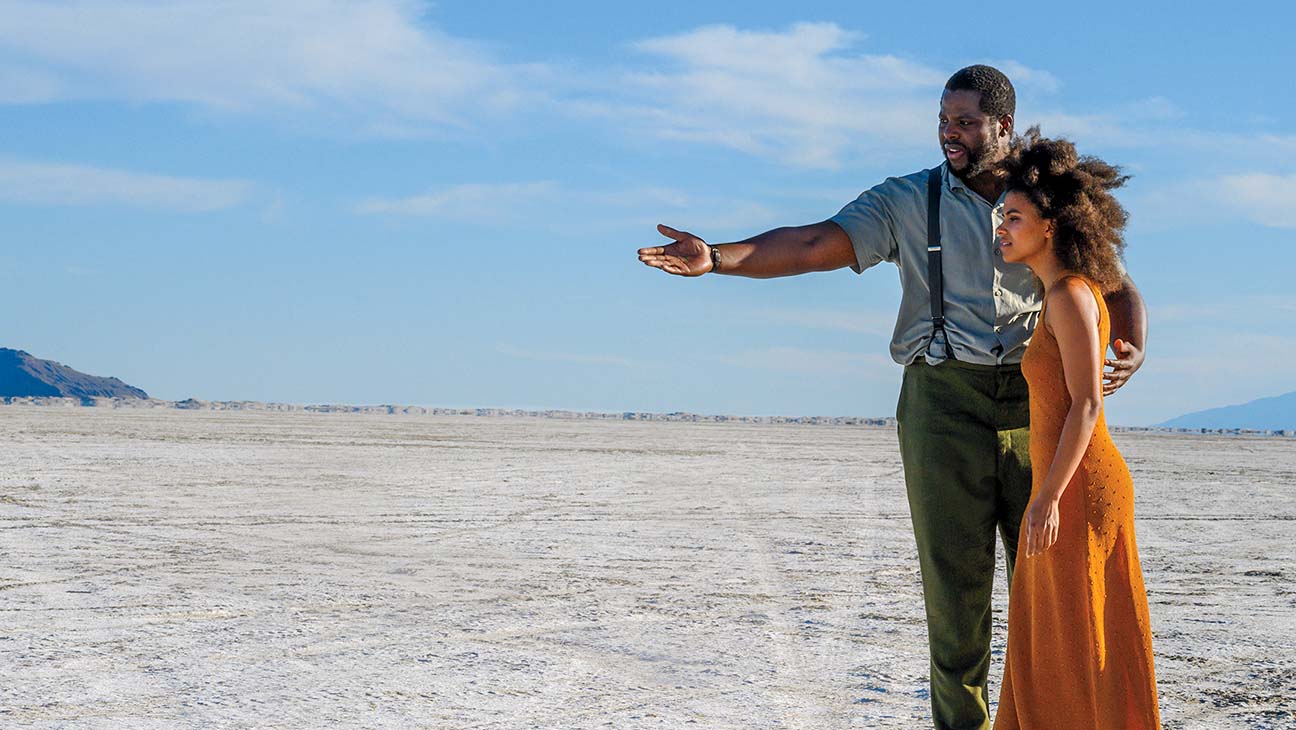 For many first-time feature filmmakers, making a first impression on the industry is paramount to success. Showing that you have a distinct voice with your story telling and a unique visual style can go such a long way to helping build the foundations needed to form a strong career to follow. Writer and director of Nine Days, Edson Oda, has done exactly this with his first feature film. Nine Days is a beautifully told and unique story that poignantly deals with philosophical ideologies regarding morals and existence, while also telling a heartbreaking story of guilt. This story, solidified with outstanding performances and phenomenally constructed visuals have made Nine Days one of the best movies to come out in 2021 so far.

Residing in an isolated home in a vast, desert plain, Will (Winston Duke, Us and Black Panther) observes and takes notes on the already born souls he has selected in the past by watching VHS taped footage of their lives through a point-of-view perspective. After taking special interest in a nervous concert violinist named Amanda, Will witnesses her tragically lose her life when she crashes her speeding car on the way to her concerto. Now with an extra spot for a new soul to fill, Will conducts a nine-day interview process for candidates who are the human embodiment of souls, for the chance to be born into the real world.

The less you know about Nine Days, the better a viewing experience to be had. Having only read a one-line summary, I was not prepared for the emotional journey that Oda’s story was about to take me on. Immediately, the first-person views montage of Amanda growing up, had me intrigued. It was from that point that Oda’s confident direction and incredible design of Will’s house that I knew I was about to view something incredibly special on a filmmaking front. The design of the TV’s that Will views his selected souls on is incredibly simple yet feels like it belongs in this ‘world’. And there are two separate scenes which share the same concept that blends the immense weight of the inevitability of life ending with the sheer beauty of the experiencing the little things that are mostly taken for granted in the world. These two scenes that Oda has created using outstanding practical effects, a powerfully emotional score and hard-hitting context of what is happening in these moments are the type of movie scenes that will undoubtedly define his filmmaking identity with overwhelming positivity.

Even when a film such as Nine Days deals with such heavy thematic elements in a well-told story and with a stunning visual aesthetic, the entirety of the films experience also must somewhat rely on the performances to also carry the emotionality. Winston Duke gives without a doubt his best and most subdued performance to date. Will is a character, like many of us, who is dealing with multiple issues at a time, and is using the guise of work to hide from an emotional guilt and pain (which is not entirely revealed to the audience until well into the movie). Having to be a guide for these lost souls, you see a stoic side of his character that acts as a cover for the real pain he has after losing Amanda. The arc of Will throughout Nine Days is fascinating and captivating to watch, and Duke has a performance to match.

The phenomenal supporting cast includes Benedict Wong (Doctor Strange) as Will’s friend Kyo who provides comedic relief that suits the films tone well and is unlike any performance I have seen from Wong before. Zazie Beets (Deadpool 2) is Emma, the soul who is focused on the most in Oda’s script, and she is a great juxtaposition to Will’s serious demeanor with her vibrant and curious personality. Emma questions everything, ultimately acting as the audience in this piece, trying to break down the tough exterior of Will to find out more about who he is and why he is here, but to also discover more about what life is really going to be like for the unborn souls. Other souls include performances by Tony Hale, Bill Skarsgard and Perry Smith who all have unique characters that allow this story to explore the many different aspects and morals of people in a way that feels genuine.

Nine Days is a fascinating look at so many different topics – life, death, values, morals, beauty, grief and letting go. Oda’s script focuses on a relatable character that allows the audience to fully sympathise with the pain he is going through, driven by a strong performance from Winston Duke. An intriguing premise that uses unique filmmaking styles to convey the beauty within the world and a concludes with a tear-jerking and heartwarming ending that will stick with you long after the movie has finished. I haven’t stopped thinking about this movie in the last 4 days since I have seen it, and for me, this is a perfect, 5 out of 5 film.