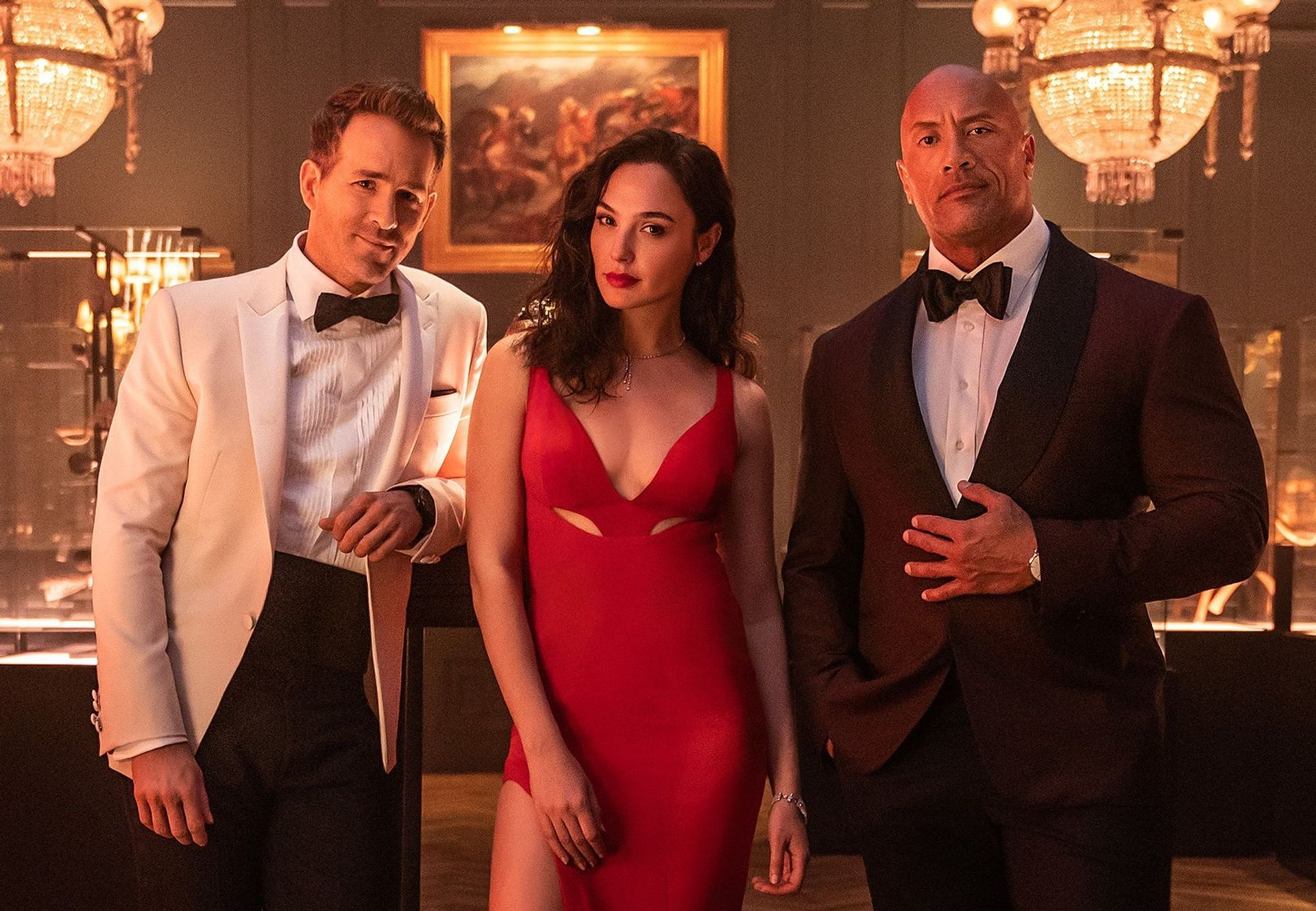 A fellow reviewer friend of mine said to me upon the release of the poster for Red Notice that it looks like the product of a computer-algorithm-created-masterpiece. You have a basic poster featuring three of the worlds biggest (and most attractive) Hollywood superstars, dressed to the nines in expensive suits, staring broodingly down the lens, right into our consumeristic souls. It’s a basic story about conmen and thieves, that takes the audience on a round-the-world journey to the most beautiful locations, as our stars flawlessly battle there way through the nameless bad guys without even putting a single hair out of place (apologies to Mr. Johnson for that analogy). Add that to the handful of The Rock’s Instagram posts and a couple of trailers from Netflix as an excuse for marketing, and you wouldn’t be remised to find out that Red Notice hit cinemas a full week before it’s streaming debut. This may sound a cynical way to start off this review, but in all honesty, I’m so glad I caught this movie in the cinema rather than on the big ‘N’, because it’s the first Netflix film in a while that has really captured a solid cinematic feel, harkening back to the action-thrillers of the late 90s and early 2000s.

Nolan Booth (Ryan Reynolds) is the worlds most wanted art thief, and his latest scheme involves stealing one of the priceless solid gold eggs owned by Cleopatra thousands of years ago. Hot on his tail, however, is FBI profiler John Hartley (Dwayne Johnson), who manages to confront his foe, but not long before being framed alongside Booth by the elusive con-artist, known only as The Bishop (Gal Gadot). Hartley and Booth must forge an unlikely, and unwanted, team to both get what they want, money and freedom.

Right from the opening moments of Red Notice, writer and director Rawson Marshall Thurber has captured a nostalgic adventure-film feel. The Italian based setting, with slick police cars speeding through the streets towards their target, all capped off when The Rock exits the car to a sweeping camera shot, tracking his face as he struts into the museum to stop Booth. The air of early 2000s action-thriller was caught immediately and straight away I knew what I was in for. This vibe is the in the film’s forefront for the entire 2-hour runtime. It’s homages and tones come from everywhere, whether it’s The Italian Job inspired car chases, or the Indiana Jones-esque escapes, or the Ocean’s Eleven style of cool – Red Notice is clearly trying to capture the best moments from those films into this one. It doesn’t always work, and it certainly doesn’t feel fresh or original, but the level of fun that is apparent on screen is noticeable and is captivating.

The freshest element of Thurber’s direction comes through incredibly well-handled drone shots that sweep through action set pieces in a way that hasn’t been done on film quite as well yet. Specifically, a museum chase scene involving Reynolds’ Nolan Booth, in which a drone camera follows him closely, weaving through falling obstacles that looked like practical, in camera effects. These shots were jaw droppingly good and added even more excitement to the film.

Going back to the “movie made in an algorithm” statement that opened this review, that argument is solidified by the performances of Reynolds, Johnson and Gadot. In fact, if the script hadn’t of given them character names and backstories, the film wouldn’t feel any different. Reynolds is firing out improvised banter like his life depends on it, and for the most part, his charm still won me over. There were less ‘laugh-out-loud’ moments, and more sly chuckles. Dwayne Johnson is charismatic as hell and there is no question about the physicality that mountain of muscle brings to the screen. Johnson playing an FBI profiler almost seemed like a joke within the movie, until he becomes just another action hero, beating up bad guys and going back and forth with Reynolds comedically, to the point where you forget he is even an FBI desk-jockey. And finally, Gal Gadot is having an absolute ball making this film. Her infectiously joyous smile is plastered across the screen through all of her scenes as she cons her way playfully through the film. It will come as no shock that the Wonder Woman actress also gets to show off more of her physicality in some excitingly choreographed fights and chases.

Red Notice is not a movie that is rich in story (in fact, it’s pulling most of it’s elements and twists from other movies it’s paying homage to), but it’s a truly entertaining ride filled with exciting action, corny comedy and a nostalgic feeling that will make you fondly remember the heist movies of the early 2000s.

Thank you to Dendy Cinemas for screening Red Notice for me. You can catch the film in Dendy Cinemas before it’s release on Netflix, just head to dendy.com.au for ticket details.