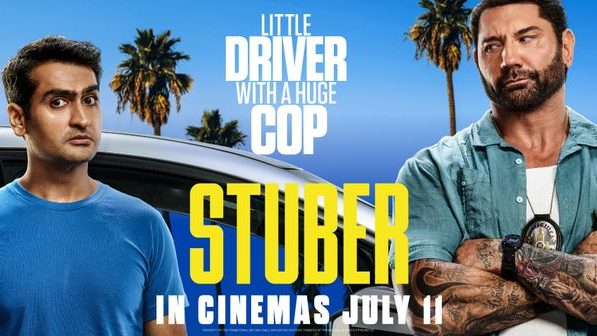 Once a year audiences around the world are treated to a cinematic experience like no other, Stuber. A journey into a world you would otherwise never experience. A tale from minds so adventurous you question how the writers came up with such tales. Right from the get-go, the trailer gives the audience a glimpse into what their cinema experience would be like. And that’s the exact point most people would stop and go no further. Stuber is quite simply, stupid.

Here is the thing about Stuber, it could actually be the most perfect film that falls into the category of a “switch off” film. From the unlikely on-screen duo, WWE superstar Dave Bautista and comedian Kumail Nanjiani. To the outrageous storyline and almost bizarre situations, Stuber makes no effort at trying to be anything other than stupid. But its stupidity is exactly the reason this film might just be what you’re after.

Sporting goods salesman Stu is earning a little extra cash on the side as an Uber driver. He’s saving to help pay for his investment into a spin gym. Police Officer on a staycation, Vic Manning has just had corrective eye surgery and on his way to attend his daughter’s art exhibition. Stu happens to accept Vic’s Uber request but rather than go to his daughter’s exhibition, he acts on a tip for a case he’s been working on.

Vic’s eyes haven’t healed and won’t for a few more hours. With no other means for getting to his tip-off, he convinces Stu to drive him around LA with the proviso he gets 5 stars. Going from clue to clue Stu and Vic start to build a bond as they get closer to cracking the case.

Let’s start with Dave Bautista (Guardians of the Galaxy, Hotel Artemis, Spectre). It’s fair to say Bautista can’t act. He can play dumb really well, but there’s no chance he is able to achieve much else. What he does do really well is fight and that’s exactly what he does, he gets beaten up and beats up.

Then there’s Kumail Nanjiani (Silicon Valley, The Big Sick, Men In Black: International) who plays the same character he’s played in almost every movie and TV show he’s ever worked on. But he plays it so well. His sharp, dry, nerdy and annoying humour is the polar opposite to his onscreen partner.

In all, you have a story where a partially blind Police Officer with muscles bigger than the squirmish and tiny Uber driver. Yet the two go to shoot outs and questionable places around LA in search for a bad guy. And somehow the two end up surviving to tell the tale. It doesn’t work. There’s no part of this film that works. The acting doesn’t work. The story doesn’t work. The fight scenes are more unbelievable than a WWE SmackDown. Yet because of those reasons, it’s actually watchable.

The comedy aspect of Stuber is dumb. But that’s the exact audience it’s targeting. People who just want to pop a film on and not have to think about it. The jokes are obvious and set up to make you giggle. The story isn’t hard to follow even when you’re Instagramming as it lost your attention.

If you don’t expect anything of this film, if you don’t want to have to think about what you’re watching and you don’t mind forgetting what you’ve just watched, Stuber is a perfect film to switch off to. And that’s all you’ll get. Nothing more, but a whole lot less.