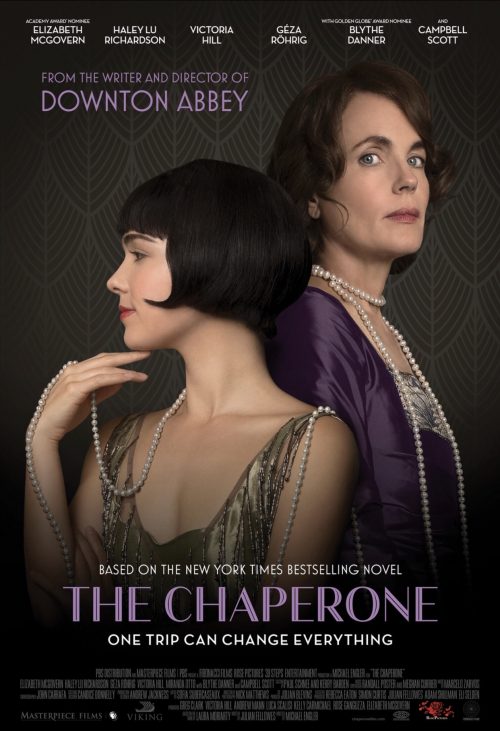 The Chaperone definitely didn’t feel as roaring as they say about the 1920s, so it’s safe to say you don’t need to bring one yourself.

The film has its pleasures, but nothing too wild actually happens. Which is interesting, since the story is actually about Louise Brooks (Haley Lu Richardson), an actress best known for some provocative silent films and her free-spirited life who was living her life way ahead of time. The other main character who goes through a life changing experience is Norma Carlisle (Downton Abbey‘s Elizabeth McGovern), Brooks’ chaperone.

We meet Norma in Wichita, Kansas, in 1922, where she and her husband Alan (Campbell Scott) are attending an evening of dance to benefit the Children’s Home. The star of that event is young Louise, who charmingly glides over the floor in her white robes and captivates Norma within seconds. When she overhears Louise’s mother talk about needing a chaperone to accompany Louise to classes given in New York by the biggest company in modern dance, run by Ted Shawn (Robert Fairchild) and Ruth St. Denis (Miranda Otto), she impulsively volunteers for the job.

Soon we’ll realise that Norma’s marriage is not in an ideal state. But that’s not the main reason for the trip: she arrived in Kansas on an orphan train from NYC, and she hopes to find more information about her birth parents in the metropolis. On the other hand, young Louise is only interested in her future and her dreams of becoming the best dancer on the planet. She doesn’t believe in rules and isn’t afraid to break them, but being a teenager she doesn’t have another choice than to bring an adult with her on this voyage.

Early on in the story, it becomes obvious that Louise is a magnet to men of all ages, she can convince them to do anything for her, but also doesn’t realise how this makes her look to the world surrounding her. Norma’s quote about “men not liking candy that has been unwrapped” will get a much deeper meaning further along in the story. Once arrived in New York, each of them embark on a self-discovering journey that will change their lives forever.

Both writer and director (Julian Fellowes and Michael Engler respectively) worked on the Emmy-winning tv-series Downton Abbey and its forthcoming feature film. The entire idea for the film was pitched by producer and star of the film McGovern, who came across the novel the film is adapted from. It was also great to see Géza Röhrig playing a key role in the story, after seeing his work in Academy Award-winning feature Son of Saul.

Everything is pretty much by the book, but it’s wonderful to see two women in different stages of their lives, changing the course of events and by doing so, changing the world around them how big or small that world may be.

The Chaperone is now playing in cinemas all over Australia.