Review - The Curse of the Weeping Woman 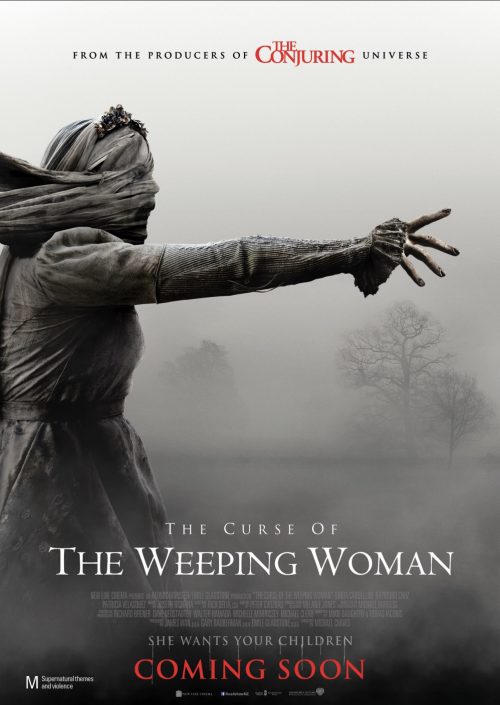 La Llorona is a very well known tale in Latin American folklore. It’s the story of a woman who, after her husband left, drowned her kids in a fit of rage, realised what she had done and took her own life. The legend goes that now she kidnaps children and drowns them, mistaking them for her own. Urban legends and ghost stories are always a good formula for a horror movie, so the ever expanding Conjuring Universe is cashing in on this and making it one of the best chapters we’ve seen so far.

It’s a very impressive and frightening film I must say. Having watched all the other Conjuring Universe-films (Annabelle and her sequel, The Nun and The Conjuring 1 & 2), The Curse of La Llorona or its Australian title The Curse of The Weeping Woman is the best chapter after the very first Conjuring. The cheap scares were more effective, mostly because there’s more build-up and atmosphere, and the scares feels more deserved.

The film starts in the 1600s with Maria (Marisol Ramirez), later known as our titular ghost, taking her children to the lake. We jump to the 1970s, and meet Anna (Linda Cardellini) – a freshly widowed social worker providing for her two children (Jaynee-Lynne Kinchen and Roman Christou) – who discovers that one of her clients, Patricia (Patricia Valesquez), has her two boys locked up in a closet. The boys are quickly taken out of her custody and La Llorona strikes, passing on the curse to Anna’s children. Desperate for a solution, she turns to an eccentric priest (Raymond Cruz) to rid their house of its newly acquainted curse.

The Weeping Woman mostly takes place inside Anna’s house, but there’s more layers to the story. Personal grief while trying to take care of children who are also in mourning, the whole stigma around a single mother working, mixed-race kids, and why this Latin American curse hits them. They’re all part of the story and blend pretty well to make it one cohesive tale. Cardellini shows us a side of her acting chops we haven’t seen before, and sells it very well. After her last big film Green Book, where her part was almost non-existent, its nice to see a woman of this calibre lead a horror film and isn’t afraid to take on a different challenge. The genuine fear, but taking charge of her role as a protective mother, always feels and looks real.

As far as the rest of the cast, there’s not much to talk about. Cruz as a priest is a little bit fascinating, but doesn’t have a big enough role to get excited about or to leave a lasting impression. The children are mostly screaming or thrown across rooms like dolls, by La Llorona.

It might feel a little bit repetitive at times and plays out like a short film stretched out to a feature length film (best comparison I can give you is Lights Out, directed by David F. Sandberg – Shazam!). The best bits of the film definitely include Cardellini and some incredible imagery. But only being 93 minutes long, is more than enough for the story to be told. Director Michael Chaves is also taking over from James Wan to direct The Conjuring 3 (he’s still producing and writing the screenplay), so I guess this director is just getting started and will grow to a larger scale in his next feature. The only advice I could give to new director Chavez is to not rely too much on what other horror masters have done in the past, create your own urban legends and voice.

The Curse of the Weeping Woman plays in cinemas all over Australia, this Thursday.