Review - The House That Jack Built 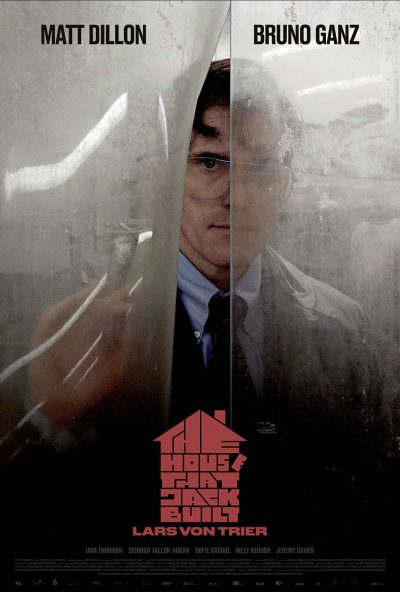 Maybe Lars Von Trier‘s most personal film to date? The fascinatingly confusing The House That Jack Built asks us if killing is an act of destruction or a work of art. Does this also apply to provocative director Von Trier’s filmmaking?

Set in the United States and spanning over the course of 12 years, we get to witness five separate incidents in the life of Jack (Matt Dillon). This is just a handful of “incidents” that marked different stages of his life. We see dozens of other victims stacked in a freezer throughout the story. While Jack speaks to an unseen character (Bruno Ganz), who might be his therapist, our killer walks us through his murders, occasionally ranting about the way deer walk in packs, the art of winemaking and its sugar content, or philosophic meanings on why killing might have artistic value.

The film’s running time clocks off at a 150 minutes and might scare off some viewers, although there are some more familiar names attached to the project, such as Matt Dillon (There’s Something About Mary) and Uma Thurman (Kill Bill). Dillon really showcases his acting ability here, as the titular character. The edginess and anxiety that runs through his performance is one of his best work ever. Some of the killings get more of a backstory, which we get to see throughout the several incidents Jack tells us about. But Von Trier never shows us the pay off of all these murders, although he wants us to invest into them. Sometimes it’s more interesting to an audience to solve a mystery, than to fully ignore the outcome and leave everything blank, I must say.

Jack wrestles with his psychological condition, although he seems to love doing it. This is also a way for Von Trier to showcase some of his earlier work through a short montage and kind of criticizing his filmography. It comes over more comedic than striking, but if this makes him feel better in the wake of all his controversies, then I’ll let the man be.

The story isn’t always captivating. A good example for this is his first incident in which he encounters Thurman’s character. Lots of build up, but not much payoff. On the completely opposite side we find an incident with Riley Keough, who plays a lover who’s totally clueless about Jack’s life. She’s the only one who really gets a bit of screen time and makes us feel for her angst.

Going into this, I expected more gore, but The House That Jack Built is quite restrained in that aspect. There’s never really something to look away from, which is surprising since Von Trier doesn’t usually shy away from shocking audiences. The finale is something hell bent and goes fully overboard – as if Von Trier let his mind race through his script and didn’t know when to stop. But it’s hard to dismiss a film made with such passion.

The House That Jack Built is playing in selected Australian cinemas starting this Thursday 7th of March.