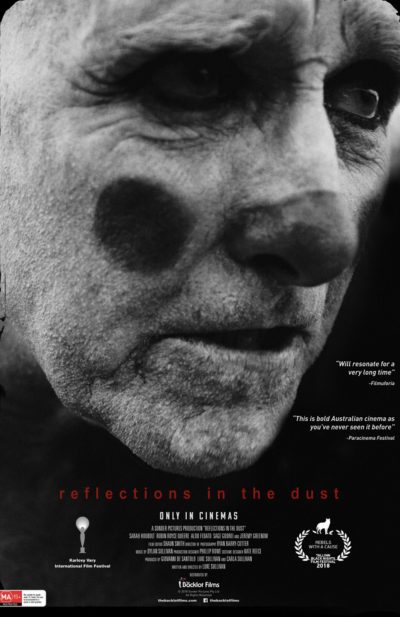 Reflections in the Dust is a post-apocalyptic tale combined with documentary elements made by one of Australia’s next generation of filmmakers. Director/writer Luke Sullivan’s experimental fictional contemporary picture might look more like a European art film, but definitely shows a different side of Australian cinema.

It stars the gravely sight-impaired actress Sarah Houbolt, who suffers from Hallermann/Steiff syndrome. From the very first second, she captures the vulnerability of having lived with this congenital disorder, just by looking directly into the camera. The imagery is often very claustrophobic and although most of the film is black and white the unnerving soundtrack makes it seem more vivid than its colourful interviews with the characters which flow in between each scene. They discuss subjects such as love, death, hope and fear with very honest reactions from Houbolt and Queeree.

The film starts with Freckles (Houbolt) answering a faceless interviewer why she doesn’t believe in love. The tragedy in her eyes, kind of says enough. She lives with her paranoid schizophrenic father (Robin Royce Queeree) – who wears clown makeup – near a lakeside swamp, roleplaying and looking for food from washed up debris. Her father’s mood changes like the tides, from aggression to tenderness, towards Freckles, who constantly has to be aware and carefully navigate herself into every situation. One day she meets a stranger, who reveals that her mom died in a circus accident, but her father tells him aggressively to go back where he comes from. When a gypsy woman (Ali Aitken) brushes Freckles’ hair lovingly, he loses his mind and starts acting out in a strange way – biting a tree and licking its bark for instance. Anger, fear and paranoia are recurring elements that consume our duo of lost souls, switching between this post apocalyptic world and the traumatic real-life interviews, until we reach a grim conclusion.

Reflections in the Dust could’ve easily been a play, but the docu-drama style is pretty unique for a feature length film. Cinematographer Ryan Barry-Cotter uses barely any light for his rough black-and-white imagery, so the colourful scenes that pop up in between might seem like a relief for some, yet its content is just as grim. The real stand out in this film is by far ex-paralympian Houbolt’s performance of a lost person in a world that doesn’t love her. She’s not an award-hungry performer, she intuitively understands the power of slight gestures and the tiniest facial expressions. This is what diversity and creating unique roles is all about – finding talent in the unknown.

Reflections in the Dust is playing in select Australian cities from March 7th.