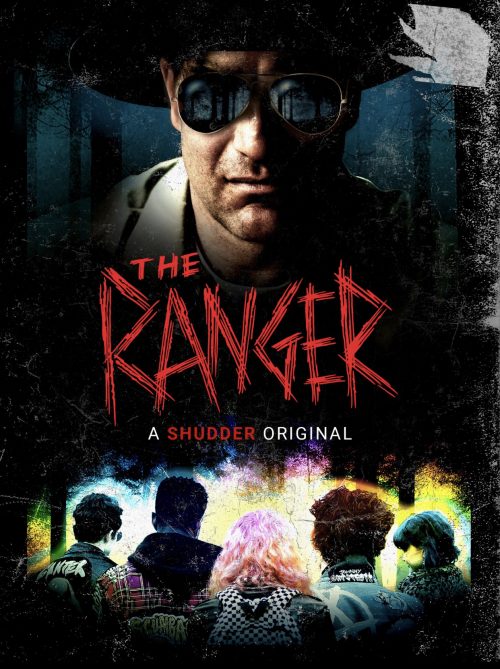 The Ranger follows a group of punks hiding out in a cabin in the woods after an unfortunate encounter with the police. Thinking they’re safe out there in the middle of nowhere, they’ll soon face a murderous park ranger that loves ‘hunting season‘. A promising punk-rock first act gets put down by a basic second act to end on a very satisfying note.

It all starts on the edge of a cliff, where a park ranger (Jeremy Holm) lectures a young girl (Pet Sematary‘s Jeté Laurence) about wolves. After their little chat, they’re seated around the dinner table where the girl is eating a sandwich and the ranger makes clear that she’s “a wolf” and she must not forget that.

We fast forward many years later. The young girl we just met, Chelsea (Chloe Levine – who’s currently also in new tv-show The Society), is hanging out at a punk club with her friends. Devil-may-care Garth (Granit Lahu), likeable Abe (Bubba Weiler) and eccentric Amber (Amanda Grace Benitez) are doing too much drugs and when an encounter with the cops goes terribly wrong one night, Chelsea’s cabin in the woods gets mentioned in a conversation, where our group decides to hide out for a bit. While Chelsea doesn’t really seem too keen on the idea of returning back to her family’s abandoned cabin, peer pressure gets to her and we’re off to the woods with a group of ‘live free or die hard‘-punks.

The van they used to get here, gets left at the edge of the forest and our group hikes the rest of the way, while brainstorming about potential band names. Once arrived at the cabin, it doesn’t take too long before some blood gets spilled. The group of friends is listening to punk music and up to mischief, when they hear a gun shot and one of them goes down. The rest of the group goes looking for the van, but it seems to have disappeared. When trying to get some help, they bump into the local ranger, and discover he’s the one going around killing everyone.

The Ranger himself is well performed by Holm, especially at the beginning of the film, but we never really get under his skin as to who he really is. The script was written by Wexler and Giaco Furino, who created a confused psychopath with no sense of motivation or ethics. The film tries to explain his motive, but by doing so confusing me along the way even more.

Rest assured, how generic the second act might be, this is a gory horror film with lots of blood. Faces are being cut in half, people are being shot and stabbed with anything that’s pointy, legs are being torn off – a little bit for everyone, just not the gentle souls among us. Director Jenn Wexler (this is her first feature as a director) doesn’t hold back on the horror-aspect and that’s a treat these days for horror fans like me. I just wish there was a bit more suspense instead of just doing it for the sake of gore. The story really lends itself to being something different, but it just never really gets there. The elements are all there, punk culture combined with PTSD mixed with a group of friends bonding in an environment that’s mostly out of their comfort zone. The entire first act is great, until it turns into a generic horror cliché we’ve seen in so many other slasher-films before. As fun as it is to see kids getting tortured (I know, I have a sick mind), it gets repetitive and boring really fast.

The cast is talented. Chloe Levine playing Chelsea, brings multiple layers to her character and does so very convincingly while keeping it natural and elevating every scene she’s in. The set-up of her arc and seeing her grow in less than 90 minutes is glorious to witness and this shows the writers actually knew what they were going for when bringing their screenplay to life. The supporting cast is good, but are clearly just here for the blood spilling – making poor decisions over and over again.

The Ranger isn’t the worst. It has a lot of things going for them. It’s well shot and has a unique look to it. It might be basic but it’s perfectly executed. The film isn’t memorable, but that’s okay, because I have a feeling this talented writer/director is only getting started.

The Ranger is now available to stream on Shudder.