Pop Culture Of Aus - And The Opportunity It Provides 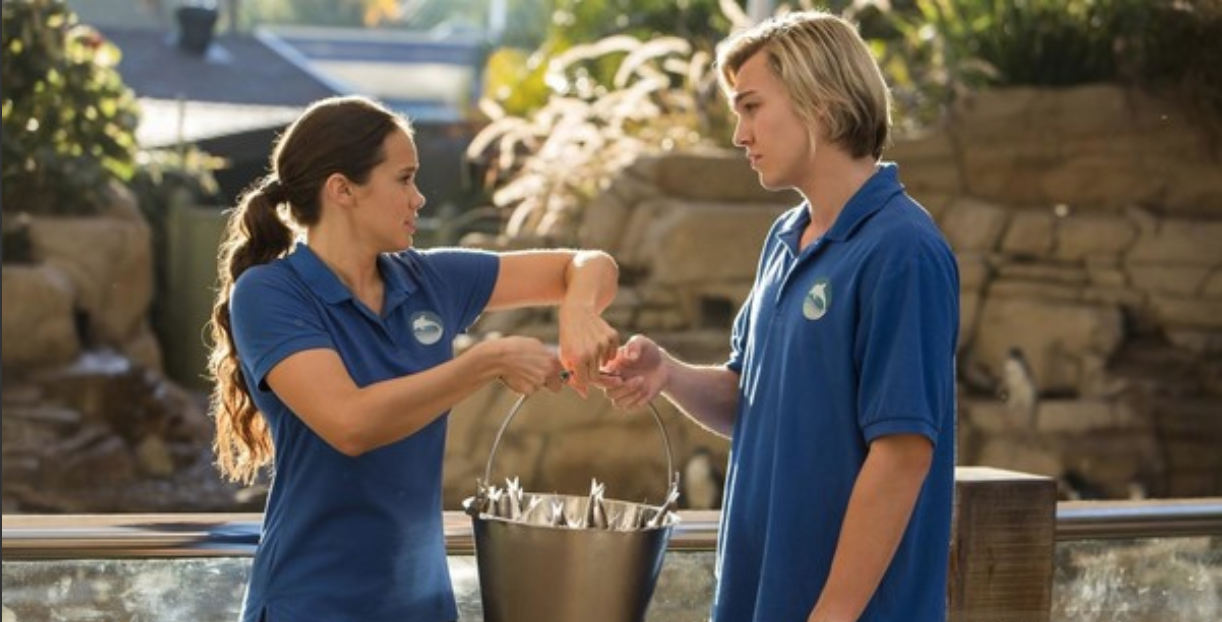 In the booming age of technology, it has never been easier to keep up to date with the latest, and past trends in pop culture. From table-top gaming to Superheroes, early 20th century pop culture has been resurrected and it has not only created imaginative new takes on classic past-times but it has also provided new waves of opportunities for Australian talent.

Mikey Wulff is a Queensland actor who is benefitting from the pop culture wave that has hit Australian shores. After getting his first big break on Mako: Island of Secrets as Karl, he has gone on to be involved in two comic book movies that were filmed in Queensland; Thor: Ragnarok and Aquaman.

So, to get this interview started, we first needed insider knowledge as to which of these comic book greats would win in a showdown!

Tough question. But I’ve gotta go with Thor. Taking me back to my Pokemon days, lightning beats water, so I think Aquaman would be in a bit of trouble with an onslaught of lightning bolts.

However, in real life, no man wants to take on Jason.

Marvel and DC have been rivals in the comic book world since day one, and the translation to the silver screen has not forgotten this long-term playful feud. But how would appearing in a Marvel film compare to a DC film?

The Marvel film was more intensive. I worked on Thor for 3 months in a variety of roles, alongside almost every cast member which was sick. Longer days, but more rewarding (as I was) learning and watching from the best of the best.

Aquaman was… wetter, but still very rewarding. I was mostly jealous of Jason’s recreational rock-climbing wall in Studio 4. But being a DC fan, I must say it was a bit of a dream come true working on a film from my favourite comic universe. I wish I could have worked on it longer.

Before these international juggernauts, Mikey’s first big break was as Karl on the Network Ten mermaid sensation Mako: Island of Secrets. From Australian TV to Hollywood projects, both would have been extraordinary experiences and yet very different.

Mako was my first real look into multi-million dollar production and getting to be in one of Jonathan Shiff’s productions was a bit surreal as my first real break as I had watched a lot of his shows growing up.

Thor was amazing working that hard and watching one of the biggest movies of the year get made. Seeing what goes into it first-hand made me hungrier than ever, the experience just kept getting better, I mean never in my wildest dreams did I think Sir Anthony Hopkins was going to ask me about how my lunch was and to call him Tony. Getting to see how Director Taika Waititi brought so much fun and energy to a set, he is seriously hilarious, made me so much more excited to work for those goals of acting with these awesome people but also made me realise that there are awesome people in every corner of our industry.

Although Thor: Ragnarok took in 854 million USD and Aquaman broke records with its 1.148 billion USD, there have been fears that the silver screen might be tired and over saturated with the superhero genre and Marvel formula. But even after the ten year build up to the hard-hitting three-hour Marvel film, Mikey still holds hope for the variety of stories that can be pulled from the panels.

The comic worlds are so expansive and detailed, that if done right, we should have superhero movies forever without the genre getting over saturated. The fact of the matter is that there are encyclopedias of information on superheros to bring to life.

Australia’s involvement doesn’t stop at being an incredible location for block buster films but has also stretched into being a creative contender in the world of Netflix originals. Now with their foot in the door due to Tidelands, Mikey says Australia is certainly on the radars of the right people.

I think I speak for most Australians in the industry that we would like to see nothing more than to bring more filming opportunities to our shores. Our country is seriously so beautiful It deserves to be shown off a bit more in the cinematic world along with our talented people.

But it’s not just Australia’s sunburnt country that’s turning heads. Netflix has been known to praise Australian content creators for “creating high quality content, and succeeding on a global stage”. And with this kind of praise, there is a world of opportunities just waiting for a variety of Australian talent.

The sky is the limit in Australian film. L.A. is literally filled with seriously talented Aussies chasing film. I have at least 5 or 6 friends living over there now working, all of which like I’ve just said I know would like to show off some of our own stuff from home. I think we will start to see Australia step out of the ‘country town’ country to a really more desired place to live and set up business for film.

There is a question of Netflix’s influence beyond its own streaming service with Australian scripted entertainment. With content like Harrow and Secret City starting to grow from the creative lull of free to air reality TV, Mikey gave his opinion on if he thought streaming services like Netflix had reignited Australia’s creativity.

100 %. How can you not be inspired from new scripted content?! I like to say everything is a remix. Ideas come from ideas and I absolutely love being able to watch online and I especially love being able to catch up on live TV online. It makes it so much easier to get on the same page as the craze to see what people are talking about and to create some discussion.

Black Mirror is one series that has taken Netflix by storm, especially with their 2018 Bandersnatch episode which reflects Mikey’s latest project Scrap with its own “choose-your-own-adventure” theme. With its own interactive story, Scrap goes beyond the narrative to promote fascinating locations around the Sunshine Coast.

For me, both (Scrap and Bandersnatch) took me back to a nostalgic feeling like I was reading old Goosebumps books where I would be flipping page to page excited to see what chaos I could cause my character.  Bringing that to screen was and is super exciting and I can’t wait to see what the genre will bring in the coming years. Trust me you won’t be disappointed with Scrap’s interaction either! Rachel Forsyth did an amazing job putting together some great pathways of adventure that are all great fun to explore.

From Hollywood films to Australian TV and web series, Mikey has had experience across a variety of mediums. And in the age of social media, there are ever evolving methods people can use to share their stories like with YouTube, Vine (RIP), and Instagram stories. The availability of equipment to capture and share stories has certainly changed various aspects of the entertainment industry but has it made it easier or harder for aspiring artists to get themselves known?

I think people are making it look a lot easier than it is. Now every man and his dog has a camera on him and a global audience is able to see real content all the time. Creating and sustaining such a high level of entertainment that a global audience is immersed in for more than a couple minutes is now harder than ever as there is just so much bloody content being shot.

Outside of acting, Mikey is as true a nerd as any and had even introduced my brother and I to a little card game called Magic the Gathering (MTG). Of course, ‘little’ here being a choice word for a game with various competitions across Australian pop culture stores as well as holding cards worth over $1,000. With the game also affectionally referred to as ‘cardboard crack’, Mikey shared his thoughts as to why MTG had become so popular.

Ooo baby, where do I start with MTG. This game is as old as me and is basically the Godfather of card games. I like to describe it as a cross between Yu-Gi-Oh and Chess. It is the ultimate nerd’s card game with stunning art and an incredibly deep lore behind it. Things with this much depth can’t not be appreciated. You can learn how to play and not play for 10 years and buy the new set to pick up some cool new elves for your elf deck you haven’t touched since.

Along with MTG, games like Exploding Kittens, Cards Against Humanity, and Settlers of Catan have been helping make table top games popular again. It’s not unusual for things like gaming to make a resurgence in pop culture, but it’s certainly interesting that table top gaming is becoming popular again in the age of technology.

I think nerd is just becoming ‘cooler’. With so much information in the age of technology it’s nice to take a break and sit back and play some crazy ass games to take us away from all that’s going on in this overstimulated world. Table top games force you to take the break from screens we all need, and interact only with the people and game in front of you.

Aside from the ever-intensive past time that MTG can become, here are a few things Mikey says you should be watching, reading, and playing:

You need to be watching My Hero Academia, you need to be playing Apex Legends, and you should be reading Nevernight and getting ready for Piera Forde’s web series adaption, currently in pre-production.

The thriving industry in Australia has provided opportunities for talent whilst also showcasing the locations we have on offer. It is no question that pop culture shows no signs of slowing down, especially with the insurgence of the DCEU and MCU.

If you want to immerse yourself more into the world of pop culture, then you should be looking at attending Oz Comic-Con’s next convention. Oz Comic-Con is Australia’s largest celebration for all things pop culture, no matter what fandom. Rub shoulders with celebrities from a range of films and television shows, meet your comic book idols in artist alley, and explore the endless shopping opportunities available from a variety of merchandisers.