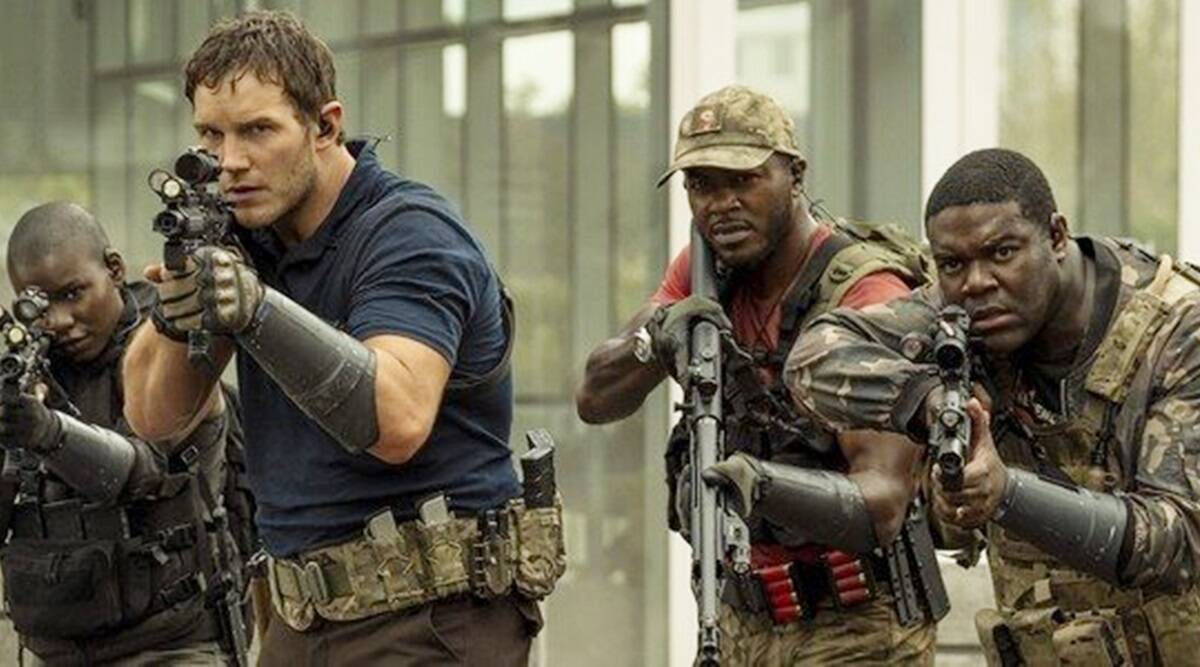 2020 saw many production and distribution companies adapting to the sudden shift in climate when it comes to releasing their movies with theatres worldwide being closed. One such adaptation came through Paramount Pictures selling most of their releases to Amazon for streaming on Prime Video. For movies such as Coming2America or The Lovebirds (on Netflix) – it makes sense! Lower budget comedies make for great Friday night viewing at home, especially for an escape during the pandemic, and is a low-risk way for the production companies to still make money on their movie. However, I feel like I have finally seen the one movie this has affected in a slightly negative way – and that is zero fault of the movie itself.

The Tomorrow War takes place in 2022, where during the middle of the World Cup soccer final, a large portal opens in the centre of the pitch and a group of soldiers from 30 years in the future call upon the people of the present day to assist them in a deadly war against an alien race that is ravaging the planet. In the year that follows, a global draft for soldiers to be sent into the future is created, leaving Dan Forrester (Chris Pratt), a former Green Beret-turned- science teacher, no choice but to be sent into 2051 to assist the fight against the ‘Whitespikes’.

The reason why The Tomorrow War is a victim of the ‘streaming-release’ is because its an exciting, action-packed, genuine blockbuster movie that literally would have benefited from a run on the silver-screen. Directed by Chris McKay (The Lego Batman Movie), his first live-action feature film captures the intensity and brutality of the action in such a way that makes the alien’s feel like a genuine threat to the humans. Gunfire is loud, explosions are ridiculously huge, and Chris Pratt goes hand-to-hand combat style with a goddamn Whitespike. The action in this movie is insanely fun and is easily the movie’s biggest strength.

The design of the Whitespikes also adds to their threat as the antagonist of the film. The sheer scope of their size is terrifying, mixed with creepy, sharp-tooth filled mouths and deadly projectile-firing tentacles, it’s the first time in a while for a sci-fi movie that I’ve been genuinely impressed by the CGI and overall design of the aliens. There is an overuse of that CGI throughout the movie, but it’s definitely passable and less detrimental to the overall experience than one would expect it to be.

It does feel like the script was written around Chris Pratt being the funny guy, but also the caring father, but also the bad-ass action start, but also the smart leader, but also the emotional core of the film. It’s a lot for one character to juggle in one movie, but the pure charisma that Pratt has on the screen makes him an incredibly likeable protagonist. You feel his emotion when it’s required, you laugh when he cracks jokes, and when he fights that alien with nothing back a blade, you feel like it’s pretty damn cool. Another standout is Sam Richardson, who brings much comedic relief to the intensity as a man completely out of his depth being on the front-line in this war.

The main issues with The Tomorrow War come in its story and pacing. There are some very interesting reveals in the third act that work well storytelling wise for the movie, but a lot of the story and character arcs are ones you’ve seen before in the likes of Independence Day or War of the Worlds. The familiarity of the plot does accentuate the action more as you don’t really lose where you’re up to in the story and it’s not overly convoluted (even with the time-travel paradoxes that arise throughout), making it an experience that can be enjoyed by movie-lovers of all calibers.

The Tomorrow War is also a touch too long. Clocking in at 140 minutes, there were definitely scenes and moments that could have been cut to make a more concise and cutthroat pace picture. But, leave those action scenes untouched, because they’re awesome.

The Tomorrow War is a genuine blockbuster-sci-fi-action bonanza. The action is intense and explosive, and the performances make you care for each character involved. Be prepared for a generic plot and long runtime, and if you can bypass that, you’ll have a damn good time with a movie that definitely deserved the big screen treatment, but at least we can still watch it at home.

Like Loading...
Newsletter Signup
In this article:amazon prime, chris pratt, movies, nick lbarrow, prime video, the tomorrow war
Up Next: