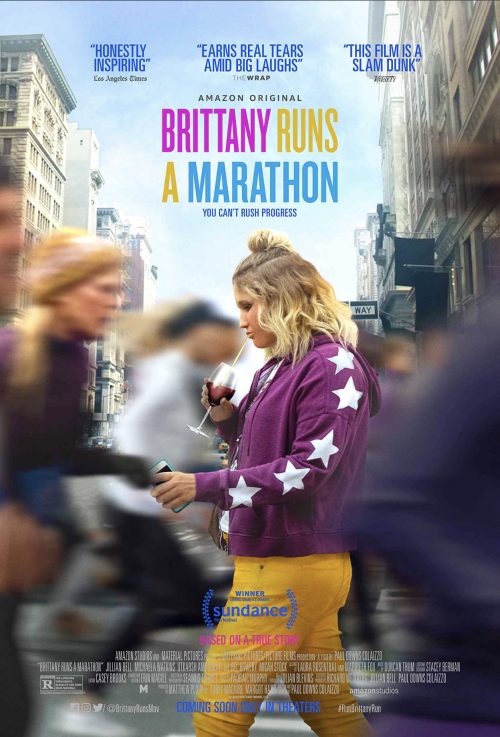 After winning the Audience Award at Sundance Film Festival at the beginning of the year, I couldn’t skip this at Sydney Film Festival. Brittany Runs a Marathon was actually the first film I bought a ticket for at this year’s SFF. And what a great choice!

The story is loosely based on the experience of one of director/writer Paul Downs Colaizzo‘s friends. Jillian Bell, who’s not really a household name but has that “I’ve seen her in something before”-look, has just become an A-lister. Her performance as Brittany reminded me mostly of Emma Stone‘s “into the spotlight”-performance in Easy A, although this character has many more layers. Seeing Bell embody this character so well, just shows how talented she is. Former SNL-writer and supporting cast-member in films such as Rough Night, knows how to do comedy, but her balancing the familiar with the dramatic aspect, makes this character even more alive. She sells every facet of her performance, that’s worth the admission alone.

After visiting a cheap doctor she found on Yelp in pursuit of an Adderall prescription, Brittany has to change her lifestyle after getting a worrying diagnosis. Doctor’s advice: no drugs, no alcohol, be more active and eat healthier. So after a few days of drowning in tears, she decides to listen to prying neighbour Katherine’s (Michaela Watkins) advice: little goals make a big change. So instead of instantly joining her active neighbour for a run, she decides to start small and run a block herself.

After successfully running a block and then some, Brittany joins and befriends fellow running club member/neighbour Katherine and other newcomer in the club Seth (Micah Stock). All three of them are trying to shift their mindset and soon decide to run the New York City Marathon in less than a year. This could easily go for the obvious inspirational sports-film, but Colaizzo decides otherwise. Brittany fails and backtracks with the journey towards a better life and that gives us plenty of laugh-out-loud moments where we get to connect with this character. This makes everything that happens on screen so much more satisfying and relatable. Don’t we all want to change something, but have a hard time doing so?!

Brittany goes through very hard times, but what I noticed was Bell changing with the character – physically and mentally. If this is what method acting is all about, then give her an in-season-pass for all the award-ceremonies to come. Like her initial challenge, Brittany doesn’t forget to take on small challenges and makes tiny changes. We get to join her on this slow but heartwarming journey. The pacing and power of the script is one of the many strengths of Brittany Runs a Marathon.

Jillian Bell is a strong performer, but her supporting cast plays a band of misfits that have trouble moving forward with Brittany. Utkarsh Ambudkar as an unexpected love interest, Alice Lee as Brittany’s roommate/best friend and Lil Rel Howery as some sort of father figure, they all push her (and hold her back) from achieving her goals. Colaizzo as a first-time filmmaker has a hit on his hands and exudes confidence in his filmmaking with such modesty that it almost becomes charming – from montages to social media graphics that are done in a way it doesn’t become distracting, but fits right in with the narrative.

Not only is character Brittany a crowdpleaser who only seems at ease when she’s making other people laugh, Brittany Runs a Marathon is a genuine crowdpleaser which concluded my screening with thunderous applause, cheering and crying – me included.