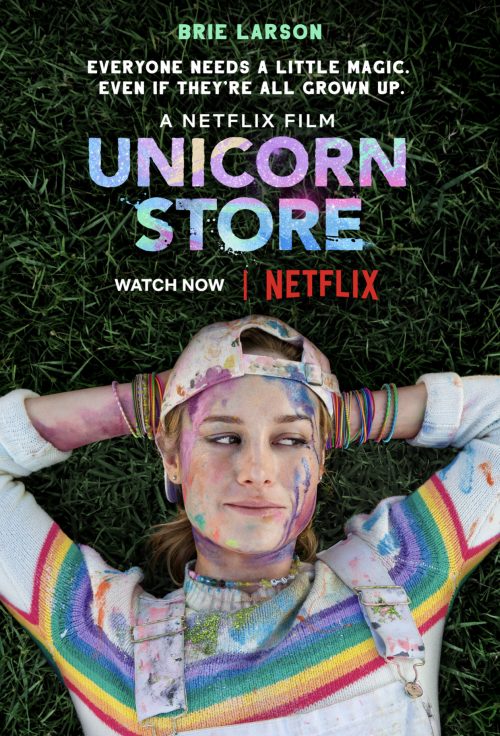 The latest American indie film, directed by and starring Brie Larson as unicorn-believer, takes itself way too serious to be enjoyable. And that’s just me being generous.

The very straightforward title says it all – Unicorn Store. It’s not a metaphor, there really is a store where you can buy a unicorn. Kit (Brie Larson) is a socially awkward artist whose outlandish art doesn’t really connect with her teachers/audience. Minimalism is what it’s all about these days. But Kit loves rainbows and glitter. Nothing like her surroundings, where everything looks more monotone and boring. Her parents (played cheerfully by Joan Cusack and Bradley Whitford) try to get Kit to grow up, but don’t see anything change. A TV ad changes Kit’s perspective on life and soon she lands a job at a PR agency. At her boring office job, she meets some mean co-workers, a supportive assistant and the VP, who’s romantically – yet in a creepy way – interested in Kit and her goals.

Kit soon gets invited to a mysterious place called The Store, where she meets a strange salesman (Samuel L. Jackson) who has an offer she can’t refuse – to own a unicorn. The Store looks like a place you’d see in Twin Peaks. But first, Kit has to prove herself worthy by building a stable for the mythical creature.

The screenplay by Samantha McIntyre, is very formulaic and gets more boring with every scene. It really is quite a chore to finish this, if it wasn’t for Larson’s performance that keeps this entire thing afloat. I have to congratulate costume designer Mirren Gordon-Crozier and production designer Matthew Luem, as their efforts to make everything look a bit more interesting didn’t go unnoticed. On the other hand, Brett Pawlak‘s camerawork and Alex Greenwald‘s score are so dull, that it doesn’t help to lift Larson’s direction at all.

Larson’s directorial debut seriously missed the mark and probably wouldn’t have been picked up by Netflix, if it wasn’t for her success as Captain Marvel. As flat as Unicorn Store is, Larson clearly gave it her all as an actress and it delivered its message to be true to yourself no matter what everyone else thinks about you.