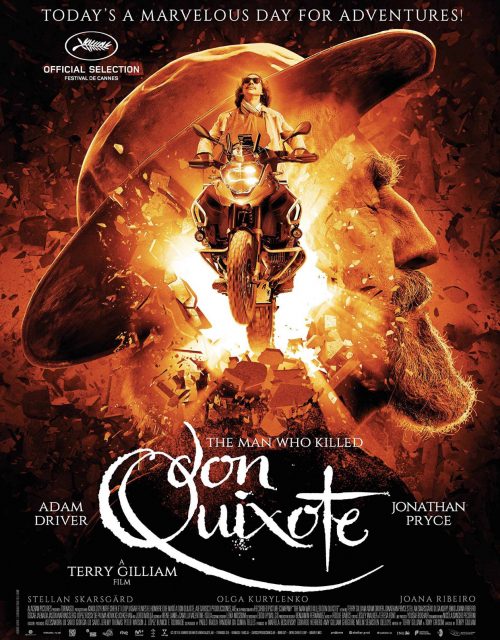 It’s been quite the journey for director Terry Gilliam to get this project made. More than 25 years actually. And to bring something so unsatisfying, exhaustingly frustrating and unrewarding seems like a waste of time.

After some legal problems with producers and distributors, the film finally got its premiere last year in Cannes. Even that night itself, attendees were uncertain if it would actually be shown to them, since it had been stuck in legal purgatory for years and everyone was claiming it as their own or trying to stop it from being shown to the public. Many Gilliam fans will be happy to finally be able to witness The Man Who Killed Don Quixote, but I’m not one of them. His unhinged visionary storytelling and quest to mix fantasy with reality is chaotic and looked tortuous.

In the 2002 documentary Lost in La Mancha, we find out that Gilliam had tried to secure financing for his big budget film and failed. The shoot went on for only six days with Jean Rochefort as the 17th-century Don Quixote, who mistakes a modern-day American commercials director (Johnny Depp) for his loyal peasant sidekick Sancho Panza. Rochefort’s health caused production to be suspended, and soon everything fell apart. Even John Hurt jumped in to revive the project, but alas.

Gilliam likes to fiddle with the subject of imagination in his films. And although Brazil, The Zero Theorem and his Monty Python-films will always be seen as some of his better work, Don Quixote is tough to sit through.

In our finalised 2018-version of The Man Who Killed Don Quixote, we follow Toby (Adam Driver), a cynical egomaniac who doesn’t care about production schedules while filming a commercial in Spain. He soon stumbles on a pirated DVD-copy of a film he made in Spain, when he was still in college. He decides to revisit the locations from his student film, to then find the local villagers who acted in it to be constricted by society. The innocent young innkeeper’s daughter Angelica (Joana Ribeiro) has become a whore, says her father, and the old shoemaker, Javier (Jonathan Pryce), who played Don Quixote, went crazy and is still convinced he is the character he once portrayed, always on the lookout for his perfect woman.

After a series of events cause a fire in the village, the clearly deranged Don Quixote helps Toby – who he thinks is his loyal sidekick Sancho – to shake off a couple of cops by traveling across the countryside. Toby’s sanity gets tested, while Javier completely loses his mind. In the background Holy Week-festivities aren’t helpful when everyone prances around in period costumes.

Somewhere in all of this, there’s some logic buried deep under the surface. But it gets so boring and every time someone tries to be funny, it becomes even more tiring. None of this is going anywhere, it’s like as if this entire film doesn’t have a plot. This isn’t anything like I’m used to seeing from Gilliam, although it should be a very familiar theme – fantasy is what he’s usually very good at. Even the religious factors in here that are based on history in Spain – when Jews, Moors and Christians lived together is just underdeveloped in the screenplay. Then why would you bring these subjects even up, if it’s only going to confuse audiences even more?!

The locations should be stunning, but having been to Spain myself many times, the scenery being shown is colourless and flat. I think Gilliam wanted to be over with it and just finish his film once and for all. The supporting cast and Pryce seem lost, one-noted and I think the less I say about them, the better.

The one positive note I do want to address is Adam Driver, who works wonders with the tiny bit of material he’s given. He’s always been a strong actor in my opinion, and he knows how to handle ‘strange’ in a natural way. His character might not translate as being cohesive, but you can tell he’s just rolling with it and trying to blend with everything that goes on around him.

I don’t know who the audience is supposed to be for this, and honestly I don’t want to remember this film. The Man Who Killed Don Quixote was dead on arrival and Gilliam tried to prolong it’s funeral. Time to move on Terry.

The Man Who Killed Don Quixote will play in select cinemas all over Australia from Thursday April 11th.