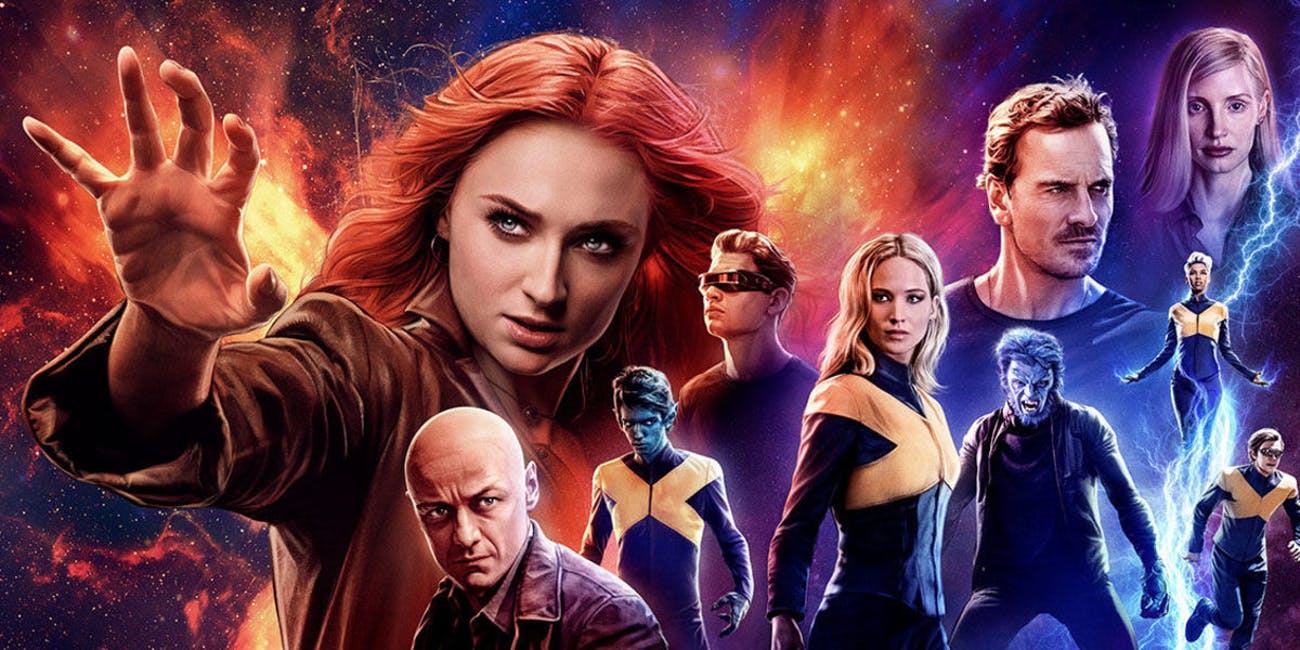 It’s time to say goodbye to our favourite mutants, after 19 years of films the franchise is coming to a close with a re-telling of the Dark Phoenix story. If this sounds familiar it is because they attempted to do this in 2006’s X-men : The Last Stand and while it didn’t go down to well with fans, Fox have given the story line a movie of its own to send the X-men off ready to be rebooted by Disney somewhere in the future. What should have been a fond and memorable farewell turned out to be a forgetful throwaway film with great performances with a mediocre story that suffers from horrible pacing issues that make it feel like 2 or 3 different films smashed into one 100 minute disappointment.

It is set a couple of years after Apocalypse with the X-men in generous public favour with action figures, screaming fans and a hotline phone direct to the President of the United States. When a spaceship launch goes awry the X-Men head into space to assist when Jean Grey (Sophie Turner) is exposed to a cosmic power that enhances her mutant powers making her more powerful than anyone else on the planet. When Jean starts acting erratic her X-Men friends Raven (Jennifer Lawrence) Beast (Nicholas Hoult) jump in to try and help her control the power, however things don’t go according to plan and when Jean is confronted by a mysterious alien played by Jessica Chastain who is trying to take over Earth and eradicate humans Jean must decide if she will use her power for good or evil.

Elsewhere Professor Xavier (James McAvoy) is riding high on the fame of their recent relationship with humans. He is shown revelling in the joy of being on talk shows, hosting benefits with wealthy clientele, on the cover of books and action figures. A good portion of the story explores his history with Jean and how he found her after the accident as a child. The first half of the film explores the relationship of and what can happen when trauma is suppressed rather than dealt with. It really explores the idea well and loops in the other characters, particularly Raven and Beast, who are the last of the” First class” still hanging around the X mansion. Showcasing a different side to Xavier was a risky move, I don’t know if this trait is ever explored in the comics, here it does feel a little surprising in keeping with this character. That being said showing a more human side to Charles was interesting to watch.

Perhaps the best part of the film is Lawrence, her performance as Raven is flawless. She is constantly the voice of reason, in particular one fitting line “The women around here are constantly saving everyone else, we should be called the X-Women” which on a side note did get a cheer from the crowd in our session. If this wasn’t enough character drama, Magneto (Michael Fassbender) is sought out by Jean after she feels betrayed by Charles. He is running a commune separated from the rest of society. He is joined by hair braid whip man and another mutant who can read and control minds. When they feel the weight of what Jean can do through a helicopter battle, Magneto rejects her as well causing Beast to join his side in an attempt to kill Jean for her recent decisions.

It’s really from here that things go downhill. The film moves at a sluggish pace with sprinklings of action pieces littered through them. If it wasn’t for the solid performances it would be a complete wash. This then changes gear again in the third act with an epic train battle and final showdown that struggles to be as epic as the final scene in the final X-Men movie should be. The train sequence is far too long and while some of the CGI looks incredible, others look like a direct to VHS movie from the 90’s (Storm). Most X-Men films are epic in scale and have weighty action that coincide with the story. Here the story is told with an odd pacing that doesn’t ignite to be either good or bad, it just falls kind of flat. The train wreck scene really feels like it is a different film and with the epic battle being wrapped up pretty quickly, it rarely lingers long enough to leave a memorable impression.

The visuals in this film are great, the Phoenix effects that run through Jean and encompass her are beautiful to watch (and may just remind you of another recent Marvel superhero). The train scene while being shown at night is nothing short of spectacular. The way that Magneto rips the train apart trying to destroy the aliens is a lot of fun to watch and every mutant gets their moment to shine. It is a fast and furious fight scene with great cinematography by Mauro Fiore set against the night country side. In a lot of blockbuster movies night action scenes can be blurry and hard to see, fortunately this film avoids that delivering dazzling action sequences that effortlessly float between inside and out of the train.

While the special effects are spectacular, the script is severely lacking. In fact, I would even go so far as to say if they have spent more time on the this than the special effects it would have been a much better film. The first half of the film has a solid story exploring themes of trauma, abandonment, fame and family. It is balanced quite well for this portion of the film and is actually intriguing to see how it all wraps up. Where it falls is the obvious re shot second half of the movie that kind of throws these out the window for spectacle.

X-men : Dark Phoenix had the potential to be a big farewell to these characters we have loved (and hated) for the last 19 years. Regrettably a good story was compromised for spectacle and the film suffers from poor pacing and a generally flat tone. Fortunately the actors deliver solid performances, in particular Lawrence and Turner steal the show here showcasing the boundaries of family and fame. Fans of the series may be disappointed by the lacklustre finale (particularly if compared to the 90’s TV series plot line of Dark Phoenix)

Previous article
Review – I Am Mother
Next article
SFF – Miles Davis: Birth of the Cool