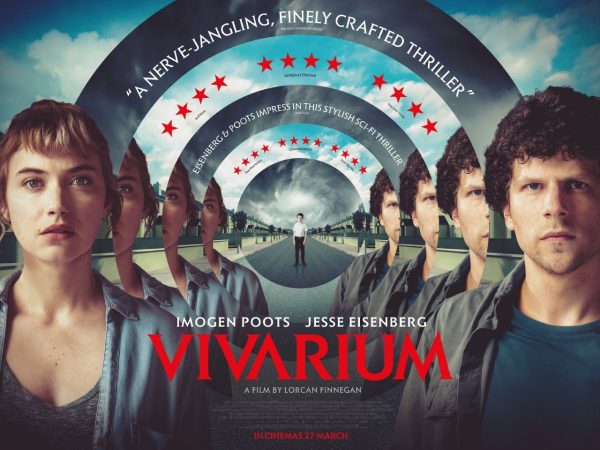 After the sweeping success of Parasite in 2019, and the themes western audiences flocked to discuss arising from Bong Joong-Ho’s masterpiece, one might think it inevitable that films with a similar slant will emerge for hungry audiences suffering from withdrawal symptoms.

Director Lorcan Finnegan may not have had such a pretext in mind when he co-wrote Viviarium with Garret Shanley, but his timing is apt. For his opening sequence, a cuckoo is shown hatching from its host’s nest, and instinctively knocking the legitimate hatchlings and unhatched eggs out of the nest. It soon demands to be fed by incessantly squealing without pause until its demands are met by an ever-obliging adopted mother who treats the cuckoo as her own.

This brooding parasitic behaviour is factually known the world over as typical of certain species of cuckoos. And so too Vivarium has its own parasitic theme. Gemma (Imogen Poots) is a teacher in Ireland who is in a relationship with Tom (Jesse Eisenberg), a gardener. They are looking for a house to move into and start a new life together. They meet a very odd real estate salesman, Martin (Jonathan Aris), who uses all the right words in his sales pitch typical in the real estate world. They agree to be shown a house in Yonder, a newly developed housing estate just outside of town.

Upon entering the estate, they see the entire estate looking quite fake. The houses all look the same, and even the sky and sun appear unnatural. Martin takes them to house number 9 and there, they are shown inside and out before Martin mysteriously disappears. When Gemma and Tom use this opportunity to leave, they find themselves driving around in apparent circles around the estate and yet always ending up in front of house number 9. They are forced to spend the night in this house and in the following days, they discover their fate is to remain locked within this estate and raise a baby boy which is left on the street for them.

In a matter of weeks, this baby is now a young boy and is completely reliant on its hosts Gemma and Tom. As like the cuckoo in the film’s opening sequence, the boy demands food and learns behaviours in a very peculiar fashion. Gemma and Tom slowly lose their health and sanity as they repeat their days in this surreal house with an even more unusual child who displays quite alien behaviour.

The film covers Tom’s rapid mental and physical downfall and the breakdown of his relationship with Gemma, while also showing Gemma’s conflict in being loyal to her partner but playing the role of a mother to a child who she feels compelled to nurture. She is the barrier between the child and Tom’s increasingly hostile relationship. It is only Tom and Gemma’s combined fear of the boy, who becomes increasingly distant and disconnected from them that brings them together. But their eventual reunion comes just as the film reaches its climax where the boy shows his true colours and Tom and Gemma discover their fate.

Because the film jumps straight into its setting where we view their day to day burden in their homogenous home, there is little to connect us to Gemma and Tom. They are just like any other couple and while this may be Finnegan’s intent – showing us that humanity is all the same, the lack of character development makes them rather unrelatable. There is also little chemistry between the two leads which is unfortunate given their overall performances are strong.

Poots and Eisenberg deliver a transfixing journey into Gemma and Tom’s respective physical and mental erosion. It makes for uncomfortable, yet engrossing viewing where we can’t help but continue to watch and discover the outcome of this dark and depressing world they have fallen into. The disturbing and uncomfortable musical score adds to the foreboding and tense atmosphere which is a commendable achievement for composer Kristian Eidnes Andersen.

Of course, a significant part of the motivation to see this through is that we are fed repetitious offerings of Gemma and Tom’s day to day hell with the boy. Given ninety-five percent of the film takes place within the confines of the house and the street-front in front of number 9, it makes for some tedious viewing and we just want Finnegan’s commentary on society to get to its conclusion. The spoiler at the start of the film with the cuckoo essentially robs the film of much of its suspense. Surely the ending will be that the boy will just fly away and leave his hosts to their own fate? You will have to wait as we all did to find out.

Finnegan’s social commentary – the western civilisation’s obsession with finding the right domestic setup, the blight of consumerism, even the parasitic nature of the human species, are all very obvious here. But other than a clever, creative interpretation of how he sees it, there are no answers here. It sends you off feeling more uncomfortable and perhaps more depressed about society’s outlook as you may have been 90 minutes earlier.