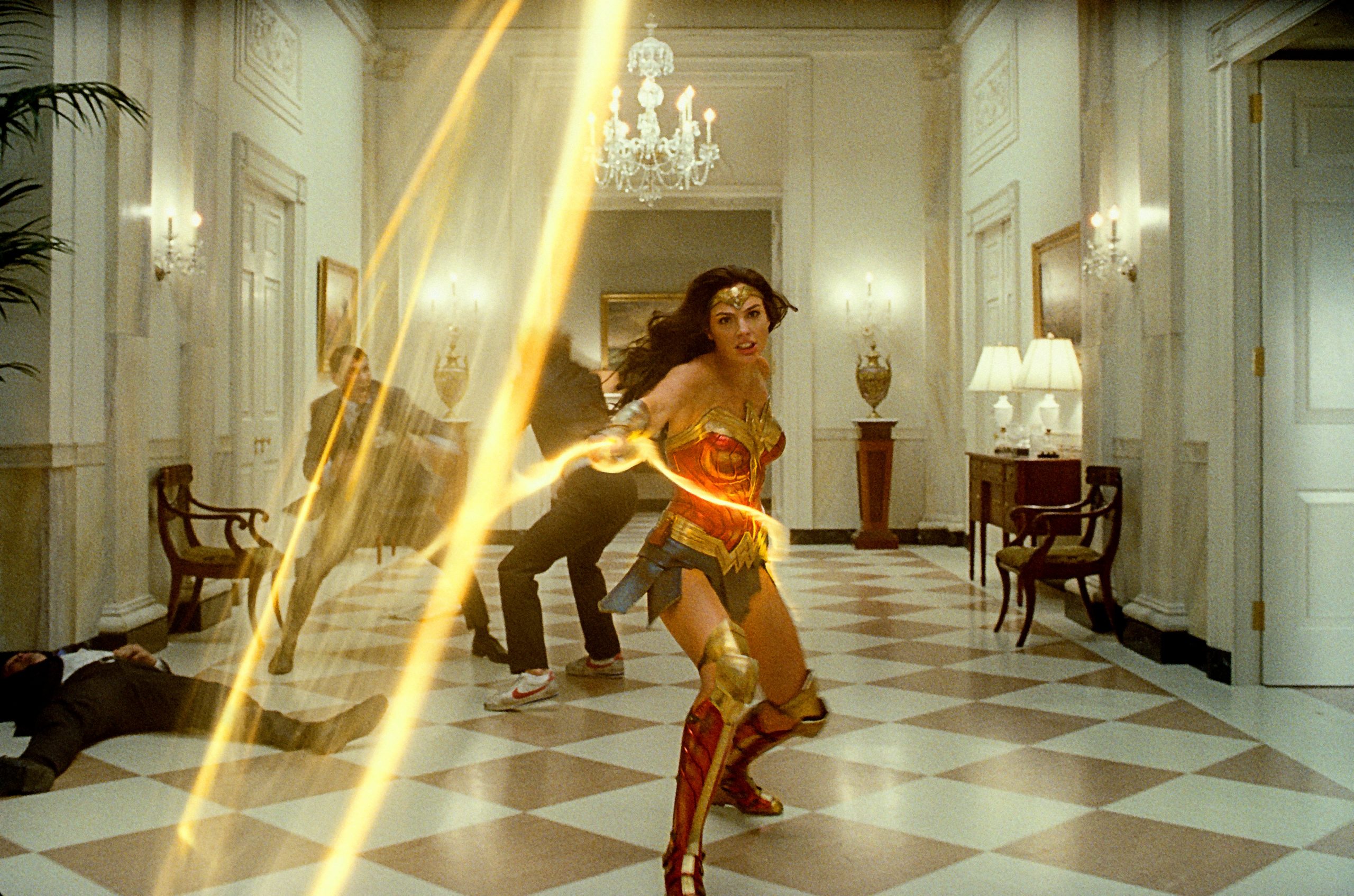 It’s been a year since Wonder Woman 1984 was meant to be released, since that time it has been pushed back 6 times and now finally, in the midst of an ongoing 1 in 100 year pandemic, Warner Bros. have decided that it is time to release the film in theatres and on HBO Max on the same day. Opinions about this decision aside, I bring up delays because it really does feel like NOW is the right time to release this movie. In a year full of despair, death and separation, the power of Diana Prince and the Wonder-ful world that director Patty Jenkins and star Gal Gadot have created seems the perfect vaccine to send off the year 2020 with a blast of hope, love and light for the holiday season and for the future.

The story is set in the year 1984, Diana (Gal Gadot) is still mourning the loss of the love of her life Steve Trevor (Chris Pine) and has found a career in antiquities at a museum in Washington, DC. When new gemologist Barbera Minerva (Kristen Wiig) starts working with her and they discover an ancient stone that grants wishes for anyone who touches it. Local business entrepreneur Maxwell Lord (Pedro Pascal) has been looking for the stone and will stop at nothing to possess its power. Diana must re-emerge as Wonder Woman to stop Maxwell and tame Barbara from a fate worse than death.

Immediately you notice the difference with this sequel, changing the time period is a radical swing from the gloom of WWI from the previous film. The film shines and radiates with neon colours that explode off the screen that suit the campiness and ridiculousness of the premise. This is definitely not a put down, there are a lot of typical superhero movie tropes in here that have a fresh spin on them to help them feel authentic and carry the film. The technology boom and era of “wanting more” is thoroughly explored through the character of Lord. Surprisingly showcasing Diana’s humanity is a big part of the story. Revealing just how cut off from the world she is after the events of the previous film and a framed photo of an elderly Etta packs an incredible emotional punch.

Newcomers Wiig and Pascal were the absolute right choice for these characters. Initially I was concerned that Cheetah would turn into a CGI schlockfest like last Christmas’s Cats-atsrophe. Fortunately the CGI effects are used with incredible restraint and only when necessary. Wiig shines as the nerdy, nervous, bumbling Barbara, her friendship with Diana is one of the highlights of the film and her descent into Cheetah villainy is fuelled by Lord’s encouragement. Pascal is the most charming he has ever been in this role with his hair almost earning a character in its own right. Lord is a father, entrepreneur and a hilarious mirror to the guy in the white house at the moment which keeps things really entertaining.

Gadot and Pine are as charming as they were the first time around with the fish out of water now switching to Pine’s character. He is charming as the clueless wide-eyed wanderer in a new era. While Pine’s screen time is not as large as the previous instalment, Jenkins gets the most bang for her buck with Pine. The real star of the film of course is Gadot. Her evolution as Diana Prince over the last 4 films is really noticeable here. Through all of her pain and loss she is still able to exubirate love,light and positivity which is something that we can all use a dose of right now after this year. This movie blasts that love from the screen for every second of its runtime, with the majority of it coming from Gadot’s flawless performance.

A major criticism of the first film was the the ending CGI fight that according to critics ruined the film. WB seem to have taken this feedback on board and there is no massive CGI clash with a boss as a third act. While the film is very action heavy, minimising this really helped showcase the emotional arc of each character (including the villains) and the pending destruction of the world caused by humanity’s greed prevails.

Wonder Woman 84 has many secrets and surprises that I would never dream of ruining. Fans of the comic books and the TV series will revel in the easter eggs and reveals that they have been tight lipped about for the last few years. Jenkins has a complete mastery on this character and a clear vision of the trilogy (and spin off Amazons film) that are sure to be headed our way in the next few years. Wonder Woman 84 is a great bookend to a fantastic year for DC female films in 2020 following the great Birds of Prey at the start of the year. Gadot and Pine play well with Wiig and Pascal delivering solid performances and a ton of heart.