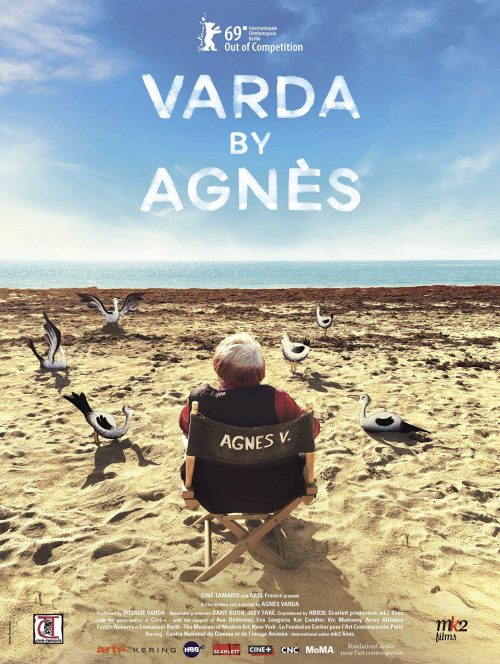 Unfamiliar with Agnès Varda‘s work, this autobiographical and auto-critical work was a very welcoming entry into this charming artist’s filmography. She uses footage from different events she attended and various clips that look back at her remarkable life and career. If she wouldn’t have passed away recently, this wouldn’t have been the director’s final film. Seeing her driven by everything that touches her and inspired by even the most plain objects, makes me believe she had so much more to show us.

Varda tells us about her fear of turning 80, and her visualising that number as a train heading towards her, not able to stop it. After turning 90 years old, she can’t stop laughing at that panic. When her eyesight problems got resolved, she decided to make Oscar-nominated documentary Faces Places with photographer JR. But not all of her films were a success and she mentions earlier box office flop One Hundred and One Nights starring Robert De Niro, for which he filmed his scenes in one day while he recites his phonetically learned French lines. That misfire never really bothered her and she always kept moving forward and doing her own thing.

Looking back at older works of Varda, we also get some former cast members sitting down and discussing their collaborations with the iconic director and how they felt on set. Her in 1985 released film Vagabond, starred the then 17-year-old Sandrine Bonnaire, who remembers how rude Agnès was on location, when she showed the director the blisters on her hand because of her method-acting while playing a homeless traveler. To which Varda admits “I should have licked them!”. They have nothing but praise for each other, while sitting cosy under a blanket on a camera dolly.

Watching this history piece on Varda’s filmography and earlier career as a photographer, I can’t feel anything but respect. When she tries to explain her love for doco-realism – supported by clips of her film Cleo from 5 to 7, where we see pedestrians reacting to her imaginary character walking through the streets of Paris – I can’t believe I’ve never seen any of her previous work. It just shows, there’s still so much to be discovered and there’s talent out there that has a personal view on the world that could add an extra layer on mixing everyday life with dreams.

Her energy is laid back yet dynamic, while there’s a certain calmness to her perception on life. She’s not this old lady, she’s that old lady that doesn’t seem to age – as if she’s lived multiple lives before and just knows how to deal with an ever-changing world. Normal situations seem to change into magical fantasy worlds in her hands. After watching Varda by Agnès, I for sure can’t wait to check out the rest of her oeuvre.