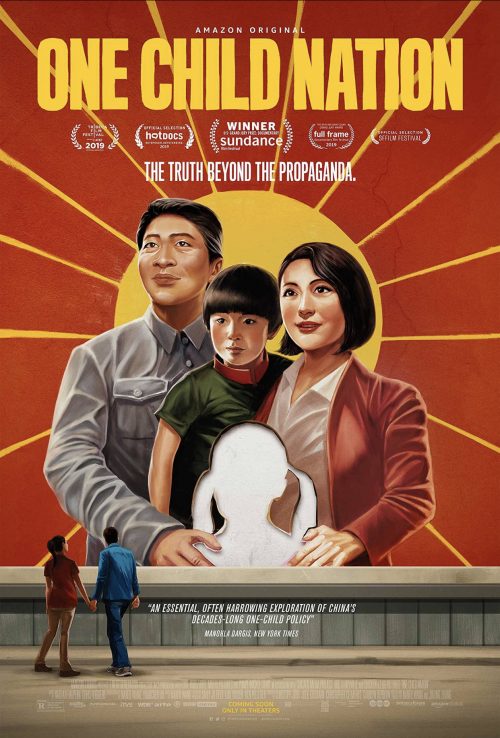 After winning Sundance‘s top doc prize earlier this year, One Child Nation is ready to take over Sydney Film Festival. Chinese leader Xiaoping tried to reverse the country’s population crisis with a one-child policy. Simple and logical as it seems and most of the Chinese citizens convinced by the government’s propaganda campaign, everything went according to plan and without any real protest…

Chinese born co-directors Nanfu Wang and Jialing Zhang document the impact of the One-Child Policy over its 35-year span – including its appalling consequences, which is straight up a human rights injustice. The film challenges its widespread assumptions about the population-control strategy from the film’s opening images, of an aborted foetus in formaldehyde, to a scene where we see a room covered in newspaper clippings for thousands of infants that went missing.

To be quite honest, I knew little to nothing about this “One-Child Policy” except for the fact that couples were just allowed to have one child. So the horror I witnessed watching this, was anything I could’ve prepared myself for, which makes this documentary even more important. I’m certain that the majority of the modern world had no idea what exactly happened in China: laws that called for the systemic sterilisation of mothers, full-term abortion of unsanctioned pregnancies, and forced adoption of children born in violation of the rule. This might seem extreme to some of you, but this personal yet shocking insight view of the outrageous events during the late ’70s and early ’80s shows just how many were affected by this population control strategy. And Wang’s family back in China is the perfect mirror to put us in the middle of all of it.

We get introduced to Wang’s younger brother – who was born exactly 5 years after Nanfu. This was only possible in some less populated rural communities, but was definitely not the norm. If her brother was born a girl, this story would’ve gone in a totally different direction. Local midwife, Huaru Yuan, reveals that she performed sterilisations and abortions (even forcibly without consent) on more than 50,000 women. She’s always tried to “restore” from her sins, by treating patients with infertility.

While Yuan is full of remorse, a family-planning official called Shuqin Jiang is not. She became a national treasure after appearing in commercials and talkshows, while being on the forefront of the mass abortions happening all over the country. Her communist ideology became very clear when stating she “had to put the national interest above my personal feelings”. Many thought they were fighting a population war, but can you rectify all of the pain and trauma that was caused?

Artist Peng Wang has dedicated his art to reminding the public of the many abandoned babies. His interview is one of the more explicit segments in this doco. Aborted foetuses became the subject of his work, after he photographed one by accident on a dumping site, thrown away as Tuesday’s garbage. A shocking but eye-opening revelation that works as a turning point halfway through One Child Nation. Soon after, Nanfu Wang discovers that her uncle also abandoned a baby girl shortly after her birth.

“We had no choice” is the most common sentence heard from every corner of China. Citizens still wondering decades later what exactly happened to abandoned- and taken away children. This leads Wang back to the USA, where she’s been living for years now. Research China activist Brian Stuy and Long Lan Stuy, who adopted three Chinese children, have opened an investigation on traffickers who collected unwanted babies and sold them to local orphanages. The Stuy-family has been fighting to help identify Chinese orphans and reconnect them with their lost families. This final act also explains how a lot of twins got separated because of the One-Child Policy. It leaves an emotional impact on you before rolling the credits. Journalists still discover hidden secrets of the wrongdoings of the Chinese government, up to this day.

One Child Nation is intimate and confronts audiences with a policy that might be considered by other governments in a time of overpopulation. This should serve as a lesson on “how not to repeat history”.