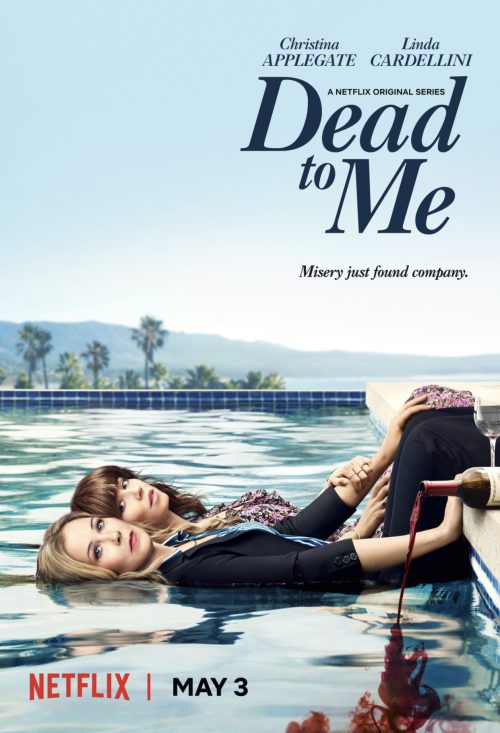 Dead To Me follows two women who tragically lose someone in their lives. This Netflix Original Series is very mysterious and the comedy is dark as the night. The first episode sets up the vibe for the rest of the show and it only pulls you in more and more, up to the point of no return.

The two leads – Christina Applegate and Linda Cardellini – have wonderful chemistry. Their interactions and the moments of sorrow feel like as if they are best friends in real life and just connect in the most sincere and natural way. The acting is also just sublime and shows once again that these ladies don’t get enough high profile acting jobs in Hollywood, which is a shame.
The subject of the series is not an easy one to handle and to combine it with comedy is very risky, but it really works here.

The episodes are easily bingeable with a runtime around 30 minutes and every episode has several situations our characters get in, that’ll keep you interested while you watch it all unfold. Every episode also ends on a cliffhanger that made my jaw drop, over and over again – which I’m a sucker for.

The show starts with Jen (Applegate) losing her husband in a hit-and-run accident. She’s obviously having many problems and trying to deal with the fact she’s a widow and single mother now, trying to raise her two teenage sons. She decides to join a meeting for those who lost loved ones and it’s here we get to meet Judy (Cardellini). Both totally opposite personalities, but still connecting in a way they didn’t think was possible. The pacing of every scene and episode is enjoyable and kept me engaged throughout.  It’s fun to see things progressing not knowing what will happen next.

The events slowly come together as a cohesive whole and we meet several key witnesses and side characters that help our leads develop into different personalities, without losing the characteristics we love them for. This build up could escalate in unseen proportions and who knows what might happen to the people closest to them.

The ending gets wrapped up really well and it does set up a potential follow up, but it could work as a standalone season. Dead To Me Season 1 is a tale of sorrow and mystery, the latter intriguing its interested audience the most. Don’t think you’ve seen it all after the big twist gets revealed at the end of the first episode. More secrets arise, which cause lots of banter and drama. In my opinion the writers could’ve made it all even darker with the comedy-aspect and certain intense situations. Who knows what a second season might bring.. Although I think it would be a waste to see these characters disappear, since they are so much fun to spend time with on an evening after work, with a glass of wine in your hand. Cheers!

Dead To Me will be available to stream on Netflix from Friday May 3th.