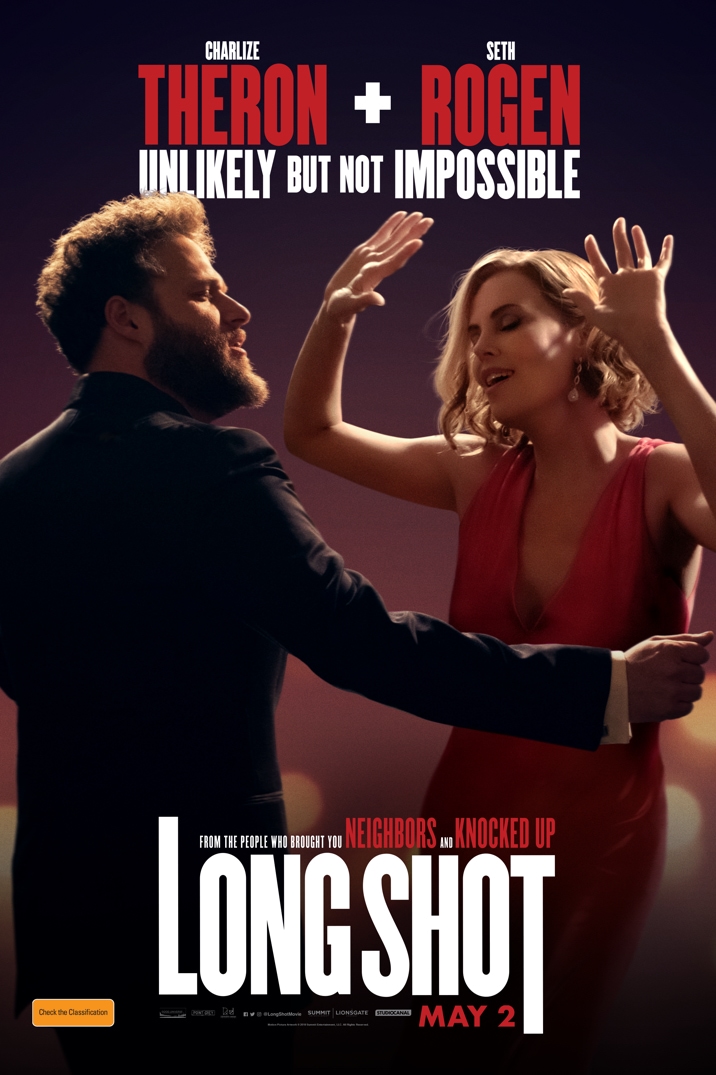 Seth Rogen and Charlize Theron team up for a political comedy that on paper sounds dull and predictable. Fortunately this is far from reality with Long Shot offering incredible chemistry between Rogen and Theron, a great story and believable romance and a fish out of water story that reverse the gender norms delivering a satisfying and entertaining rom com that is perfect date night material.

Fred (Rogen) is your idyllic artsy writer who is struggling in the corporate world. He quits his job from him tyrannical and hilarious boss Parker Wembley (Andy Serkis) who after purchasing his magazine has a different idea on how it should run. Fred is commiserating with his friend Lance (O’Shea Jackson Jnr) at a benefit when he runs into his ex babysitter and lifetime crush Charlotte (Theron). She is running her campaign for President and invites Fred to be her spreech writer as she struggles to navigate the world of politics taking him along for the ride.

As their relationship begins to blossom, Fred contributes more to policy changes and decision making as the two hilariously discover how different they are. Whole they juggle their professional and personal relationship as they are discovering and exploring them, the director Jonathon Levine allows for this movie to add a layer of depth and for the two leads to showcase just how funny and entertaining they are.

It is also worth noting that screenwriters Liz Hannah and Dan Sterling do their best to steer the story away from feeling too much like Veep and other similar political media satire that is out there. All of these factors contribute to one of the best rom coms I have seen in the last few years. At a running time of 120 minutes it does sound long for a movie of this genre, but it definitely doesn’t feel that way and never outstays its welcome.

Apart from the films performances, the themes of where the world is politically is also explored expertly through satire. Some of the events seem really out there but upon reflection of the current state of things (particularly in the U.S. climate!) it feels way too real and only improves upon reflection after the movie is over.

Rogen has always been fantastic at comedy and while some of his recent roles have felt a little samey, Long Shot showcases just why we fell in love with him in Knocked Up all those years ago. The same can be said for Theron who absolutely owns this, every time she is on screen she steals the scene and her chemistry with Rogen is perfect.

Long Shot is a movie worth seeing, it has so much comedy, heart and a great cast both lead and supporting to carry it through. Rogen and Theron are the perfect lead to carry this story that feels a little tropey at times but then completely flips it on its head and does the opposite of what you think. It is safe to say that I plan to watch this multiple times, I had so much unexpected fun with this movie and I really think it is one of the best rom coms in recent years.