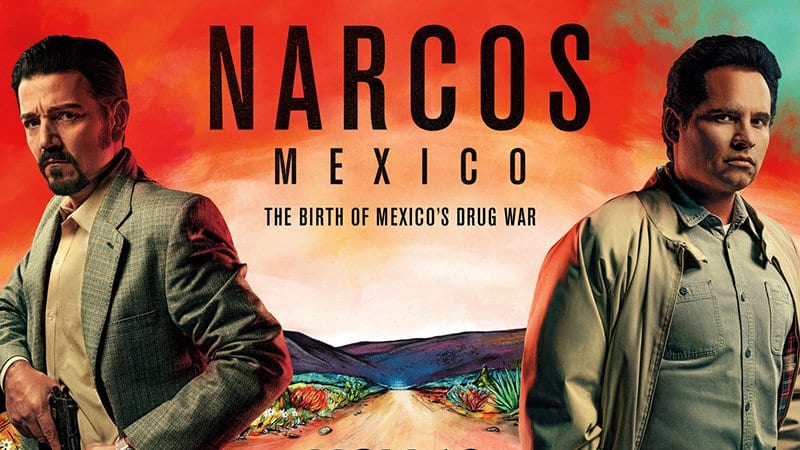 After the gruelling and intense finale of Narcos: Mexico opening season, season 2 captivates by playing strongly on the brutality of the drug war whilst also finding different ways to portray the players in the game as more than just ‘good guys’ and ‘bad guys’.

The tale continues with Walt Breslin (played by Scoot McNairy, the show’s narrator who was introduced as a special agent to the audience in the final scene of the previous season) and his crew, who are extremely angered by fellow DEA agent Kiki Camerena’s death and are now out for blood, lots of blood. After receiving permission from the US government to covertly go after the cartel for this crime, we get side A of the Narcos’ mixtape.

On side B we have Felix Gallardo (Diego Luna), the ex-cop turned marijuana kingpin, who by the end of season 1 was watching his empire fall around him driving him to make the decision to kidnap and torture Kiki Camerena, spiralling into the events of this highly anticipated new season!

The Narcos’ franchise is now in its fifth outing, and occasionally at this point in a TV series life, we can start hit stale patches. Narcos: Mexico seems to be aware of this, and while the formula this show goes for doesn’t change entirely in this entry (someone screws someone else over, someone gets killed in brutal fashion, rinse and repeat), this season’s strengths lie heavily in the portrayal of its characters.

There is a solid sense of moral uncertainty throughout season 2. The DEA agents, who we are meant to believe are attempting to end the drug war, are really more so out for revenge for the death of one of their own. At times, using the tactics of the same cartel they’re fighting in order to achieve this agenda. Scoot McNairy is a standout for this reason exactly. The brashness of Walt Breslin that he brings makes the audience understand the desire he has to bring his version of justice to those who have wronged him.

Felix Gallardo (Luna) spends his time working his way back to the top of the cartel game, this time during a people’s revolution in Mexico that threatens to remove those in power who have been protecting Gallardo all along. The show allows great insight into the government corruptions (i.e. rigging Mexico’s first 2 party election) and how instrumental it was in allowing the drug war to continue.

Right from the first episode, we are transported to all the ‘plazas’ throughout Mexico, taking us to fantastic location after location. The show’s style and cinematography are immersive and it’s style and aesthetic adds to the gritty and dark tones that comes with a drug underworld.

Narcos is well known for its brutal violence, and there are no exceptions this time around. In fact, it doubles down on showing the grim executions and torture. The other well-known staples of the show are sprinkled throughout, lots of sex and lots of drugs. The familiarity this season brings will surely keep already invested fans into the franchise happy.