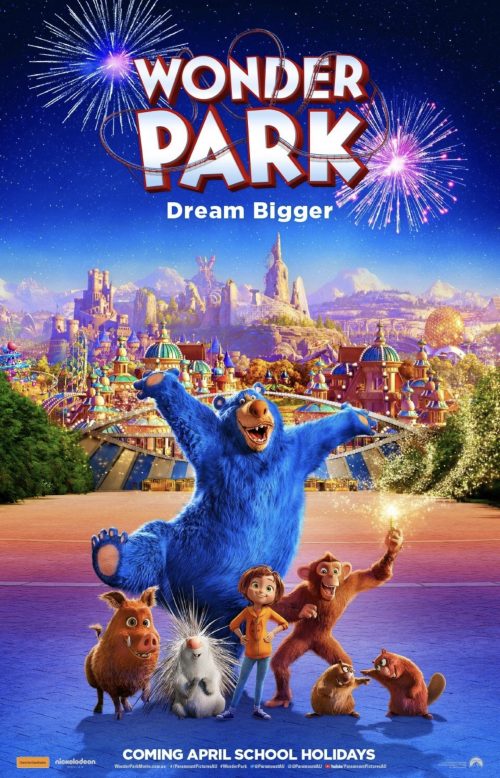 It becomes clear very early on in the story, that Wonder Park was gonna tackle some complex emotions. The trailer made me believe that this was your generic kids flick with talking animals and sweeter than cotton candy visuals. The latter wasn’t untrue, but there’s more than meets the eye. It mostly reminded me of my teenage years, building my own theme park in PC-game Rollercoaster Tycoon and trying not to kill the visitors by putting them in an unfinished ride.

Both storylines the film is trying to blend aren’t connecting with each other. It tries to go very deep in its more darker backstory, but the visuals that you experience on screen aren’t letting that darkness come forward and that’s where this movie misses the mark.

This was supposed to be animator Dylan Brown’s directorial debut, until he was fired by Paramount for inappropriate conduct during production. André Nemec, Robert Gordon and Josh Appelbaum collaborated on the screenplay that on the surface looks like a movie about a magical theme park operated by talking animals, but it finds its roots in a more serious family issue.

Wonderland was made up by June (Brianna Denski) and her mother (Jennifer Garner), who whisper their designs for the amusement park into the ear of stuffed chimpansee, Peanut. In Brianna’s imagination Peanut (Norbert Leo Butz) uses his magical marker to craft the unconventional attractions. But all the magic goes out of Wonderland when June’s mother has to leave home for a while to be treated for a serious illness. June doesn’t feel like playing with her friends anymore and also doesn’t find the energy or imagination to come up with new ideas for her Wonderland. Instead she develops some sort of OCD to make sure her father eats healthy and everything she does is “safe”.

After June leaves to go on math camp, she comes up with a plan to escape from the bus, after which she wanders into the woods and enters a magical portal into the theme park of her dreams. All of this is sort of a metaphor. June has to save Wonderland from complete darkness – which actually means she’s here to save herself.

In Wonderland she teams up with a group of animals that run the park: a bossy swine (Mila Kunis), clumsy porcupine (John Oliver) and a pair of beavers (Fitzy & Wippa) to save the park from “the darkness” (that comes in the form of a horde of cute but evil little stuffed zombie-monkeys) that has captured the creative genius that is Peanut. June quickly has to start believing in herself to be creative again, if she wants to beat this dark cloud surrounding Wonderland before it devours everything she once used to love.

Wonder Park is a very colourfully imaginative sugar rush of a film that sparkles all over the place. John Oliver, Jennifer Garner and Brianna Denski are the strongest of its voice cast, but the tone of the story is all over the place. A story with elements this heavy is more something you’d see from powerhouse animation studio Pixar, but I like that other animation studios are trying to spice things up. Just make sure the message comes across to your audience and don’t lose yourself in the “splendiferous” magic that’s surrounding all of it.

Wonder Park is playing in cinemas all across Australia.