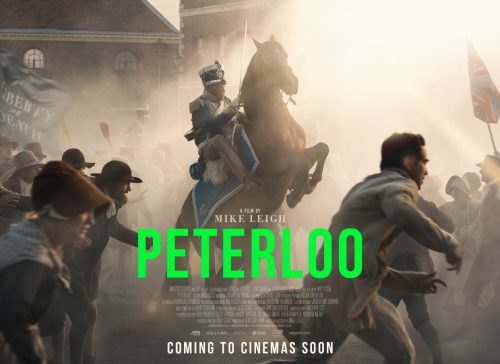 Mike Leigh‘s historical epic Peterloo, details the events that led to Manchester’s devastating 1819 Peterloo Massacre, which saw the British Tory government ordering a brutal military charge into a working-class crowd of peaceful pro-democracy protestors. It’s a well directed historical film that talks about the events which happened 200 years ago – yet at the same time lashes out at present-day politics.

This film is the result of hard work. Running for 154 minutes, dozens of characters and lots of conversations that all build up to its titular origin. Peterloo is an “experience“. Let me clarify: the slow-march toward the awful event is so exciting, that by the way the battle is staged, it all feels so real and even more aggressive. These victims didn’t see any of it coming and actions like this still happen up to this day. It’s interesting to see a seemingly more arthouse film with a serious subject, get promoted as if it was a commercial blockbuster. That makes me ask the question, if they couldn’t have turned it up a notch and make this into a blockbuster with more of a budget and still hold on to its script, to make everything even more epic and reach a wider audience.

The opening sequence puts Joseph (David Moorst), a soldier son of a mill-workers family who’s suffering from PTSD, in the spotlight. He’s covered in dirt and blood in the middle of Waterloo, where Britain just victoriously won the battle. We follow him on his way home, wearing his military redcoat that’s looking rougher by the minute. There’s not really a protagonist in this story, we get to see different point of views throughout the film, though most screen time is reserved for Joseph’s family. They basically stand for a community in the middle of revolution – infuriated by post-war poverty, Parliament’s refusal to extend the vote to the working class and import restrictions. Joseph’s father (Pearce Quigley) attends meetings with radicals, his mother Nellie (a magnificent Maxine Peake) remains her smug self, skeptical of change that will never happen anyway.

We soon see another point of view, with spies delivering reports from these radical-meetings to the powerful rich, angry, white men in black robes who love to sanction everyone and everything that doesn’t comply to their point of view on society. These magistrates appoint Sir John Byng (Alastair Mackenzie) as the Northern District commander because of his lack of political interest. These “gentlemen” conclude that upper-class orator Henry Hunt (Rory Kinnear) is their best chance to get some attention from higher-ups, but he is the one that plans a non-violent demonstration on St. Peter’s Field in Manchester, for his democratic followers.

Dick Pope channels 19th century paintings with his cinematography. Which is wonderful for some shots, but gets tiring when everything gets the same half-lit look. Performances by Peake and Kinnear are extraordinary and especially the latter stands out with multiple layers to his character, not afraid to take it to a next level of acting. Jon Gregory‘s exquisite editing skills, give us a clear look at the massacre, focusing on each victim and the violence that everybody had to endure.

Peterloo’s finale will outrage you and delivers on its buildup. This is still an arthouse film and the battle at St. Peter’s Field misses the grandeur of other historic epos, but it concentrates on the characters we met and respects these storylines like only writer and director Mike Leigh could’ve done. Peterloo isn’t perfect, but it is unexpected in every way and one stirring piece of filmmaking that you don’t want to miss.

Peterloo will play at select cinemas in major Australian cities this Thursday May 16.