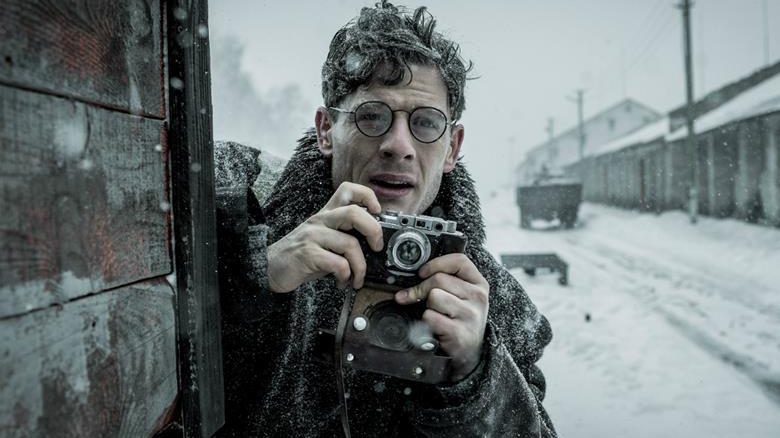 Mr Jones has some of the most stunning cinematography. Making this film almost a moving piece of art than a war-time film. It captures the world in its 1930s state, just before the war began. It also happens to give a visual journey at the same time as the story itself. Unique camera angles and magnificent shots. Not to mention the interesting use of VFX to move from scene to scene – down telephone wires or images materialising behind a puff of steam or smoke.

Riding on the fame of his interview with Adolf Hitler, British Journalist Gareth Jones goes on a diplomatic trip to the Soviet Union in the hope of interviewing Stalin. Relying on a contact he has previously used before; Jones quickly organises his journey to Moscow.

Word has made it to Jones that his contact has died in suspicious circumstances. Once Jones arrives in Moscow, he quickly comes to realise things aren’t quite as they appear.

Confined to Moscow and limited on any movements he can make; Jones starts to ask questions that very quickly put him on the radar of the people he doesn’t want to cross paths with.

After some smooth talking and an organised trip, Jones sneaks off to visit the Ukraine where he believes his contact had a story.

What Jones found was unimaginable. But while trying to survive his trip, the hardest part was convincing officials and the media back on British soil.

The second downfall is in the overload, almost showing off, with the execution of the story line. First, it’s the story of the journalist Gareth Jones. Then it’s the backstory and narration of the famous George Orwell novel, Animal Farm. While the two-go hand in hand, there is already so much story and visual information from Jones’ story. It isn’t necessary to have Orwell narrate the flow of the story line.

The visual story that accompanies Mr Jones gives it a wonderful yet bleak historical summary – a time a lot still refuse to talk about. Not only is the cinematography amazing the set and location truly make the visual aspect of the film remarkable.

Mr Jones comes with a rather well-equipped cast to give justice to the story. Leading as Gareth Jones is James Norton (Flatliners, Black Mirror, War and Peace). The journey Norton’s character went on is one only few performers would be able to handle. Norton manages to not only put himself into these horrific scenes but also give the internal journey his character would be going through as well.

Overall, Mr Jones does tend to go a bit too slow in some scenes and sometimes feel like there is too much information to take on board. But with the amazing cinematography and outstanding performances the story makes for a horrible and bleak yet wonderful history lesson.