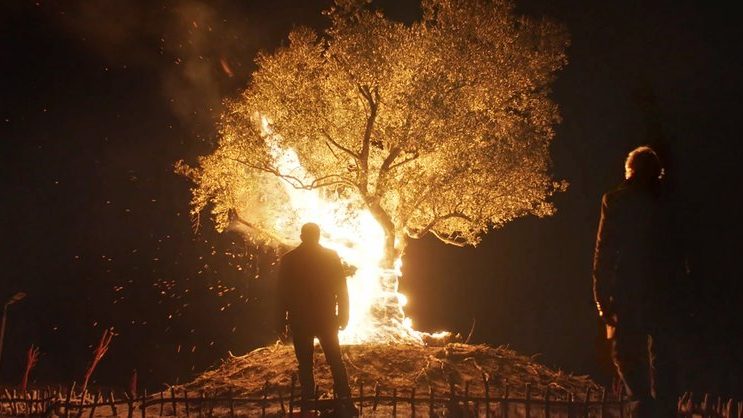 On the outside the Turkish film, Noah Land is a simple story about a man’s quest to get what is rightfully his. But as the story progresses it becomes a great deal more. It’s about the complicated father-son relationship. It’s about personal growth and self-discovery. It’s about family values. It’s about pride. And all this is about the love of the land.

When Ibrahim is diagnosed with terminal cancer, he asks his son Omer to take him to his childhood home. His wish is to be buried under a tree he planted when he was a child.

Once they arrive, they discover the tree Ibrahim planted is now a holy site. Believed to be the first tree planted after the flood by Noah himself.

In an attempt to claim back the land where the tree is planted the family that once drove Ibrahim and his family away from the village make the attempt near impossible. With deeds being destroyed and no one wanting to talk, Ibrahim and Omer are once again forced out of the village.

Noah Land is one of those unique films that doesn’t need to offer very much visually. The performances are beyond what a great setting or colour palette could do.

Ibrahim played by Haluk Bilginer manages to capture a rather unique vulnerability yet at the same time this strong driven individual. Alongside Bilginer is Ali Atay who plays his Son Omer. Bilginer brings a wealth of emotion to his character. So much so the viewer can see and feel exactly where his head is at without understanding the language.

The onscreen chemistry between Bilginer and Omer is what make Noah Land an interesting journey for the viewer. As they sit in a car talking to each other or helping make a meal in the kitchen, the two mange to capture something real and very present in every scene.

Overall, Noah Land does tend to hold a little flat. There are parts of the film than tend to drag on and not add a great deal of value to the film such as the many trips back to the tree or the retaliation between the two families. It is also a rather bleak and sad film that isn’t full of a lot of hope or happy endings. All that aside, the performances which give it that bleak rollercoaster of emotions are what makes this film.