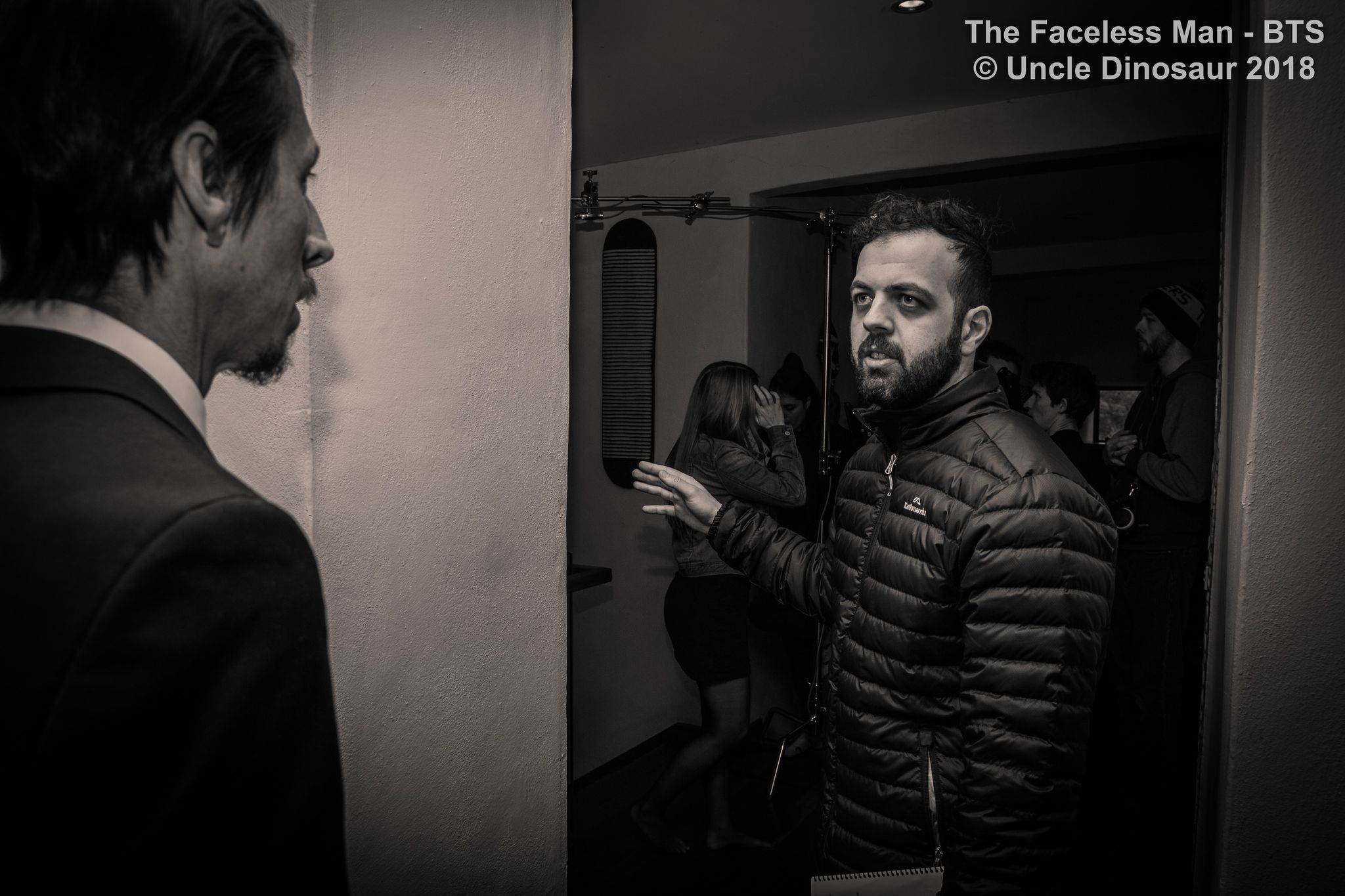 The Faceless Man is a brand new Aussie horror movie that is wowing audiences and is finally ready for release on VOD platforms. I loved the movie alot and can’t wait to be able to re-watch it at home during lockdown. We were fortunate enough to be able to remotely chat with the writer/director of the film James DiMartino. You can read the interview below.

+So I know you get this question ALL the time, who is The Faceless Man in your opinion?

While early script versions made it rather apparent, I decided to make it more metaphorical as I shot it as the mysterious nature was something that grew on the film and thus rather not give away my opinion. As I feel its not fair to people that have come up with their own. People have related it to cancer, to mental illness to Emily’s father (One big thing a lot of people miss is that Brendan Bacon who played the father to Emily also played the monster). I will say that a big part of the film was trying to convey cancer in a way that the fear of getting the disease again would be shown on screen.

A lot of mystery surrounds the supernatural creature, is it your intention to explore this in any future projects or are you happy leaving it open to interpretation?

The mystery factor of this film was needed. With a lot of sub plots as is an origin explanation of the creature would have been too much (and while there were attempts at this in early drafts I was never happy) I have also seen how it can also let down a film and in this situation the faceless man serves its purpose.  If I were ever to come back to this setting with a cool idea the faceless man should and almost always remain a mystery as like life somethings will always remain mysterious or open to interpretation. Art should be something people can take away and come to their own conclusions. Everything is in The Faceless Man for people to make their own interpretation from it and that is what encourages multiple viewings.

The casting in this film is incredible! Everyone really brings their A game, how was the casting process?

My Company Chapter 5 Studios did a really good job on helping me select the best people. I selected everyone I thought would suit the project well. I was lucky to get some recommendations along the way such as Sophie Thurling who came for an audition for Nina and cold read for Emily smashing it out of the park. Lucas Pittaway and Dave beamish were recommended by Julian Barbor, one of the co producers on the film. I head hunted Andy Mcphee and Roger Ward personally and was happy they wanted to be part of the project.

I think the crew also need praise as they worked around the clock. DOP and Camera crew lead by Rhys Sherring, head of Costume and Production design Inneke Smit. Legendary Armorer John Fox brought a heap of experience to the gun work and explosives. The postproduction musical score of Bart Walus and Sound design and mix by Benni Knop all provided a tremendous amount of passion for the project leading their department. The Producers Daniel Facciolo (Brad) and co Producer Julian Barbor worked around the clock to ensure the film would get done.

Balancing the horror/thriller elements and throwing in the good old Aussie humour is a really difficult thing to get right. How long did the script take to get to a workable point? Was there much improvisation on set from the actors once you were all there?

The script for The Faceless Man was very different than most would assume. It went through a number of re-writes until it was ready (A total of 17 from memory). It changed a lot once the cameras rolled and there was a bit of improv that led to some great comedy gold. The good thing was I had a lot of coverage to tweak performance and take out things. So its unfortunate that some comedy did need to get cut to keep the right tone for each scene.

The locations in this film are absolutely beautiful! Particularly the holiday house the group goes to. Whereabouts was this filmed? Did you essentially take over the town for filming?

Deb and Krispy the home owners where absolutely fantastic and supportive of the film. Deb ended up catering for everyone. They let us set dress the place how we wanted which included making a door that was to get shot full of holes. Or take over the laundry.

The WORKSHOP in the film was actually their barn that was set dressed which made it look like a basement.

The Locations in general were a big part for me. From the short films I did I learned a lot of valuable lessons on location shooting so I made it my mission to find the BEST locations I could to make this film.

That also meant finding a real hospital and filming in it. The Parkville hospital in Carlton is used on a number of big films such as Alien Covernet.

Hahahah. Barry, Eddie and Dougie where very creative and a driving force (as well as the faceless man) for me to pursue this script. I worked with Dan Reader on a number of my short films. He is VERY VERY good with Anger. Like I was very impressed from his role in “Congratulations” he played an angry aggressive boyfriend. When shooting The Immigration Game I came up with a character called Barry The C and told Dan about it. You could even say Barry was the first character I knew would be in this film. Dan Reader loved it so I had that locked in from the get go.

The idea that Barry was loved by everyone in the town as the guy that Fixes problems but his such a big man child that loses his shit at the drop of a hat. As we have seen.. But to also add some back ground trauma. There is a reason he is so against drugs as he states a very emotional scene (after doing something so evil we cant help but for a moment sympathize with him). His background comes from losing his family to drugs so its changed him and made him extremely psychotic.

Barrys dance which mimics Mr Blonde from Reservoir dogs is a reflection of Barry trying to cheer himself up after feeling down. He makes a sandwich (that almost looks like a subway commercial) all to the beat of “Edge of the sun” (which for some fun trivia was actually cut perfectly to “April Sun in Cuba” – They wanted like 18k for it and we couldn’t afford it..)

Speaking of great performances, that first scene with Sophie giving that amazing smack down serve to her Dad. How many takes was that done in ? What was the atmosphere on set during this scene?

That was possibly the hardest shot to get in the film. We had like 6 rehearsal sessions with Sophie and Brendan (Who was also very good). On the day with 100 extras we got the shot on take 7.
It was a test of mental and physical wit for Rhys who deserves credit where due for capturing a take that long and one that many would never have tried to attempt. Its also very fortunate that Sophie and Brendan did the best performance on that take with the best blocking.

Leading up to it, we didn’t know if Rhys had the stamina in his arms to do it so it was a make or break on take 7 and down to a bit of luck. But we got it and rejoiced. The Atmosphere was tense. So many things needed to work. Sophies Bald Cap, the placement of the extras, the blocking of the actors, Rhys placement, my placement to see performance. We only had the day to get that long take and some other hospital shots.

What’s next for you?

I am working on a series of scripts that are completed and seeking finance for after corona.
A meta film about film making that acts as a dark comedy coming of age story of what it means to be an artist. A dark comedy crime film that follows a series of interconnected stories that take place beneath a powerful crime syndicate. My most ambitious script is a George Orwell style dystopia set in 50 years’ time that looks at how the world could be. Through the eyes of three people.

You can rent and purchase The Faceless Man on VOD platforms now!

Like Loading...
Newsletter Signup
In this article:interview, james dimartino, movie interview, the faceless man interview
Up Next: