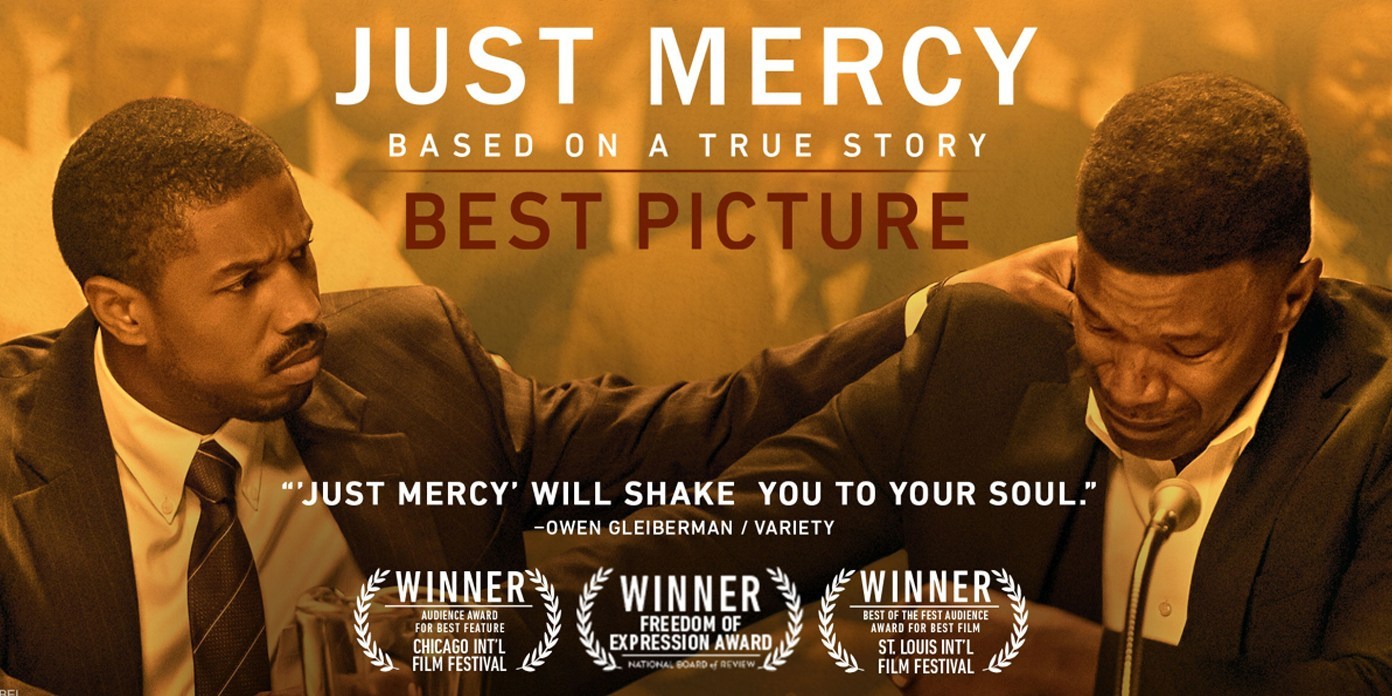 True stories and books are perfect fodder for movie adaptions, and with a lull in recent years Just Mercy brings the real life story of lawyer and activist Bryan Stevenson. This adaption has an incredible cast including Jamie Foxx, Michael B Jordan, Rob Morgan and Brie Larson. The story is based on the now infamous tale of a young lawyer who moves to Alabama to predominently help black prisoners who have been given the death penalty. The film has a fantastic story and some career defining performances from its principal cast including a return to form for Foxx who proves once again why he is one of the greatest actors of our time. With so much going on, the story could have easily collapsed under different guidance, fortunately director Destin Daniel Cretton steers the ship perfectly creating a memorable film that will stay with you.

The story of the film follows Bryan (Michael B. Jordan) who after an encounter as an intern, moved from his cushy lifestyle at Harvard to Alabama with a grant to create a firm with Eva (Brie Larson) to help cases that are on or about to be put on death row after misrepresentation from previous lawyers. The stories main focus is on Walter McMillan (Jamie Foxx) who has been wrongly accused of killing a woman in the local town. There is no actual evidence apart from a testimony from a convicted felon. The film follows Bryan’s journey to attempt to get Walter aka Jonny D off death row and out of prison. The local community have split on the issue and as Bryan and Eva go digging up the truth of the past, the debate heats up and the re-trial decides the fate of Jonny D.

The film features some incredible performances, Jordan really understands the character and his motivations. While he is played with a sense of wide-eyed wonder and optimism, as the story unfolds and the motivations and lies are exposed, Jordan shifts the character into a position of strength. Jamie Foxx’s depiction of broken man who feels completely helpless in the face of everything that has happened to him is well played. The character has a lot of walls to break down to start trusting Bryan and believe that anything can possibly turn around for him. Foxx is able to showcase the lighter notes on the performance and then ramp it up in the court room scenes. This is supplemented by a performance from Brie Larson who while is not in the film as much as the other actors, offers a nuanced performance that like the rest of the cast has been savagely overlooked at this years academy awards.

The cinematography from Brett Pawlak is incredible, panning from cityscapes to the country side of Alabama. As the story shifts from the courtroom to the town and Jonny D’s family, the greens of the town contrast against the grey of the prison.

While the majority of the film is fantastic, the story is solid and great performances, there are some serious pacing issues, particularly in the first half of the film. Some scenes do linger a bit too long and it does take a little bit longer than it should to get to the court room stuff that really peaks the interest of this story. Fortunately it is not a major thing and could be part of the reason it was overlooked this Oscar season.

Just Mercy is a soul shaking story that showcases the horror of this injustice. The fact that is happened so recently in our history is another reason why it resonates so well. In an era where mankind believes it has moved on from the sins of our past, Just Mercy is here to show that the road is far from over, and we still need to continue to fight for what is right.

Just Mercy is showing in cinemas from 23rd of January.

Review – The Conjuring : The Devil Made Me Do it