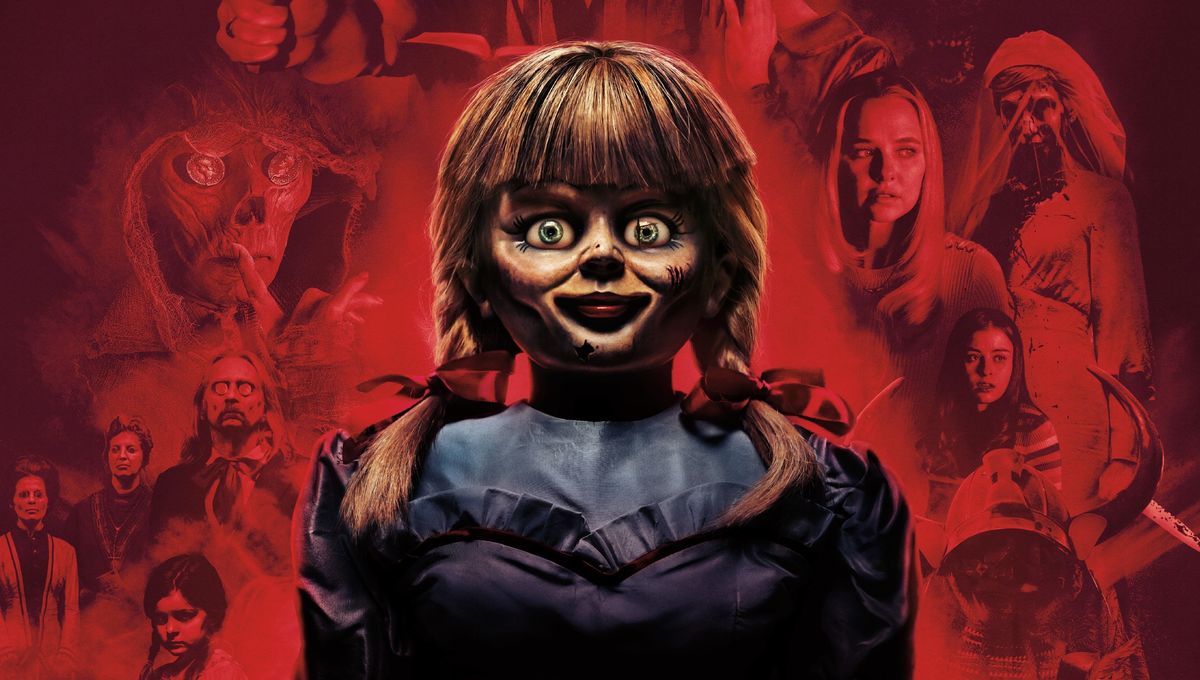 After 6 films in the horror Warrenverse what was expected to be an end for the Annabelle series comes as a spectacular send off to the spin off focused around the doll while opening up a ton of new potential evil things for many movies and years to come. ACH combines great performances from new and familiar faces with a familiar 90s esque horror feel that once it gets going, delivers the most fun the Warrenverse has dared to give us yet.

Set after the events of the first Conjuring film with Ed and Lorraine Warren (Patrick Wilson & Vera Farmiga) are on their way home with the doll Annabelle when they discover that she is a beacon for other spirits. After locking her in a glass case to contain the evil, Ed and Lorraine decide to take a trip leaving their tweenage daughter behind with two teenage babysitters in a haunted house of horrors when Annabelle is unleashed and activates the horrors inside the house.

The film follows the Warrens daughter Judy (McKenna Grace) and her babysitter Mary Ellen (Madison Iseman) as they are prepping for Judy’s birthday party. When Mary Ellen’s friend Daniella (Katie Sarife) crashes the party to investigate the Warren’s room full of horrors. When her curiosity gets the best of her she “accidentally” touches everything and Annabelle and a ton of other spirits and demons chase the three girls down attempting once again to give one of their souls to the demon that possesses Annabelle.

This time around there is a lot more humour than any other previous Conjuring film. Director Gary Dauberman is no stranger to horror after having written The Nun, Annabelle, Annabelle Creation, IT and now writing and directing Annabelle Comes Home. He manages to find a blend of comedy, heart and horror that doesn’t make too much use of the Warrens and focuses on the insanity of unleashing pandora’s box but can cleverly pull it all back when needed to bring the right tone to the scene without feeling jarring.

These films have a rich history of doing similar jump scares, bringing in deep bass in the audio while panning away to cut back to a change in the scene. Usually this is followed by someone screaming and running, fortunately Dauberman knows that these characters are seasoned in the occult, they know what to do to be safe and how to stop it all. It is one of the first horror films that doesn’t have completely clueless characters running around trying to survive. When these characters run up the stairs, they are equipped with a crucifix, they can’t escape outside because the spirits madness are also in a fog encompassing the house both front and back. It’s a refreshing change to a tired trope, particularly as this one does really herald back to a 90’s style film with the babysitter premise mixed with haunted house.

The film spends a lot of time setting things up, and not just the usual 20 minute setup before the scares, it takes a good near hour before all hell breaks loose. The good news is that it allows the characters to shine and the audience to connect with them. Even though this series is not known for any horror kills, you really do care about the three main girls and don’t want to see anything happen to them. The love interest character of Bob (Michael Cimino) has one of the funniest nicknames and is trying to pluck up the courage to ask Mary Ellen out on a date. While Bob has minimal screen time, Cimino does manage to get the most out of the material he is given and deliver a memorable performance.

Annabelle Comes Home feels like the final film centred around the now infamous doll. The story throws everything at the wall with a heap of other characters and evil spirits that could be sit to litter our cinema screens for years to come. The performances are outstanding from the entire cast with characters old and new all bringing their A game to this film. While the story is great it does drag a little bit in the first half, setting the characters and scares up to let the audience down before turning up the scares into overdrive at the end of the film. If this is the final farewell to Annabelle, it was a wild ride that should hopefully usher in a whole new set of horror films and spin offs around other characters. Rather than trying to live up to the original Conjuring film, Dauberman creates a lighter blend incorporating humour, horror and heart. After what has been an incredibly disappointing blockbuster season at the movies this year, Annabelle Comes Home is here to bring some sweet relief.

Annabelle Comes Home is in cinemas this Thursday.