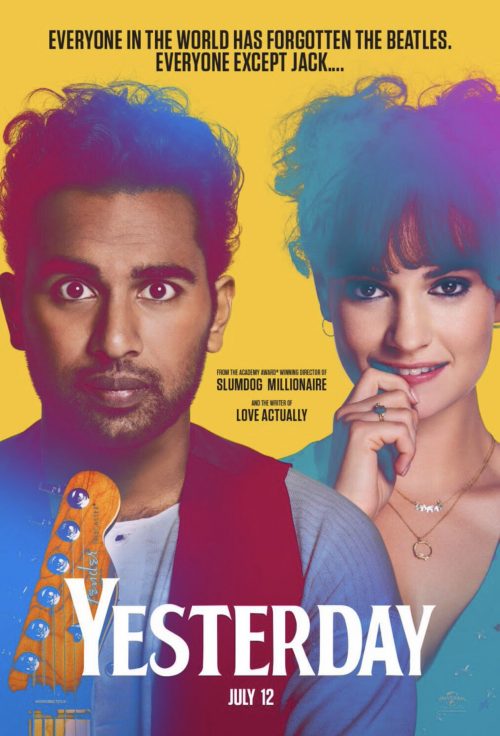 What if a global power outage caused you to get hit by a bus in the dark, and you wake up discovering there’s no sign of anything The Beatles have ever accomplished?

There was a time when Danny Boyle was a director who’s projects were considered edgy and each one of them had their own style. What if just like in Yesterday, he all of a sudden forgot about his previous work and decided to work with screenwriter Richard Curtis (Love, Actually) to make the most dull film we’ve ever seen of him? Well, that scenario doesn’t seem too crazy..

“Yesterday” stars Himesh Patel (Eastenders) and the usually very energetic Lily James (Mamma Mia: Here We Go Again) to play a struggling singer-songwriter and his manager/love interest – yet Patel’s character is completely clueless to the moves she makes.

Jack Malik (Patel) is ready to give up his dying career as a wannabe singer, when he gets knocked down by a bus in the middle of a global electricity outage. He wakes up in the hospital and soon finds out nobody has ever heard of the legendary band The Beatles (as well as some other brands/objects, which is clearly a perfect opportunity for the filmmakers to incorporate plenty of product placement.. Michael Bay would be proud.).

When Jack sees an opportunity to make bank, he knows just the way how to get people’s attention by writing down the lyrics of every song The Beatles have ever released – at least the ones he can remember. He claims to be the sole writer of these songs and after appearing on a morning show on local television, he gets discovered by Ed Sheeran and invited to accompany him on his upcoming world tour as the singer’s opening act. When Sheeran’s crazed agent Hannah (Kate McKinnon) approaches the rising superstar to sign him to her label, he has no idea where this rapidly progressing voyage will take him.

Not only will he discover how fame can blind you from what’s right in front of you, he will also learn the true meaning of the phrase “the grass isn’t always greener on the other side”. Girl-next-door Elly (James) was his rock from day one. Seeing her being pushed aside by his own greediness makes him realise what he’s really been missing in life: love. The film is supposed to be a very British romantic comedy with a highly original concept that leans towards fantasy, but its narrative is so “all over the place” that it feels like the end of the second act is the end of the film.

Yesterday could’ve been the sweet antidote in a world filled with sequels and blockbusters, but nothing is more unsatisfying than to see a well-accomplished director as Boyle screw it all up. The direction is all over the place with inter-titles and unbelievable scenes that won’t fly in the world we live in right now. It is too realistic to be set in a fantasy world and the film never pulls you in completely. Even the funny one liners and McKinnon’s delightful comedic punches as a stereotypical Hollywood agent, can’t save how ordinary “Yesterday” feels. And if you’re really here for the music, I have to disappoint you. The few music montages are not even worth the admission, since most of the performances get cut short. Just let it be.

Yesterday is out in Australian cinemas this Thursday.