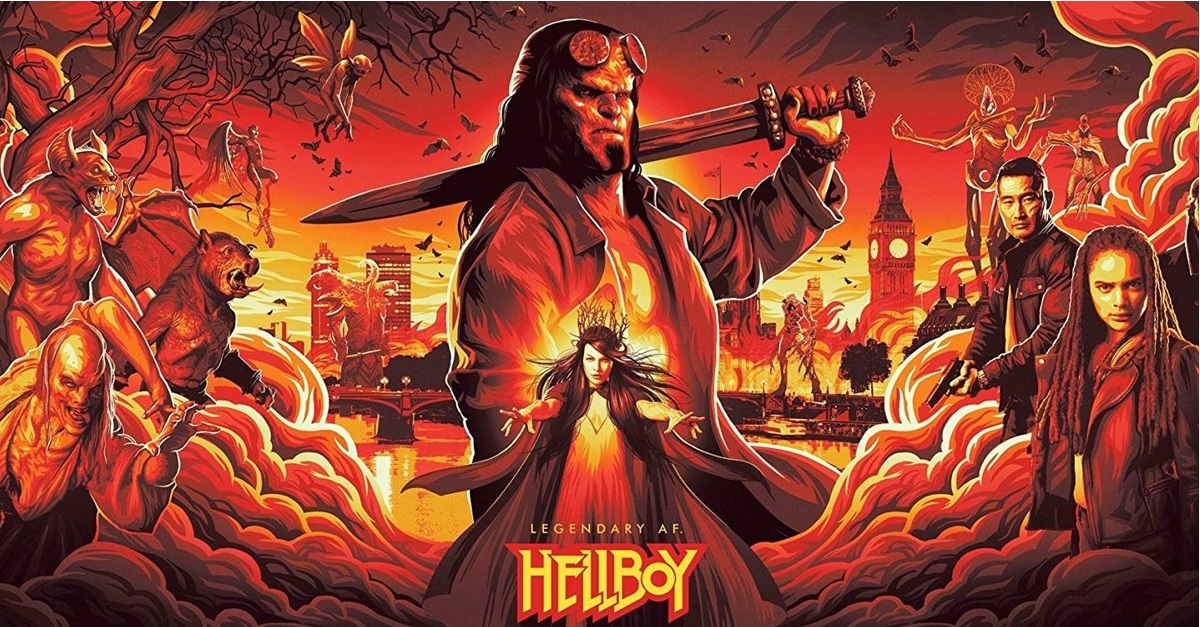 Back in 2004, acclaimed directer Guillermero Del Toro delivered the first Hellboy film. It was a blend of horror, action and comedy that garnered enough critical praise and box office to earn a sequel in 2008 called The Golden Army. Del Toro and the cast returned and broke sequelitis to deliver one of the best sequels of all time. Then news of a third movie was floating around and due to Del Toro’s rising popularity and the amount of time passed, he had moved onto other projects. Hellboy star Ron Perlman was asked to return to the titular role in the reboot but turned it down as Del Toro wasn’t involved in any way. So now after a long wait, we finally have Hellboy. The “not a sequel, not a reboot but yet it kind of is” film. I am relatively new to the comic lore of Hellboy and am still diving deep into Dark Horse’s library exploring the character. So enough about me, Hellboy is not what I expected, it feels like a big budget indie movie with a shoddy script, a myriad of pacing issues, beautiful creatures and special effects (both practical and CGI) and some truly woeful performances. Sorry folks, not even the unnecessary R rating can save this stinker.

The film follows Hellboy (David Harbour) who is working alongside his father Bruttenholm (Ian McShane) for the Bureau for Paranormal Research and Defence. When Hellboy is called to England by a reclusive mens only club to help deal with some giants, he encounters the Blood Queen (Mila Jovovich) who was murdered by King Arthur (yep that one sigh!) And his sword Excalibur. The Blood Queen’s body has been separated into parts and spread across England to make it impossible to put her back together again. Meanwhile a gargantuan boar creature Gruagach (Douglas Tait) a foul mouthed foe is trying to put the Queen back together to get revenge on Hellboy for making fun of him when he was younger (no, I’m not kidding and I really wish I was) Along the way Hellboy teams up with psychic extraordinaire Alice (Sasha Lane) and special agent turned Cheetah wannabe Ben Daimo.

I really wanted to like this movie, the lack of footage we had seen, combined with the embargo of morning of release didn’t fare well, I still went in open minded and was ready to fall in love with the man in red all over again. To some degree I did, Harbour has the character of Hellboy down to a tee. He has the swagger, the comedic timing and the acting chops to fully embody the character. Regrettably the rest of the cast are truly woeful. Lane and Daimo are often spouting exposition, while looking and dazed and confused, just waiting for their meatier parts later in the story. The backstory for Agent Ben is weird and feels only there to please the comic book fans who will riot if they don’t stay faithful. To be honest this whole film felt like that, like there was secret wink to the comic book lovers who know these characters and this lore while leaving the rest of us scratching our heads wondering what the hell is actually going on with this movie.

The story was not great, I am told it is based on three different story runs in the comic books and while this may work on the page, it hasn’t translated well to screen. It’s choppy and this is also reflected in the way the camera moves and location changes go zipping past the screen, there is one shot where the camera is hovering above the city and pans to the right and lingers for a few seconds for no reason, legit, I wish I was joking. This feels like they hired the same team who edited Suicide Squad but instead of pop music they swapped it for heavy metal.

The special effects fortunately are a different kettle of fish. They use a blend of practical and CGI which quite often blend together. Usually this can produce a mixed result, fortunately in this case it works beautifully. The practical effects on Hellboy and Baba Yaga are astounding and worth praising. The complete chaos of the apocalypse as it rains demons and a dragon riding Hellboy slaying millions of humans is truly breathtaking. It is just a shame this this much care and attention wasn’t given to the script or perhaps an acting coach for the supporting actors.

Hellboy is the first major disappointment for 2019, it had so much potential with a great cast, a studio that seemingly wanted the reboot and a hefty budget for great looking effects. Regrettably the only people who will probably enjoy this are fans of the comic books themselves as they will be in on the lore and the endless winks and nods it gives. While the special effects and Harbour’s performance are the highlights, it is not enough to save this movie from getting completely lost in the chaos that is is (and is about to be) at the box office with the likes of Shazam, Captain Marvel, Pet Sematary and a little film called End Game which starts in 2 weeks. Hopefully it will make enough to recoup its budget and maybe give us a sequel worth talking about, just like The Golden Army.