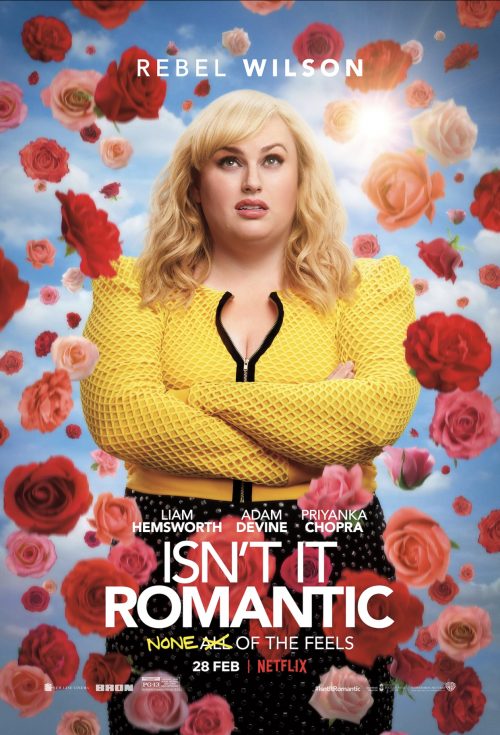 Rebel Wilson is the star in this romantic comedy that wants to make it very clear to you that rom-coms are dumb. But not really..

The movie opens with a young Natalie being advised by her boxed wine-drinking mother (an underutilized Jennifer Saunders) that the best she can ever hope for is that someone might want to marry her for a visa. 20-ish years later, Natalie is an architect living in her tiny, sad New York apartment with her dog. After another disappointing day at work, where a wealthy client (Liam Hemsworth) thinks that she’s just there to bring him a coffee, she gets assaulted by a stranger on the subway who tries to steal her purse. But when Natalie fights back and ends up smacking her head against a metal pole, she wakes up in the hospital – but something doesn’t seem right… Her doctor is McDreamy 2.0, the street outside is way too colourful and “New York doesn’t smell like shit anymore.” When yesterday’s client suddenly pulls up in a limo and asks her out on a date, she soon realises she’s stuck inside a kids-friendly romantic comedy – musical numbers incl.

The all-female writing team behind Isn’t It Romantic – Erin Cardillo, Katie Silberman and Dana Fox who’ve worked on films such as Set It Up and The Wedding Date – know exactly who their audience is by pulling the stops on everything cliché and then dismissing them with one-liners and the witty acting of Rebel Wilson, who is better than we’ve ever seen her in anything else before. The script also comments on the clichés that are being used, subjects such as gay stereotypes and Natalie’s weight aren’t taboo in this smart comedy.

Other female castmembers include Priyanka Chopra as self-proclaimed “yoga ambassador” and GLOW‘s Betty Gilpin as the shy colleague. They don’t really get a lot of screen time or character development – unless in their alternative romcom-universe – but that might’ve been intentional.

The ending is the cheesiest thing you’ll probably see all year, but you kinda know what you’re in for, when choosing this film on Netflix. Isn’t It Romantic isn’t for the truly hardened cynic, who’ll gladly pick apart every single detail. But optimists will definitely catch themselves smiling at the clever details and nods to older romcoms.

Isn’t It Romantic is now available to stream on Netflix in Australia.