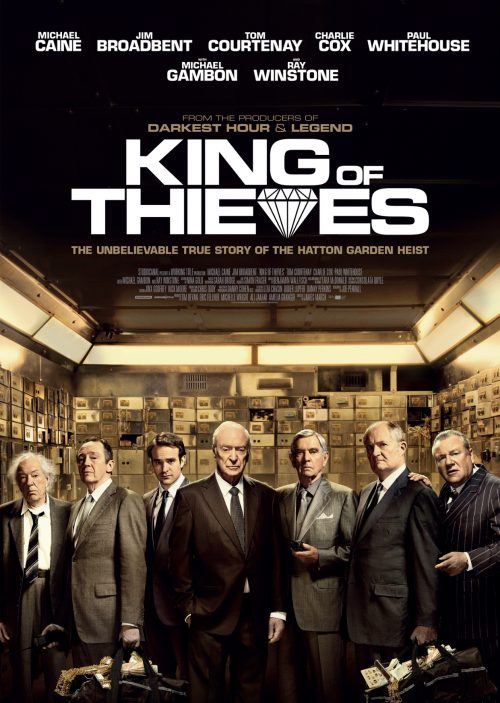 In 2015, a gang of pensioners broke into Hatton Garden Safe Deposit in central London, a heavily fortified vault used by the local diamond dealers to store their valuables. Their massive catch was worth a staggering 14 million British pounds and it made headlines all over the world. It is the biggest heist in British history.

The cast is led by Michael Caine and his native cockney accent. Caine plays Brian Reader, a London thief who made a promise to his late wife that he would stay out of trouble after her death. But after meeting young computer expert Basil (Daredevil himself – Charlie Cox), he finally gets the opportunity to realize one of his dreams by emptying all the deposit boxes kept in Hatton Garden.

The film turns a bit darker in its second half when old rivalries arise and back-stabbing becomes the main focus. In the meantime, the police force identifies the crooks almost immediately and everything starts to blow up into our old gang’s faces.

The film relies too hard on its well known cast to attract audiences, but somehow these actors don’t work well together on screen. It’s nice to see Mr. Caine in a lead role at his age, but some of his supporting castmembers just seem miscast and come across unbelievable. There’s no character development or background, most of them don’t seem to have a private life or family.

King of Thieves really should have been more interesting than it actually is. It felt like a chore to watch this film, directed by Oscar-winner James Marsh (The Theory of Everything). Joe Penhall‘s (Mindhunter) screenplay makes grumpy old men throw around F-bombs and homophobic insults at each other like there’s no tomorrow. The jokes don’t land and nothing feels suspenseful whatsoever. The true story falls flat when the tone of the story doesn’t connect with its genre and performances. The director tried to make this into some kind of a tribute with flashbacks/snippets to some older heist movies this gang of British legends were in, such as The Italian Job, Scum and Billy Liar. But it just seems like they’re trying too hard to make this into something it’s not.

King of Thieves could’ve worked with a rewrite and a different director. In the hands or Marsh and his docudrama style, it didn’t.

King of Thieves is playing in Australian cinemas now.