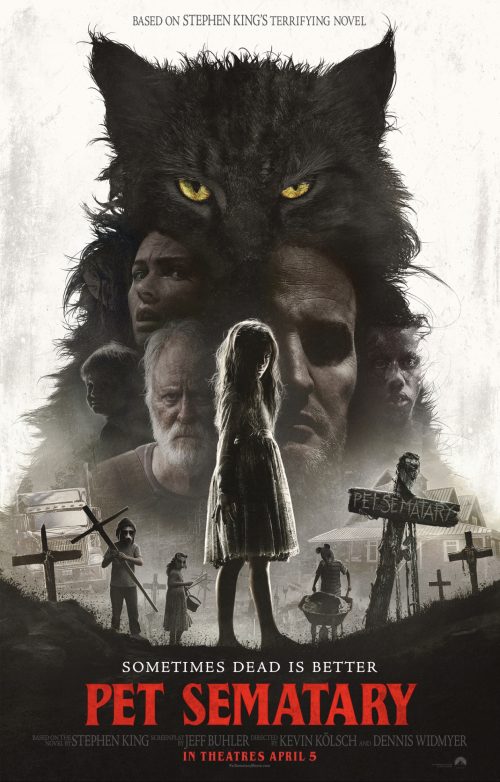 Sometimes dead is better – but this Stephen King novel got buried and came back to the big screen with a f*cking attitude!

Director-duo Kevin Kölsch and Dennis Widmyer made a darker than the night Pet Sematary adaptation, writer King can be proud of. The first half of the movie relies heavy on exploitation and cheap jump scares that more or less fail, but after that shocking incident halfway through the movie, you better buckle up and enjoy this ride into the depths of hell. After successful Stephen King adaptations It and Gerald’s Game, it seems we have another winner on our hands. Some hardcore fans of the novel might get upset with the switched narrative, but as one of those fans I thought there was more to it that made it worth my while.

The Creed family just moved to quiet little Ludlow, Maine as an escape from hectic Boston. Louis (Jason Clarke), Rachel (Amy Seimetz), daughter Ellie (Jeté Laurence) and son Gage (Hugo/Lucas Lavoie) are slowly adapting to their quiet country life, but find out their property comes with an eerie landmark – a “Pet Sematary”. Neighbour Jud Crandall (John Lithgow) warns that some places shouldn’t be discovered, but when Church the cat dies, and worse soon after – Louis dives into the power of his new inherited local urban myth to make things right… but nothing is what meets the eye.

Kölsch and Widmyer use Native American mysticism and menacing bogs to set the mood. While cinematographer Laurie Rose foreshadows “the incident” under dark tones contrasting the picket white fence happiness. The rest is up to the Creed clan having paranormal hallucinations and digging into muddy graves, to creep us out even more.

The directors aren’t afraid of using savage gory details, and this becomes clear very early into the movie when we see Victor (Obssa Ahmed) getting wheeled into Louis’ operating room. Flesh peeled back and brain pulsating as if they dragged him out of The Mangler (another Stephen King story). Blood spurts from open wounds and if that wasn’t enough, the climax will have many viewers flinching. The horror creeps through the cracks of the walls, slowly but surely it’ll get to you in some more emotional scenes and hit you without a warning.

Jeté Laurence gives a killer performance, whether she’s sitting in a bathtub or twirling around while the Nutcracker score plays, she’ll crawl under your skin nonetheless. Church the cat does some serious animal acting, better than the ginger cat we recently saw in a huge blockbuster – eat your heart out Goose.