Review : Spiderman - Into The Spiderverse 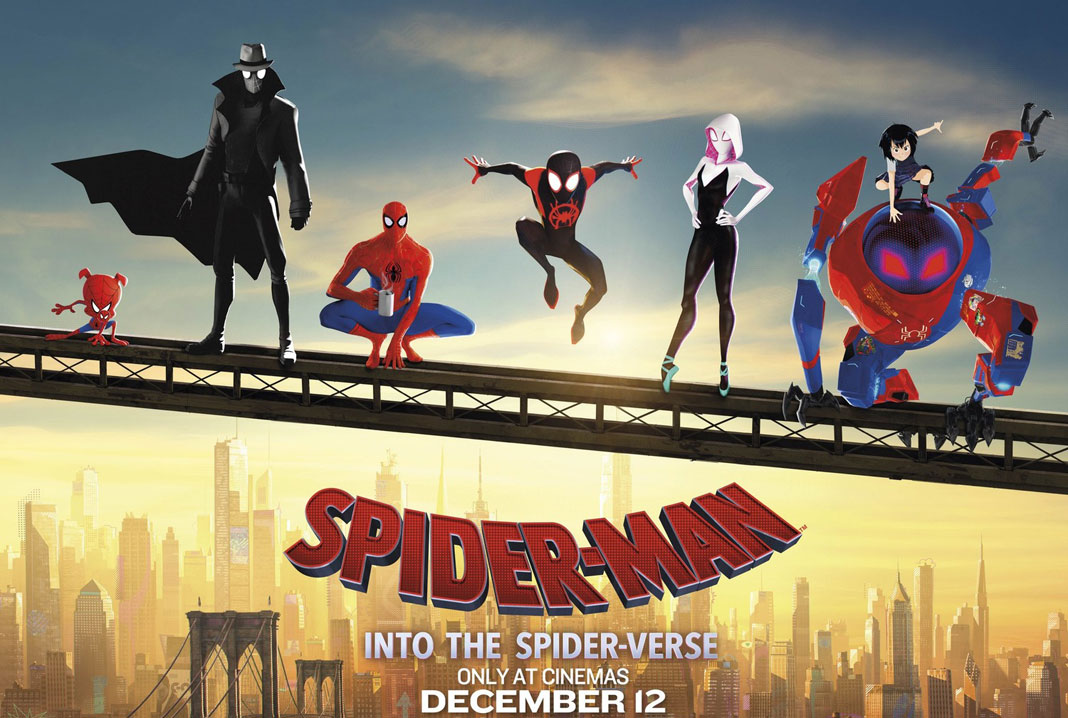 No-one asked for another Spiderman movie. We have had 3 different versions of the same story being retold in the last 15 years and with Spiderverse introducing Miles Moralis, have we officially hit Spidey saturation? Fortunately while introducing 6 (that’s right!) new Spider characters, Into the Spiderverse crafts a well woven story that never confuses the audience. By using a 3D animation comic book style it allows the movie to dive into the craziness of the world it has created. Delivering what I consider to be the best Spiderman story ever told on screen. Into the Spiderverse is Sony’s triumph with the Spiderman character and comics and should be a template for their Marvel films moving forward.

The story fiollows the character of Miles Moralis (Shameik Moore) who is unwittingly bitten by a radioactive spider that unlocks his Spidey abilities. At the same time Kingpin (Liev Shriber) has just opened up an interdimensional portal that is ripping the cityapart which brings in various different Spider characters from different dimensions. There’s Noir Spiderman (Nicholas Cage) a black and white Nazi punching hero, Spider Gwen (Haylee Stienfeld) who fortunately played a really big part in the story, There’s Spiderpig (YES! he really does exist) and two different versions of Peter Parker (both voiced by Jake Johnson). Together they must help train Miles to use and control his powers while returning to their timelines and defeating King Pin’s device.

The animation style is unlike anything you have seen before. It is a blend of 3D animation, with hand drawn comic book style and the most lush coluring palette used on a movie to date. This really does warrant going to see it in the biggest screen you can. Some of the best moments are the flashy action scenes that combine with traditional comic book written words being splashed in the background while the action ramps up in the foreground. It really is a beautiful mesh of classic and new styles that add to the overall atmosphere of this movie.

In addition the soundtrack and score are masterfully crafted here under the guidance of Daniel Pemberton with a blend of songs from the soundtrack and a sweeping score that leans into every Spidey swing and emotional punch that this movie delivers. The full soundtrack is expected to be released in the next 2 weeks so definitely look out for that. It also is a great reflection of what a teen like Miles Moralis would listen to with Nicki Minaj, Post Malone and Swar Lee all confirmed to have songs on there. The transition from Miles home in the Bronx to the upper East side is also shown beautifully through the score as the landscape changes, so does the score with it to great effect.

Let’s talk about the part that ripped my heart out, the Stan Lee cameo. First of all he is beautifully animated, like just beautiful. This is the first Marvel movie since his passing and I unashamedly shed quite a few tears in his extended scene in the film. It is so fitting that a Spiderman film was the first to come out after his death, Spiderman was Lee’s creation and his greatest love (apart from the Fantastic 4) It was such a beautiful moment in this film and even earned applause from my cinema audience who clearly loved Stan Lee as much as I did.

Juggling all of these characters as well as a mutliverse and grounded story about a family cannot be an easy thing. This movie has been in development since 2014 and I am so glad they took their time to get it right. Everything about this film feels very carefully thought out and comes across in the execution. Spiderman Into The Spiderverse has introduced us to all these characters who all get their time to shine and would happily watch in any sequels, spinoffs or future versions. It would also be remiss to say that Aunty May is voiced by Lilly Tomlin and is one of the highlights of the movie.

Spiderman Into The Spiderverse is a triumph, it delivers the best Spiderman story ever told on screen to date, while introducing us to a plethora of new Spider people that are all given just enough moments for you to want more. Miles Moralis is a fantastic version of the character and one that I hope we get to see explored more in cinema in the future. What’s more is this movie proves to the fanboy naysayers that Sony have a total understanding of who Spiderman is, they have a hold on the Spidey universe and I for one cannot wait to see where they go next. Spiderman Into The Spiderverse is the best Spiderman film ever made and a great addition to the holiday movie lineup.

Spiderman : Into The Spiderverse is in Australian cinemas December 13.