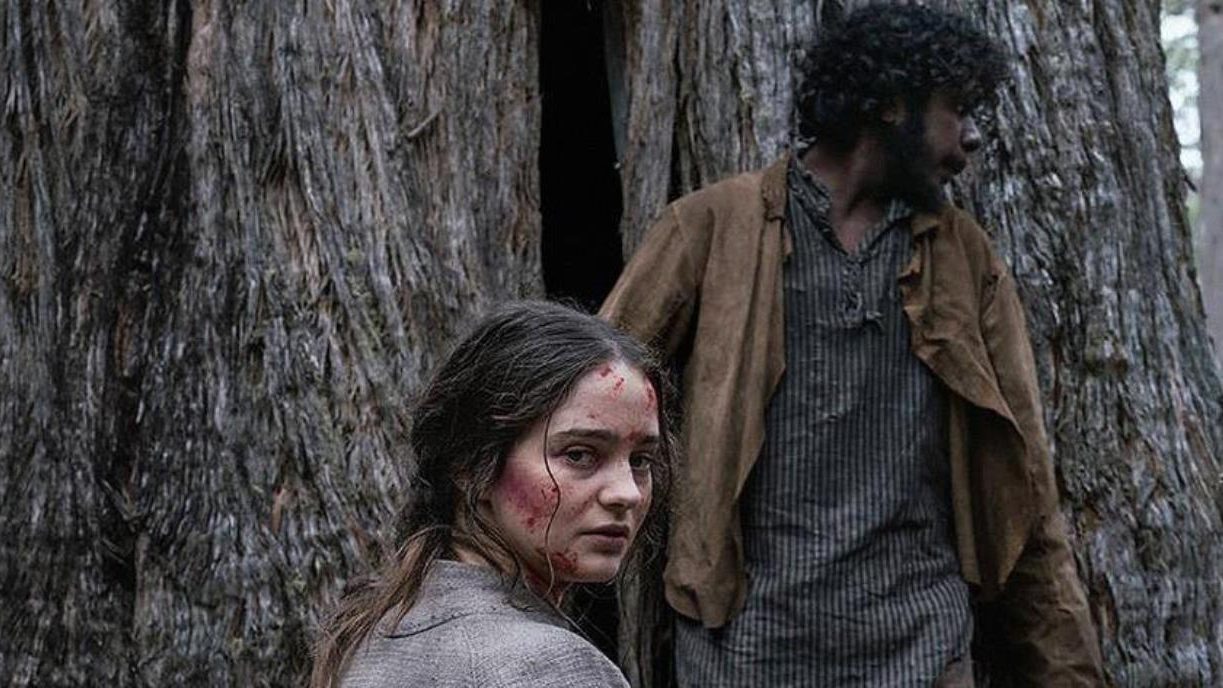 Director Jennifer Kent returns to horror after the worldwide success of The Babadook, this time around Kent takes us back to colonisation in Australia focusing on an Irish convict woman on a quest for revenge after a series of vile and shocking violent acts force her to embark on a cross country mission through the unknown Tasmanian rainforest (which is nowhere near as picturesque and romantic as it sounds). The film is designed to shock and stun and Kent delivers this for a solid two hours of unrelenting savagery set against a classic woman scorned revenge story.

The story is set in 1825 Tasmania and centres around Clare (Aisling Franciosci) an Irish convict who is currently serving her sentence under Lieutenant Hawkins (Sam Claflin) being forced to work in the kitchens during the day and be a server and singer at night for Hawkins and his men at the local pub. Clare has been working hard to earn her freedom with her husband and newborn baby. When a series of violent events change the lives of everyone involved, Clare sets out on a journey chasing Hawkins to Launceston. Along for the trip is Aboriginal guide Billy (Baykali Ganambarr) who is following Uncle Charlie (Charlie Jampijinpa Brown) leading Hawkins to Launceston to demand a promotion.

The story focuses a lot around vengeance and a blind fury fuelled by absolute rage and hatred which Kent cleverly gets the audience on board with early in the film. While some may find this really difficult to sit through with extreme violence towards women, rape scenes and a death so sickening and gut wrenching, the cinema was stunned into silence for several minutes. Some people who can’t handle this kind of violence in films may find it too much, on the other side of this, if it wasn’t so real and shocking, the journey Clare goes on wouldn’t feel justified. How she views the world and interacts with Billy is also reflected as they discover the more about each other, the more they are alike.

The films location in Tasmania is absolutely breathtaking. The dense rainforest with constant downpours and contracting rays of sun trickle in through the trees showcasing just how dangerous this place is without local knowledge. Ganambarr is the perfect fit for this role bringing to the screen the dialect of Palawa Kani, an Aboriginal language local to this area. There are also rituals and ceremonies from indigenous tribes that Clare is initially resistant to but an impossible situation forces it upon her. It is a beautiful display of indigenous Australian rituals on screen.

Kents direction is nothing short of brilliant. Combining the dark tones of the story and blending it with this beautiful and foreboding rainforest with potential danger at every turn. Seeing life through this lens of a scorned woman who has been dragged to this unknown country against her will and trying to make the best of it results in some interesting conversations with Billy as their relationship evolves after realising that although Clare’s ranking is only slightly higher than Billys. Kent also masters camera work as shots linger and switch between the victims and their assailants. In the hands of anyone else it could have failed miserably, fortunately Kent proves this is no difficult task and in her second outing as director shines above her peers.

The Nightingale is nothing short of a modern classic. It is so lovingly crafted and well thought out it is not only a standout in cinematic achievements for 2019, but for Australian cinema as well. Diving into the real history of our country and the colonisation and near extinction of traditional land owners is bold territory to dive into. Using local dialect against the Tasmanian rainforest with a cast of local and international talent pays off. There are tones of Kill Bill mixed with a spaghetti western chase that give the film an overall familiar feel, this is contrasted by the incredible performances from the entire cast with Franciosci and Ganambarr giving career defining performances. Jennifer Kent has written and directed an incredible film that captures a terrifying part of Australia’s history.

The Nightingale is showing in cinemas now.