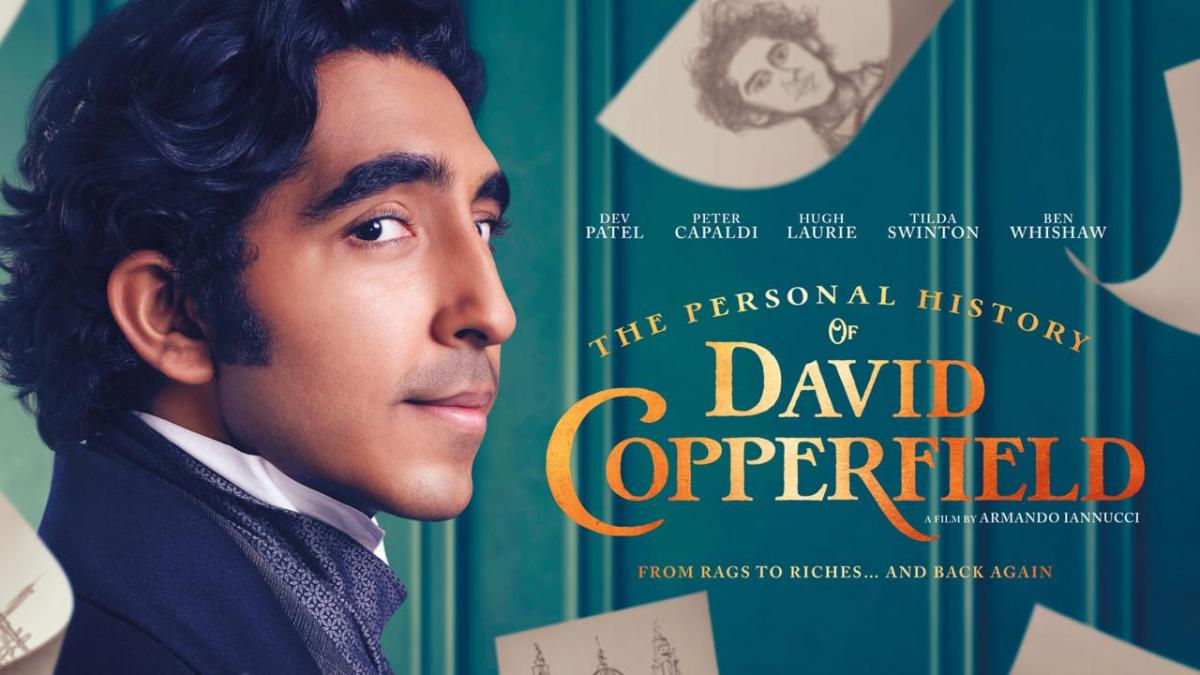 Disclaimer : The first real movie to take the hit from COVID-19 was The Personal History of David Copperfield, it is the last media screening that I attended and the last film I saw in theatres before restrictions hit so it is with a sense of nostalgia and affection that I write this review as it FINALLY gets its release date this week.

The Personal History of David Copperfield is based on the Charles Dickens semi-autobiographical story of the same name. This re-telling is directed by Armando Iannucci (The Death of Stalin) who has taken an inclusive approach to the casting that given the Victorian setting may surprise. The film is led by the incredibly talented Dev Patel (David Copperfield) with an astounding ensemble cast including Peter Calpadi (Mr Micawber), Hugh Laurie (Mr Dick) Benedict Wong (Mr Wickfield), Ben Whishaw (Uriah Heep) and Tilda Swinton (Betsey Trotwood).

Story wise, they do stick quite close to the novel. From the hysterical birth of David in which his mother, attentive housemaid and wealthy/snobby Aunt really establish the tone and wit for the film. To the then appearance of the step-father who takes a heavy hand with David and sends him away to work in his bottle factory in London under the supervision of Mr Micawber. From here Dickens learns about imagination from the impoverished family, one of my favourite scenes is the family sitting down to eat. Dickens is presented with a plate of meat, potatoes and cabbage leaves. The rest of the family have a couple of cabbage leaves as their dinner. Dickens offers to share his meal with the family and is left with the cabbage leaves that the rest of the family started with. It is this type of humour that permeates the film while also being able to reflect on the issues of classes, debt and wealth.

When Dickens moves on from the Micawber family to live with his aunt Betsey, he experiences the other end of the spectrum. Her extravagant and aristocratic lifestyle is an extreme opposite end of the spectrum and you can really feel that David is shaping how he sees the world and interacts with it based on his three experiences growing up. Betsey is extremely outlandish and Swinton plays her perfectly. This is perfectly balanced with Hugh Laurie’s lodger Mr Dick. The pair are incredibly electric on screen and nearly steal every scene they are in together…ok not nearly, they do.

The subject matter of the film exploring the class system, being able to put food on the table and what kind of food while also delving into some extremely dark subject matter of child abuse. There was one scene in which David’s step-father is being quite heavy handed and then traps him in a room to discipline him “like I would my horse of my dog” while David’s mum is restrained outside by the house staff. It is a sudden change of pace that is very effective. Iannucci has found the perfect balance between comedy and battling the darker themes so they don’t feel off balance.

The Personal History of David Copperfield is a well woven tale of a life that has seen many facets of living in 1840’s England. While this may feel like a VERY long time ago, it is interesting that it rings true to the kind of society that operates today. This is all propelled by a great story that has been adapted for modern audiences and a diverse and talented cast that all bring their A-game to the film. It is rare for me to aware a film 5 stars, but this film truly deserves it.

The Personal History of David Copperfield is showing in Australian cinemas from July 2nd.